Discourse on the Thuggee Tribe of British India 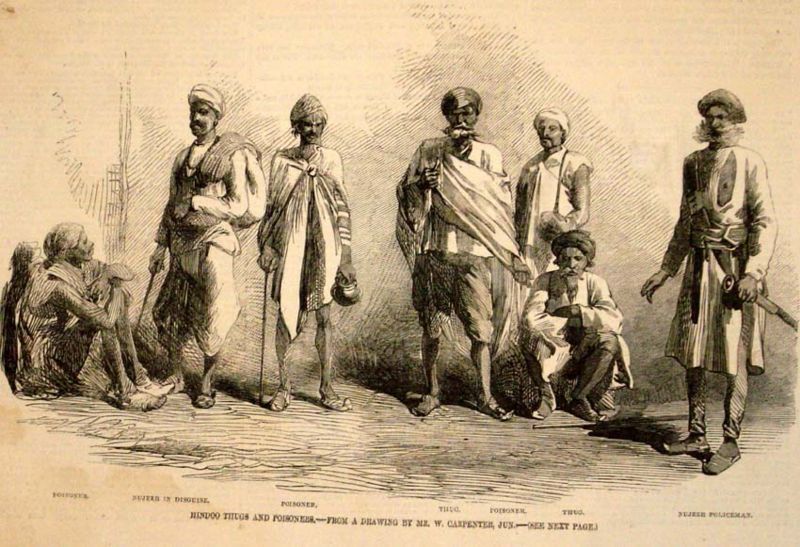 Colonial and Post-colonial Discourse on the Thuggee Tribe of British India:

Analysing Radhika Singha and Kim A. Wagner study on the criminal tribe of British India.

The Imperial rule had a fascination with governance and the art of government. The colonial rule in India tried to explore forms of governance as an experiment lab. India, divided into various distinct communities with diversified identities. Indian communities did not require to break the old system and obey the Imperial rule. England was viewed as a modern society, but people were rigid with any changes. The British philosopher and explorer could not experiment in Britain as people could deny obeying any experiment. In the self-proclaimed modern society, Britain used the logic of providing system governance in a "barbaric society". The Thuggee community was categorised to be barbaric and a community of criminals by the East India Company mentioned in the accounts of British rule in India. The Act of XXX of 1836, a law to terminate the expanding threat to its British legitimacy in India. Any threat to British rule or their experiment process seen as a threat concludes in termination.

Executing a community based on suspicion was a controversial subject in the post-colonial analysis. The English rule of law is an unwritten form of constitution adjusting with a different environment in the state. The rule of law was constantly broken and exploited in the British colonies. To execute an entire tribe based on suspicion was irrational concerning criminalising the Thuggee tribe of India. The colonial rule related to the ‘Thuggee tribe’, describes an illusion of British rule of difference. Colonial and post-colonial philosophers like Radhika Singha and Kim A. Wagner, have emphasised the discourse related to the concept of thugs being a criminal tribe.

In 1830, William Sleeman was the head of the department of the anti-thuggee campaign. Sleeman admitted fabricating the theory to gain a desirable position in the East India Company. That account from Sleeman gives reason for the discourse on the Thuggee tribe's existence. Kim A. Wagner in "The Deconstructed Stranglers: A Reassessment of Thuggee", reflects an important discussion on the Thuggee tribe being either robber or stranger based on social-economic reasons. The social-economic circumstance signifies the Thuggee tribe to engage in robbing. Wagner analysed the reason for robbery: either crops failure or famine or discrimination the society. According to criminological research in British India accounts, the struggle for survival is the major cause of stealing in society. But, the Thuggee tribe was distinct from being just a robber for survival but marked as a criminal 'tribe' among other offenders.

Radhika Singha document on "'Providential' Circumstances: The Thuggee Campaign of the 1830s and Legal Innovation"  issued in Modem Asian Studies, Great Britain. It describes the nature of the despotism of the XXX act in British India. This XXX Act formed to establish legitimacy or a form of supremacy in British India. The concept of the Thuggee tribe spins around a more comprehensive discourse on stereotypes. The British established a distinctive form of universal category between the east and west. Edward Said's book on "Orientalism", describes the eastern as exotic, Barbaric, uncivilised and at times dangerous. The Imperial power forms an image or perception of the east to colonise them and guides governance. Singha elaborates on the systematisation to create law in order by terminating. The Imperial rule established legitimacy through law in the territory of British India. The Thuggee tribe, a community considered a potential threat to the form of legitimacy. It was essential to stop the potential threat with rigid laws for the entire Thuggee tribe. The criminalisation of the entire Thuggee tribe was arbitrary. The termination and criminalisation were unjust in the Britain Empire. This contradicting theory is based on differentiating through the legal doctrine. The trial for an individual from the Thuggee tribe was different from casual offender colonial India. The arbitrariness of the judicial system was a high point in Singha paper. It displayed how a casual offender and an individual from the Thuggee tribe had a different trial system and punishment for the same crime.

The dismissal of the entire tribe to sustain an arbitrary nation based on suspicion is genocide. In 1772, Article 35 of the British India account states the elongated punishment for dacoity from the individual offender to his family and village. An individual from the Thuggee tribe found guilty or caught by the administrator would be punished. Crime committed by an individual, their family and an entire village were punished. The British India administrators justified on the grounds, the dacoits of India were not like other criminals and they were 'robbers by profession. It included robbers from birth which formed into regular communities. Criminal by birth conceptualised in British India accounts to justify their action.

The Thuggee tribe, a community of robber and stranger from birth, was fabricated by the British in the official account. This fabrication was to legitimise the law against the entire Thuggee as a community. The concept of Thuggee as a community or a tribe is a debatable topic. To represent the Thuggee to be a community was a part of the Orientalism perspective. No primary confession or date is stating the Thuggee to be community and they are born as robbers. In the medieval document, the roadside robbery was confirmed in the Mughal emperor Aurangzeb’s Farman from 1672. The document states the punishment for a stranger, but not an entire community of stranglers like the Thuggee. The concept of categorising a community to be a criminal is a hypocritical act. Wagner mentions in his essay that the theory of robberies on the road could not be wrong, but categorising the entire community is false. The Thuggee, a community, was objectified by the British as they were simply different from themselves. As the concept of diversity was rigid during this period as the white was superior to the others.

1 year, 3 months ago by Soundarya_Ravi

The African continent: a territory for international competition