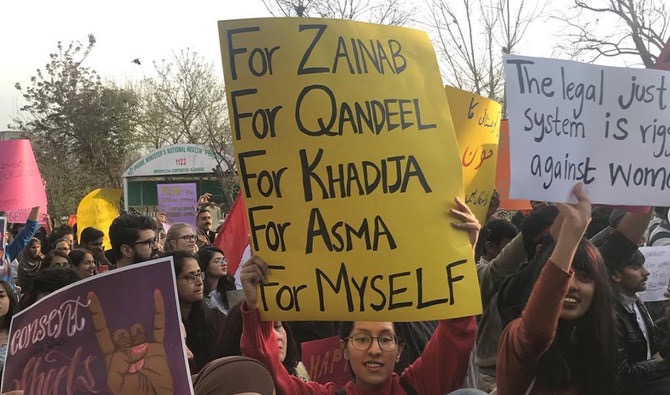 Pakistan has had a bumpy history when fighting against gender-based violence. Time and again the judiciary has let down women who seek justice. While there are some cases that have been monumental and will serve as a precedent for women in the future, some cases continue to underpin the judicial system. One case is the acquittal of Qandeel Baloch’s murderer.

In February, Qandeel Baloch's murderer, her own brother who nearly three years prior took her life under the pretext of honour, was acquitted by the Lahore High court, bringing Qandeel’s case back to where it started. The acquittal also comes as a shock due to the timeline. In 2016 the Amendment was made to the criminal law that stated that Fasad-fil-arz (Honour killing) would be amended under Section 299(e) outlining those offences committed under the pretext of honour would be punishable with life imprisonment as per Section 311. When perpetrators of heinous crimes like that of Qandeel’s murder or seeing Khadija Siddique’s assaulter walk away scot-free brings into question just how legitimate our justice system is. Faith in the system collapses with landmark decisions being overturned. Granting of acquittals sets a different precedent, one which will not deter similar crimes from occurring in the future.

In this unpredictable environment, regardless of the obvious facts of the case, it still seems no one in the country expects justice rather begs for it. It’s appalling to see citizens of Pakistan having to rally together to demand justice for cases because justice seems to be a selective process. Citizens go above and beyond the necessary requirements of the judicial system to pressurize a favourable outcome for victims of abuse.

The landmark decision in the Noor Mukadam case brought about hope for the future of such cases, it also brought into the spotlight the power the rich hold when they commit crimes. With countless sit-ins, rallying online for support and outcry by women all around to demand justice, would this justice have been granted if ordinary citizens did not show their disapproval of the justice system? Thinking back to the Motorway Incident in 2021, it led to a national outcry where citizens protested until the victim was heard. It is still hard to determine the confidence instilled in the judicial system keeping in mind the external pressures it succumbs to, it all circles back to the same question: why have we built a justice system in which women have near to no faith?

While we have seen a handful of changing tides in the Pakistani justice system, it does remain a long way to creating a safer and just system for women. The abolishment of the two-finger test in 2020 within Punjab, the appointment of Justice Ayesha as the first female supreme court judge; commendable strides that have taken us too long to reach.

Another integral adjustment made to the Pakistani Justice system recently was the amendment in the Protection of Women against Harassment at the Workplace Act. The changes made now allow the complainant to include the transgender community, individuals who work in informal jobs as well as holding former employees liable; all of which could not be done in the past. This amendment is integral to the sort of cases women can now bring in. It shatters the blockade that existed before, especially with women who worked in informal jobs where the law could not protect them. Protecting women who are no longer employed by their abusers with whom they previously worked. Or quit out of fear, coercion or even societal pressures now have an outlet that will protect them, or we can hope will protect them. With decisions like these being taken, it gives a beacon of hope to women who strive for a fairer system.

The decision by the state to side with the victim in the Usman Mirza case where video evidence of the abuse existed, showed the commitment toward a safer legislative system to aid women. The victim had previously refused to pursue her case because of the societal pressure that followed, reassuring these victims brings about change in our culture of victim-blaming.

Women lose more when they go forth with a case in this country, to protect purity or ‘haya’ that has been heavily stigmatized. The shame this country brings on victims of abuse is why we fail to get a clearer picture of how dire the need for change in our system is. Support from the state showed we are headed in the right direction and this hope was solidified with Usman Mirza and other culprits being sentenced to life imprisonment.

Now more than ever, we need to stand in solidarity with movements like Aurat March (Women's March) and organizations working to eradicate gender-based violence in Pakistan. These are noteworthy milestones we are achieving but it is a critical point where we need to continuously strive for better if we want systemic change where women do not have to sit fearing whether they should report their case to the right authorities without questioning the outcome. Our system is inherently flawed and a large part of it comes from external pressures outside the proximity of the justice system, yet it is the justice system that continuously succumbs to these very pressures. For an adequate change, we need consistency at the hands of the system. Maybe we will see the due process of law if those who hold the power to grant it, truly understand the meaning of the phrase itself.

Tattoos : A Medium for Women to Narrate Stories