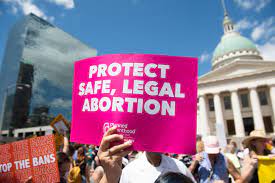 The famous Roe v. Wade decision of the U.S. According to the Supreme Court ruling, the United States Constitution guaranteed the right to an abortion. In 1969, Norma McCorvey found out she was carrying her third child. She filed the lawsuit using the fictitious name "Jane Roe." Texas law forbade abortions unless they were necessary to save the mother's life, which McCorvey needed. Sarah Weddington and Linda Coffee, two of her attorneys, filed a lawsuit on her behalf in a federal court in the United States against Henry Wade, the district attorney in her community, claiming that Texas's abortion laws were unconstitutional.

However, In Dobbs v. Jackson Women's Health Organization, the Supreme Court overturned Roe on June 24, 2022, holding that the substantive right to abortion was neither "deeply anchored in our Nation's history or culture" nor regarded as a right.

No matter their ethnicity, this remark is offensive to women in the United States since it confines them to presumptive, outdated gender roles as equal citizens and weakens them. In the event of an unintended pregnancy, which in and of itself may cause embarrassment, disappointment, or just plain shock, such legislation gives them little chance for a future of independence.

Supporters of anti-abortion legislation believe that this is the same as murder. They view pregnancy as the beginning of life, and neither the woman nor anyone else has the authority to put an end to it. Societal conservative values and religious beliefs influenced many people. If the parents are unable to raise the children, some anti-abortion activists advocate adoption. Others believe it to be only a consequence of women's choices, which must be handled. This is the extent of their argument.

Women experience pregnancy alone, and the demanding physical and mental strain is dreadful. However, having to go through it while being financially precarious and lacking in emotional support might lower many women's quality of life. It appears from the current atmosphere that this component is not even thought to be legitimate in the eyes of the general public or a court of law.

Although not all unintended pregnancies end in abortion, the government must take the women's will into account in situations where doing so would change the path of their lives. The lives that this law is supposed to rescue will suffer, if women are forced into becoming mothers before they are ready. While court proceedings only last a few days, women who are unable to terminate undesired pregnancies must live out the rest of their lives with the decision made for them. There is no democracy here.

The World Abortion Laws Map provides a comprehensive overview of the legal status of abortion in all nations. Center for Reproductive Rights created this map in 1998 as a tool for campaigners, policymakers, and civil society organisations working to expand abortion rights as fundamental human rights for women and girls* worldwide. The legal status of abortion is categorised on the map along a continuum ranging from highly restrictive to very permissive. It is updated in real-time to reflect modifications to national laws, enabling human rights activists to track how nations are defending—or restricting—reproductive rights globally.

Several international and regional human rights treaties and national constitutions safeguard the fundamental human right to safe and legal abortion. These tools enshrine safe abortion in a slew of rights, including the freedom from harsh, inhuman, and degrading treatment as well as the rights to life, liberty, privacy, equality, and non-discrimination. Human rights organisations have consistently criticised restrictive abortion laws as violating those standards.

According to the website, 970 million women reside in nations that generally permit abortion, which accounts for 59% of women of reproductive age. Even though the majority of women live in countries where they have access to abortions, 41% of women do. The inability to obtain safe and legal abortion services impacts 700 million women of reproductive age. World Health Organization estimates that each year, 23,000 women die from unsafe abortions, and tens of thousands suffer grave health consequences. Legal limits on abortion do not reduce the number of abortions; rather, they force women to seek unsafe abortion treatment, endangering their lives and health.

Studies looking at guys who have been in cases involving abortions are rare. When abortion and contraception are discussed, attention is typically on the role and responsibility of the woman. The majority of studies on legal abortion concentrate on women. When a legal abortion occurs, hospital staff frequently only sees the woman; this might lead to the risk of abortion being seen only as a female issue. As a result, the man's involvement is mainly unnoticed. However, many women have claimed that males affect their decisions about abortion, and one of the most often cited motives for doing so is a partner issue.

A woman's or a girl's ability to choose whether to carry a pregnancy to term depends on more factors than just the legal status of abortion. It also highlights the risks associated with unsafe abortion, the likelihood that girls will finish high school, and the restrictions placed on women and girls' participation in public and political life. In other words, monitoring the legal status of abortion reveals places where women and girls are treated equally and have the freedom to decide how they choose to live their lives.

The fact that abortion rights are still being threatened in so many nations, despite the advancements in medicine, is likely related to patriarchal societies' desire to limit women's freedom and their ingrained fears about their ability to regulate their reproductive systems. For instance, in the United Kingdom, a woman must still obtain permission from two doctors before having an abortion.

Because politics is still overwhelmingly male-dominated globally, it is typically men in positions of authority who vote to restrict women's bodily autonomy. We are reminded of this by stark images of male senators endorsing anti-abortion legislation.

Therefore, more male lawmakers need to recognise their obligation to support women. Although things have changed since the 1960s, we still need more women in political positions to make it more likely that their needs and experiences will be considered when making decisions.