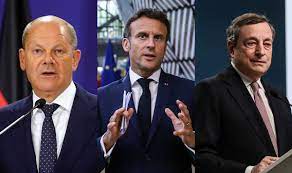 On June 16th, French President Emmanuel Macron, German Chancellor Olaf Scholz, and Italian Prime Minister Mario Draghi arrived in Kyiv. Their visit aims to defuse domestic criticism of their approach to the conflict. They are the first European Union leaders to visit Ukraine since the beginning of the war on February 24th. The three leaders set off on a train to Kyiv from Poland early this morning.

This visit follows a series of criticisms leveled at the three countries by Ukraine for having been slow to send weaponry. The three countries have supported ceasefire and negotiations more than fueling the conflict by delivering more armaments. The main concern, as expressed by the French President Emmanuel Macron, is that a destabilized Russia will have consequences for Europe, making the normalization of energy links even more difficult. This prompted some countries to take a more realistic approach and push for a resolution to the conflict, even though this would imply a significant loss of land for Ukraine.

A similar position was held by the German Chancellor, Olaf Scholz. In a telephone call with Russian President Vladimir Putin, he stressed three main points, later reiterated in a Tweet: the need for an immediate ceasefire; the claim that Nazis are in power is false; and a reminder about Russia’s responsibility for the global food situation. The demand that Russia recede and withdraw its military contingent from Ukraine was notably absent. The German Chancellor was among those leaders who preferred to postpone sending heavy equipment over to Ukraine, opting for sanctions and diplomatic solutions instead.

Likewise, after meeting with US President Joe Biden, Italian Prime Minister Mario Draghi stressed the importance of a peace deal. While he agreed on the importance of assisting Ukraine and pressuring Moscow, he also stressed the need to start credible peace negotiations as soon as possible. Notwithstanding the hard line adopted against Russia after the February 24th invasion, he said it is important to stick to the economic sanctions if the EU wants to bring Moscow to the negotiating table.

If compared with the declarations released by the US, the contrast is visible. After a visit to Kyiv in late April, Secretary of Defense Lloyd Austin stated that Washington believes Ukraine "can prevail." On the same note, Karen Donfried, Assistant Secretary of State for Europe, stated that while the US hoped the war would be resolved through diplomacy, the administration's priority was to assist Ukraine in defending itself.

While Zelensky is harshly criticizing Germany and France, and to a lesser extent, Italy, in a recent poll held in ten European countries, people seem to favour peace talks more. Accordingly, although Europeans are united in their support for Ukraine and sanctions against Russia, they are divided on the long-term objectives. They are split between a "Peace" group (35%) that wants the war to stop as soon as possible and a "Justice" camp that feels punishing Russia is the more immediate goal (25% of people). Except for Poland, the "Peace" camp is greater than every country's "Justice" group. Economic sanctions are causing concern among European residents, as is the possibility of nuclear escalation. They will resist a protracted conflict unless something drastic happens. Only Poland, Germany, Sweden, and Finland have significant public support for military budget increases.

This clear divide regarding the EU countries` support of the war in Ukraine will also determine Ukraine's membership in the EU. By the end of next week, Ukraine will know if it can begin joining the European Union. On Saturday, European Commission President Ursula von der Leyen paid a surprise visit to Kyiv, where she briefed President Volodymyr Zelenskyy on negotiations over whether to endorse Ukraine as a candidate for membership. This would be the first step in Ukraine's admission to the European family, which, nevertheless, would take years because a fast-tracked admission has been ruled out. Accordingly, the European Commission President stated clearly that the EU needs to see results. Ukraine still has much to accomplish to establish a strong rule of law regime, fight corruption and modernize the administrative apparatus.

On its side, China is expressing its support for Russia in the security sector. Since the beginning of the conflict, Beijing has refused to condemn Russia's invasion of Ukraine or even to mention it by that name, accusing NATO and the West of inciting Moscow to fight. On Wednesday, during a phone call between the two leaders, Xi Jinping confirmed China's support on issues concerning security and sovereignty. The Chinese leader stressed Russia's legitimacy to undertake actions to protect its national interests against challenges coming from external actors.

In the meantime, Kyiv is welcoming the three European leaders. On his way to the Ukrainian capital, Scholz declared today that this visit aims not only to show solidarity but to continue providing financial and humanitarian help, including weapons. He does not rule out though that the sanctions already in force may play a determining role in a possible Russian withdrawal.  This declaration may stand at odds with what was stated by the German ambassador in Kyiv regarding the latter`s request for heavy weapons, particularly Leopard and Marder tanks. As this support has not materialized yet, the German Chancellor is expected today to address the issue of Germany`s position in the overall conflict.