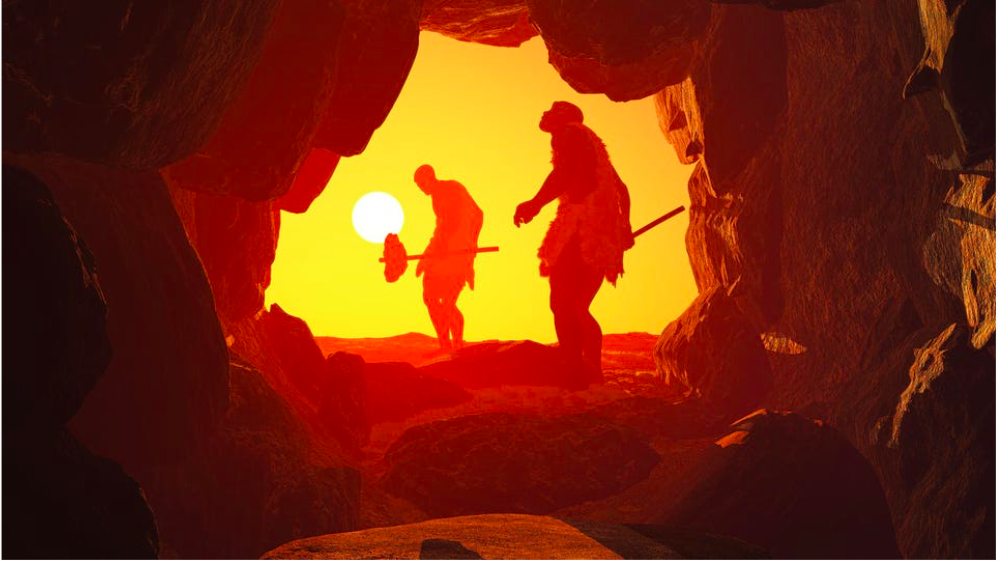 Time and again, paleontologists come across the fossilized remains of exotic species from different excavation sites - be it deep burrows or caves, riverbeds, mountain passes, etc. But it's scarce that one finds some unique fossil as a commodity preserved by someone.

The fossil discovered the unconventional way is claimed to be unique and belongs to a species having the closest resemblance to us, Homo Sapiens.

In 1933 while working on constructing the Dongjiang bridge as part of the Japanese Imperial Army's Railroad Expansion Project near Songhua River in Hubin, North-Eastern China, a local laborer found a unique looking Human skull.

At that time, intense interest was brewing in Japanese paleontologists working in China due to the discovery of Peking Man's remains in 1929 (late Homo Erectus). Considering his discovery carrying a cultural significance and to protect it from subjugation by Japanese foreign authorities, the labor concealed the skull in an abandoned well near his home. He even covered his rail-worker identity after that, so apprehensive he was about the discovery.

He kept it a long-hidden truth only to reveal it at his death bed in 2018. Upon revelation, his 3rd generation descendants carried out the excavation. Coming to know of the discovery, Chinese Paleontologist Ji Qiang from Hebei GEO University, Shijiazhuang, persuaded the family to donate the skull for study. The family eventually agreed. The skull has been restored at the university since then.

The first thing researchers did was to determine the age of this peculiar-looking human skull. They already had the feeling that it was an entirely unique specimen they were laying their hands on.

They performed different non-destructive geochemical analyses like X-ray fluorescence, rare-earth element, strontium isotope analyses, and Uranium-Thorium dating to determine the skull's age. Based on their finding, it was most likely estimated to be around 146,000 years old. But since its exact provenance is unknown (as no other similar sample is found in the region before), it was just a rough estimate.

Ji Qiang and his colleagues published three subsequent papers reporting the finding in the peer-reviewed journal The Innovation on June 25, 2021. They dubbed the Harbin skull as a new species, ''Homo Longi'', nicknamed Dragon Man, in reference to the region where it was discovered- Long Jiang or the Dragon River in English.

It is now being compared to a similar-looking skull that was discovered in 1978 in Dali, China. The Dali specimen was dubbed Homo daliensis. The specimens share the same family tree along with Xiahe, Hualong, Jinniushan, and Homo antecessor. In fact, the tree belongs to the occupants of the Middle-Late Pleistocene Period (~200,000 years BC), when many other different human species walked the earth. 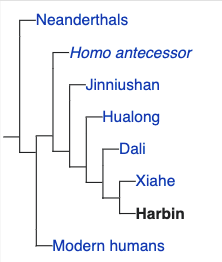 Based on nuclear DNA & ancient Protein analyses, the family of H. Longi is claimed to belong more closely to H. Sapiens but anatomically resembles our infamous cousins Denisovans and Neanderthals. Upon this finding, Xijun Ni, a Professor at Hebei GEO University and part of the study team, said- "We found our long lost sister lineage."

It was said to be on its way to become like H. Sapiens even though being separated genetically. Sadly, it went extinct before that.

Many claims are being made that only further studies can clarify. Such controversy makes this discovery all the more fascinating, adding more clues to known facts.

The skull has a low and long stature, receding forehead, large nasal cavities indicating a broad nose, large and square eye sockets, thick brow ridges, flat cheekbones, and a big tooth socket. The structure can be likely confused with those of Denisovans. The features resemble modern human anatomy more than any other human species discovered so far.

"It has a mosaic combination of primitive and more modern features, setting itself apart from all the other species of humans," said Prof. Qiang Ji. 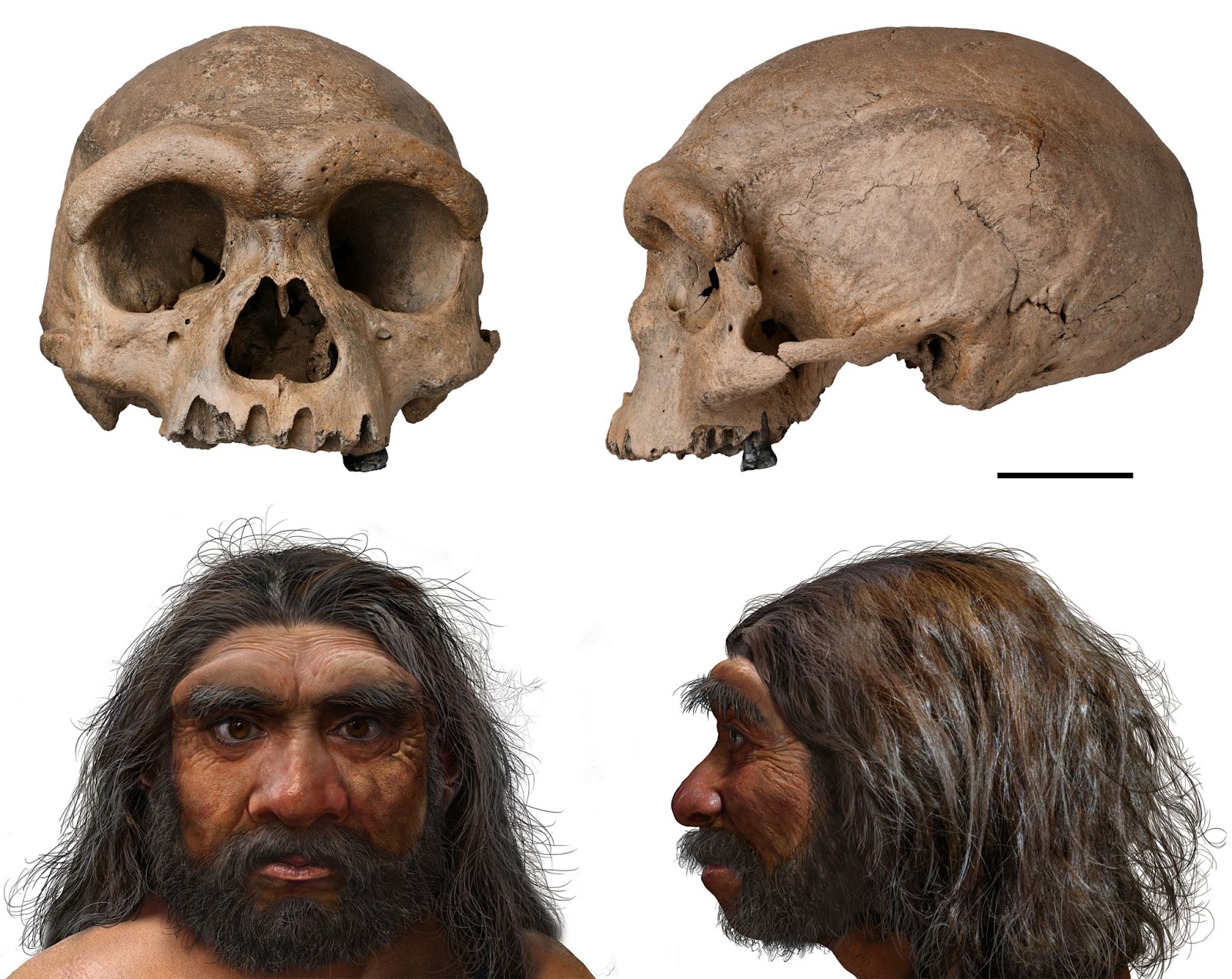 A representation of Dragon Man

The Dragon man must have been powerfully built and rugged with a massive brain size of 1420 cc, next only to Modern Humans and Neanderthals. Judging by the size and robustness, with signs of tooth wearing, the skull is claimed to belong to a male in his 50s. It had medium-dark to medium-light skin with dark-colored hair and eyes based on studies done for Denisovans.

The Period 300,000 - 100,000 BC spans the Glacial Period (Ice Age). The permafrost at that time extended beyond Central China. Hubin must thus have been covered with sheets of ice at the time when Dragon Man lived. It probably lived along the forested floodplains in small communities of hunter-gatherers.

It must have borne harsher climatic conditions than European Neanderthals, which could have made it highly adaptable. Better adaptability might thus have allowed it to travel and spread throughout Asia. It also might have got the chance to mingle with the Homo Sapiens.

The landscape then was home to wooly animals like wooly Mammoths and wooly rhinoceros. Besides, it must have inhabited Giant Deer, Elk, Buffaloes, Przewalski's Horse, Brown Bear, etc. Dragon Man could have foraged some of these animals to meet its dietary requirements apart from hunting birds, gathering fruits and vegetables, and catching fish.

Up till yet, Neanderthals were widely believed to be our closest relative. However, the discovery of Dragon Man took that crown. It suggests that we still have new dots to connect and new discoveries to make.

The now updated human evolutionary tree suggests that the common ancestor shared with Neanderthals exists even further in time.

"The Divergence time between Homo Sapiens and the Neanderthals may be even deeper in evolutionary history than generally believed, over one million years" said Professor Ni, shedding light on the uncertainty.

There are still doubts among certain groups regarding the discovery. Some claim it to be primitive ancestors of Homo Sapiens, while others claim that it belongs to Neanderthals or Denisovans.

Since the jawbone of Dragon man looks similar, it is being correlated with Denisovans. A researcher from the University of Cambridge claimed- ''we might actually be looking at the first face of Denisovans.''

A group studying fossil records in Israel of supposed ancestors of Neanderthals claims that Dragon Man could be descendants of Humans that emerged in the Levant region (near Eastern Meditteranean of West Asia).

Meanwhile, Chinese researchers are firm with their belief that Dragon Man altogether represents a new species that gradually emerged in East Asia.

The truth will only be unfolded with future findings.