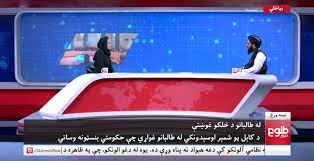 Tolo TV is the most watched Afghan broadcaster, launched in 2004. Known for its independent editorial line since its foundation, it tries to maintain its independence under the Taliban regime. An example of the sturggle with the regime is the schedule: with the animation series Burka Avenger in which a heroine fights against bad guys who want to close school and with news programs often led by women.

WHAT IS TOLO NEWS

It is a channel that attempts to put women at work in the entertainment and journalism sectors. The resistance lies in pretending the Taliban are not in charge and keep working as usual. At the beginning of the week, Tolonews metaphorically made his male presenter wear a burka.

On Monday, the Taliban edict entered into force, obliging women to wear the burka: a religious dress covering the entire body. Dark colors are preferred, and the fabric must be thick, so that female’s shape won’t be recognized.

New rules are big problems for many women, even on the broadcast TV, where women are slowly disappearing.

On Monday, the conductress of the Tolotv had to choose whether to wear a burka or to stop working; solutions arrived from the men. Indeed, their male coworker came to work with their face covered to transmit the message and shows solidarity through their colleagues.

In addition to showing solidarity with female speakers, an important goal of this polite gesture was to bring the issue to the attention of appropriate officials.

“We were told to implement this (decision) by the deadline, which we did today. But our arguments are twofold: first, there was no clear signal regarding covering female presenters' faces on TV programs in the Islamic Emirate's recent Hijab edict. Second, the images of female presenters on TV are virtual and do not represent the actual presence of women, and hence TOLOnews maintains its position on this issue," Sapai stated.

"I can't breathe or speak properly; how will I conduct the program?" remarked Khatira Ahmadi, a TOLOnews female broadcaster.

HOW IS TOLONEWS INNOVATIVE

Right after the Taliban took control of the country last August the channel hasn't stopped transmitting inconvenient messages for the Taliban about the functionairs’ executions of the past government.

Every day, Tolonews makes up stories tricks every day, trying to tell the news that is thorny to the Taliban, and by giving many examples of the events going on now under the new government. Their method is to use different words in the title so that the government won’t stop the story from being published , and then tell the truth in the article.