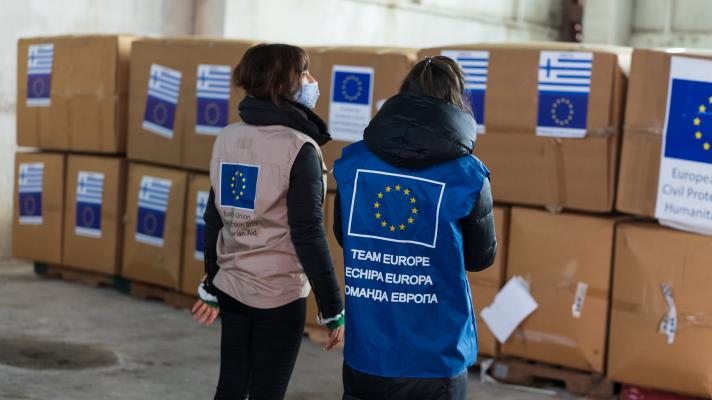 The European Union announced on Sunday the allocation of 50 million euros for humanitarian aid that will be sent to Ukraine and the Republic of Moldova, the European Commission reports.

Moldova is one of the countries targeted by this humanitarian aid due to the decision of the European Union to consider the territory of Transnistria as a territory occupied by Russia. Furthermore, this assistance appears to be for the plight of refugees who have entered the Republic of Moldova's territory.

A total of 45 million euros has been set aside for humanitarian initiatives in Ukraine, with five million euros going to Moldova, where hundreds of thousands of Ukrainians have sought safety since the war began.

The amount is part of a € 1 billion package promised by the European Commission at last week's donors' conference entitled Stand Up For Ukraine. 143 million has already been spent on humanitarian help for individuals harmed by the Russian incursion, according to the statement.

The funds announced on Sunday will be used for emergency medical services, access to safe drinking water and hygiene, shelter and protection, financial aid and combating violence against women.

We will watch the lines brought by the Russian camp, considering all of this humanitarian help.Vladimir Putin has maintained a firm stance on Western countries since the beginning of the war. He wanted them to stop intervening in the conflict between Ukraine and Russia.

As the situation stands today, this has not stopped. The European Union is assisting Ukraine with money and military resources. The United Kingdom also provides military and financial support and continues to revolt against Putin. Prime Minister Boris Johnson is even coming to Ukraine for a tour de force.

These moves on the geopolitical scene may provoke hasty reactions from the Kremlin leader. Given his horrible act of going to war, we cannot know for sure what his future moves would be.

At the same time, Ukraine is still dependent on the help of Western countries, and this can only make Vladimir Putin more motivated to act against countries sympathetic to Ukraine.

With this assistance, the West is attempting to become engaged while maintaining a cautious stance to avoid sparking a large-scale confrontation. The last world war left a stain on human history, and about 70 million dead. The blood of the whole human species is trying not to be shed by another large-scale conflict, so Western countries are trying to maintain a position as appropriate as possible to the conflict between Ukraine and Russia.