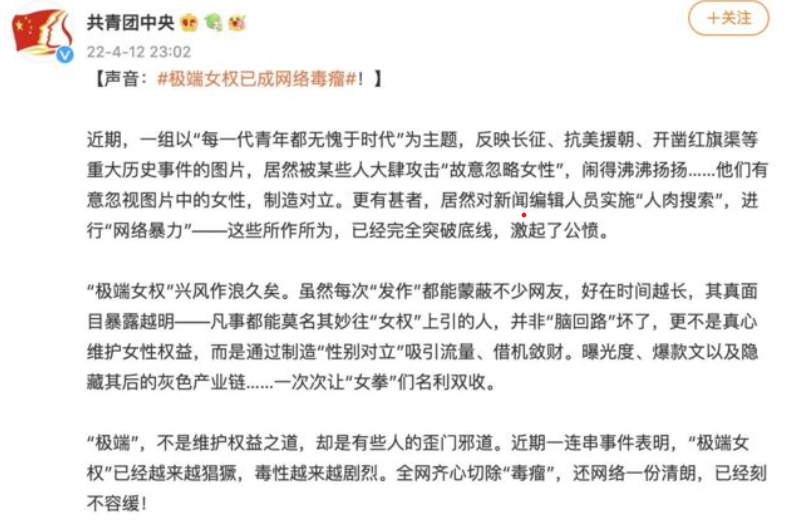 “The ‘extremes’ are not the way to defend rights. ‘Extreme feminism’ has become more and more rampant and virulent. Let the whole internet together cut out the ‘tumour’ and return the network to a clean environment…”

Followed by this article published by the Central Committee of the Communist Youth League of China (CYLC) on April 12, heated discussions were set off.

The article published on Weibo by the Central Committee of the CYLC was a response to the debate on their former article on April 2. This article was on “Every generation of youth is worthy of its time” and “Every generation has their own Long March”. Here “Long March” stands as a metaphor for the long and arduous journey to achieve the faith. Several photos were published with the article reflecting the greatness of the struggle of the elder generation during historical moments like the Long March, the Korean War, the construction of the Red Flag Canal, etc.

Under the comments of the article, the pandemic situation in Shanghai was most debated by netizens. There were also discussions about the content of photos, that the sex ratio of people shown in the photos is imbalanced. The latter was screenshotted and replied to by CYLC’s official account in the article on April 12.

There were a lot of people against the opinion of CYLC. For instance, some published several photos including at least half of the women to reflect a Chinese saying by Mao “Women hold up half the world”. While most of the comments just affirmed women’s contribution verbally, it was claimed by CYLC that there are people implementing "cyber manhunt" and "cyber violence" against news editors. As CYLC says “some people have deliberately ignored the women in the images and created antagonism”.

Besides against or defending the women’s ratio itself, more debates were held on the word “extreme feminism” used by CYLC.

CYLC holds that “extreme feminists" are not really defending women's rights but attracting a number of views by creating "gender antagonism" and making money from it.

In recent years, the debate on gender equality has grown more and more intense on the Chinese internet platforms. Especially on Weibo and Douban, where a lot of young people share their opinions, particularly after the event of Xuzhou Chained Women. People mostly accept the value of gender equality but have different attitudes towards feminism. It seems those who speak for women’s rights are categorised under “moderate feminism” or “extreme feminism”. While arguing whether the “extremes” are wrong, maybe the classification itself is debatable.