Extreme Heat Is on the Rise: What Are the Health and Social Consequences? 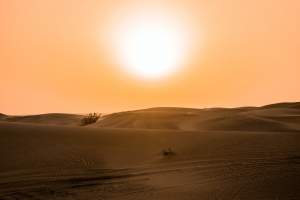 Climate change is putting human communities to the test. With alarming rising temperatures, some of the world’s most densely populated areas are becoming practically uninhabitable. Climate disasters are becoming too severe, and the costs of remaining in these areas have become unsustainable for millions of people, with the most vulnerable bearing the brunt of the consequences.

The world is now 1.1 degrees Celsius warmer on average than it was at the dawn of the Industrial Revolution (Vox).

In the latest (2022) assessment from the United Nations’ climate change research group - the Intergovernmental Panel on Climate Change (IPCC) - data have provided one of the most comprehensive examinations of the intensifying effects of climate change and the potential dangers, especially for resource-poor countries and marginalized communities.

UN Secretary-General Antonio Guterres has called the report “an atlas of human suffering and a damning indictment of failed climate leadership”.

The IPCC report contains no new information, but it summarizes and assesses the quality of existing research. However, it has provided a much better understanding of how global warming is affecting the planet.

The report distinguishes between two types of adaptation limits, which refer to the point at which an actor’s objectives or system needs cannot be protected from emerging risks through adaptive actions. (IPCC).

“Soft” adaptation limits are scenarios in which options for dealing with the effects of climate change exist but are not available due to cost or technological constraints. “Hard” limits are those in which physical changes are so extreme that risk reduction is impossible.

As the report states, “ecosystems already reaching or surpassing hard adaptation limits include some warm-water coral reefs, some coastal wetlands, some rainforests, and some polar and mountain ecosystems” (IPCC).

Climate change is pushing our natural environment to some of its breaking points, causing irreversible changes in ecosystems. Humans, who rely heavily on these ecosystems, are also severely impacted. Water scarcity, extreme heat, and flooding have disrupted millions of people's food security and livelihoods (see the previous article The Great Climate Migration).

Today, half of the world's population experiences water scarcity at least once a year, and wildfires are scorching larger areas than ever before. Higher temperatures facilitate the spread of diseases such as Lyme disease, malaria, and other water-borne diseases like cholera (World Resources Institute).

Extreme temperatures are taking place all over the world. Triple-digit temperatures continue to spread across vast areas of Pakistan and India, which are home to 1.5 billion people.

In Bangladesh, two heat waves swept across different parts of the country in early April 2022, with temperatures reaching 41.2 degrees Celsius. These weather conditions have killed at least 25 people in India and 65 people in Pakistan, with the death toll expected to rise.

Temperatures have also risen in Western Europe, where maximum daily temperatures relative to average are currently among the highest in the world.

In the US, Texas has experienced a record-breaking heatwave, with six power plants abruptly shutting down.

There is an urgent need for humanity to implement stricter measures and drastically reduce greenhouse emissions that are warming up the planet. As individuals’ lives and livelihoods are at stake, global warming is one of the most pressing technological and political challenges. Strategies for dealing with extreme heat reveal a paradox: the people most vulnerable to extreme heat are also the ones least able to counteract it.

Everything comes down to addressing issues of equality and justice. High temperatures can easily result in a chain reaction of negative economic and social effects.

According to a recent study “annual economic losses in the US have already amounted to $100 billion due to reductions in labour productivity” as a result of extreme heat (World Economic Forum). The social consequences are self-evident, as when temperatures reach 37.78°C, the risk of injury increases by 10% to 15%.

Heat-related casualties are avoidable, and natural solutions exist for mitigating such risks. There must be a globally shared responsibility for the planet and how we act as a population. This must be strengthened by raising awareness of heat-related risks in urban areas, educating decision-makers, and providing them with actionable solutions (World Economic Forum). All of this will result in positive changes in how we address and deal with extreme heat, paving the way for a more sustainable, long-lasting, and prosperous future.