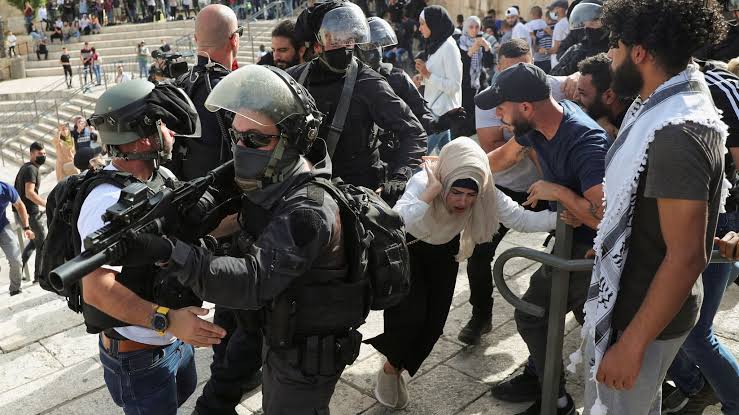 In a conflict with Israeli riot police within Jerusalem’s Al-Aqsa Mosque compound on Friday, at least 152 Palestinians were injured, the latest in a recent increase of violence that has fueled fears of the return of a wider conflict.

According to the Palestine Red Crescent, the majority of the Palestinian injuries were caused by rubber bullets, stun grenades, and police baton beatings at the most sensitive site in the decades-long Israeli-Palestinian conflict. Following a string of deadly Arab street attacks across the country over the past two weeks, Israeli security forces have been on high alert. Confrontations at the Al-Aqsa site in Jerusalem’s walled Old City raise the possibility of a recurrence of last year’s Gaza conflict. The Al-Aqsa compound, which is known to Muslims as al-Haram al-Sharif, or The Noble Sanctuary, and to Jews as Temple Mount, is located atop the Old City plateau of East Jerusalem, which was taken by Israel in the 1967 Middle East conflict. The fact that Ramadan falls on the same day as the Jewish holiday of Passover has added to the tensions this year. After Ramadan morning prayers, hundreds of Palestinians hurled firecrackers and stones at Israeli police and toward the nearby Jewish prayer place of the Western Wall in the Old City, according to an Israeli police statement. Police were also alleged to have entered the Al-Aqsa Mosque to “disperse and push back (the throng) and allow the rest of the worshippers to leave the location safely,” according to the report. Three officers were reportedly injured in the clashes. Hundreds of Palestinians were detained by Israeli police, according to a tweet from Israeli Prime Minister Naftali Bennett’s office. We are preparing for any scenario and the security forces are ready for any task,” Bennett said. As per a Palestinian official, Egypt, Qatar, and the United Nations have increased their mediation efforts between Palestinian groups – led by the Islamist group Hamas, which controls Gaza – and Israel in order to avert further escalation of bloodshed. Hamas asked that Israel release almost 500 individuals jailed on Friday, Jewish groups refrain from making “provocative trips” to the Al-Aqsa Mosque and that Israeli incursions into West Bank cities be halted.

According to Palestinians, Israel released all but 100 of those imprisoned, indicating a reduction in hostilities. As per Nabil Abu Rudeineh, a spokesperson for Palestinian President Mahmoud Abbas, who governs self-ruled areas of the Israeli-occupied, the international community should intervene promptly in the West Bank to “halt Israeli aggression against the Al-Aqsa mosque and prevent things from spiralling out of hand." The Israeli police raid was described as a “severe trespass” by Jordan’s Hashemite monarchy, which is in control of Muslim and Christian sanctuaries in East Jerusalem. As Palestinian assailants murdered 14 Israelis in a series of strikes in Israeli cities this month, Israeli troops have killed 29 Palestinians during operations in the West Bank. Al-Aqsa is the third holiest site in Islam, as well as the site of two ancient Jewish temples. Israel claims Jerusalem as its eternal capital in its entirety. Palestinians want East Jerusalem to be the capital of a future state, with its Muslim, Christian, and Jewish sacred sites. As part of the two nations’ 1994 peace accord, Israel acknowledged the Hashemite's role as custodian of Al-Aqsa and maintains ultimate security authority over the site. More than 150 people were injured in conflicts between Palestinian activists and Israeli police in Jerusalem’s Al-Aqsa mosque compound on Friday, prompting the US to express “grave concern.” We call on Palestinian and Israeli officials to work together to reduce tensions and protect everyone’s safety.” Hundreds of masked men marched into Al-Aqsa, setting off fireworks before mobs flung stones at the Western Wall, which is considered the holiest spot for Jews to pray, according to Israeli police.