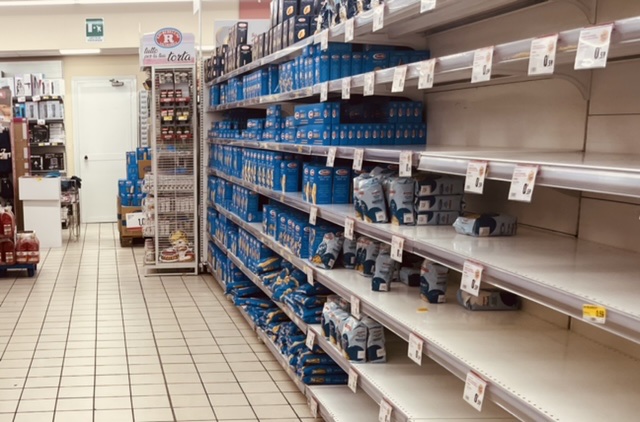 Empty bread, oil, and pasta Shelves are becoming more common in European supermarkets, including Italy. Italy was one of the countries highly affected by the Covid-19 pandemic crisis. The high mortality rate and the cessation of the tourism industry put a lot of economic pressure on Italy. After the pandemic, Italian citizens are now facing whispers of a new crisis.

Italian Prime Minister Mario Draghi has already warned the European Union about the serious food crisis. Draghi indicates that the crisis is happening while European Union is still dealing with the consequences of the greatest health emergency of the last century.

The market situation for agricultural products is critical. Grain exports from Russia and Ukraine have been largely halted due to the war. Russia and Ukraine are known as European grain warehouses and exporters of grain to many countries.

Most of these exports go through the Black Sea, which has now been blocked as one of the most significant international grain trade routes due to Russia's invasion of Ukraine. Russia recently shocked the agricultural market by announcing the restriction on exports of wheat, barley, rye, and other grains.

The most significant consequence of the Ukraine war is an increase in energy prices, which is also linked to the supply of agricultural products.

Italy's inflation has increased by 7% compared to the previous year; which is the highest level in the past three decades.

The government has spent more than 16 billion euros to reduce the impact of rising energy costs on households and businesses and has recently passed other measures, including a reduction in fuel tax on pumps. The Ministry of Finance will shortly reveal its new budget plan, which may include growth and deficit objectives.

Despite the increasing government supports, what seems to be troubling the Italian people is the fear of widespread hunger in the future and the global food crisis. This is what makes supermarkets empty so quickly as soon as essential food items such as flour, bread, oil, and pasta are available.

Whether the fear of entering a long-term crisis is due to the prevailing psychological tension or a transient challenge, Italy is stepping towards a whole different era.

4 months, 3 weeks ago by yasssarv

What an interesting topic!