Forced Marriage and Conversion in Pakistan 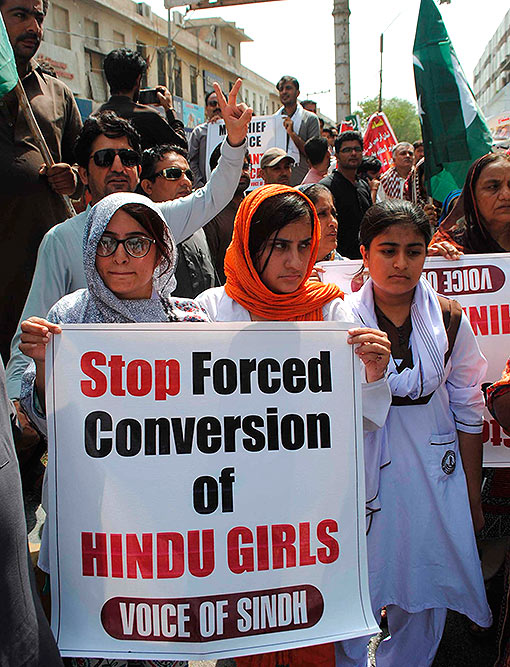 In Pakistan, girls belonging to the minority Hindu, Christian and Sikh communities are abducted and forcefully married and converted to Islam. Alleged forced conversion of underage girls belonging to the Kalash community was also publicized in media. Most of the targets include girls from lower castes and poor families. Such cases of forced conversions are being reported increasingly in the Southern districts of Tharparkar, Umerkot, Mirpur Khas and in South Punjab, particularly the Rahim Yar Khan District. Some of these victims are as young as 12 years old.

It has been estimated that 1000 women and girls from religious minorities are captured, forcibly converted and then married off to their abductors every year. Former vice-chairperson of the Human Rights Commission of Pakistan, Amarnath Motual, notes that 20 or more Hindu girls are abducted every month in Pakistan. The volunteer group, Responsible for Equality and Liberty, also assesses that between 20 to 25 Hindu girls are forcibly converted every month. Pakistan has signed and approved the International Covenant on Civil and Political Rights and ratified the Convention on the Elimination of Discrimination Against Women (CEDAW), of which Article 16 confirms the right of every woman to enter into marriage "only with their free and full consent". Pakistan has accepted the Child Rights Convention, of which Article 14 (1) states that state parties need to respect the right of children to freedom of thought, conscience and religion. 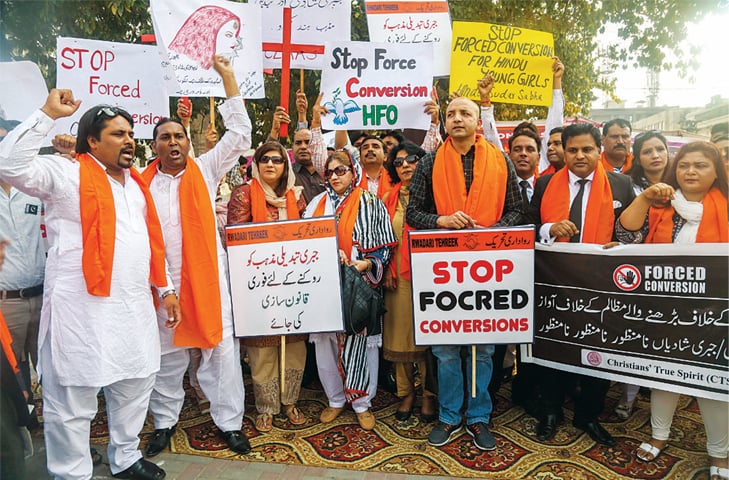 The reality of forced conversion and forced marriages in Pakistan is that in most cases, the victim is abducted and is then subjugated to sustain emotional and physical abuse often comprising threats of violence towards their loved ones. Evidence provided by numerous NGOs, journalists and academics has exhibited abduction and forced conversions are some of the most serious problems facing Hindu and Christian female population. Minorities often do not receive security from the institutions of the state and they lack access to justice. The Human Rights Commission of Pakistan summaries that the police constantly turn a blind eye to reports of abduction and forced conversions thereby creating impunity for perpetrators. The police will often either refuse to record the First Information Report or falsify the evidence, thereby denying families the chance to take their case any further. Both the lower and higher courts of Pakistan have failed to follow proper procedures in cases that entail accusations of forced marriage and conversions.

The judiciary is often subject to fear of reprisal from extremist elements, in other cases, the judicial officer's personal beliefs influence them into accepting the assertions made by the woman/girl converted on her own free will. There is often no inquiry into the circumstances under which the conversion takes place and the age of the girl is omitted. The girl/woman involved is largely left in the custody of her kidnapper throughout the trial process where she is subject to further threats to force her into denying her abduction, physical abuse and claiming that the conversion was voluntary. Many religious institutions, local mosques and seminaries fail to investigate the nature of the conversion or the age of the bride and mostly accept the word of the abductor. Some organizations, like Minhaj-ul-Quran, routinely and as a matter of official policy encourages the practice of converting members of minority communities by offering rewards for successful conversions. They say that it is the equivalent of Haj-e-Akbari or the greatest religious duty to Muslims. Karachi, Pakistan - Neha loved the hymns that filled her church with music. But she lost the chance to sing them last year 2020 when at the age of 14, she was forcibly converted from Christianity to Islam and married to a 45-year-old man with children twice her age. Neha is one of nearly 1,000 girls from religious minorities who are forced to convert in Islam in Pakistan each year, largely to pave the way for marriages that are under the legal age and non-consensual. Human rights activists allege the practice has accelerated during lockdown against COVID-19.

The US State Department declared Pakistan "a country of particular concern" for violations of religious freedom in December 2020 - a designation to which the Pakistan government dismisses. The declaration was based in part on an appraisal by the US Commission on International Religious Freedom that underage girls in the minority Hindu, Christan, Sikh and other respective communities were "kidnapped for force conversion to Islam… forcibly married and subjected to rape." 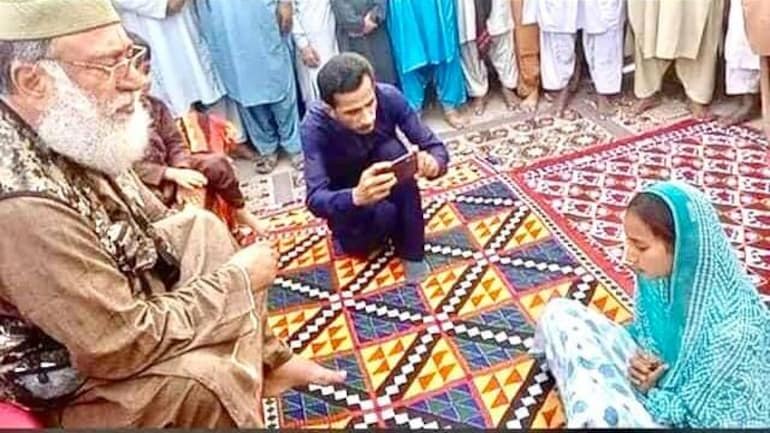 Forced conversions thrive unchecked on a money-making web that involves Islamic clerics who solemnize the marriages, the magistrate who legalizes the unions and corrupt local police authorities who aid the culprits by refusing to investigate or sabotaging the ongoing investigations, concludes child protection activists.