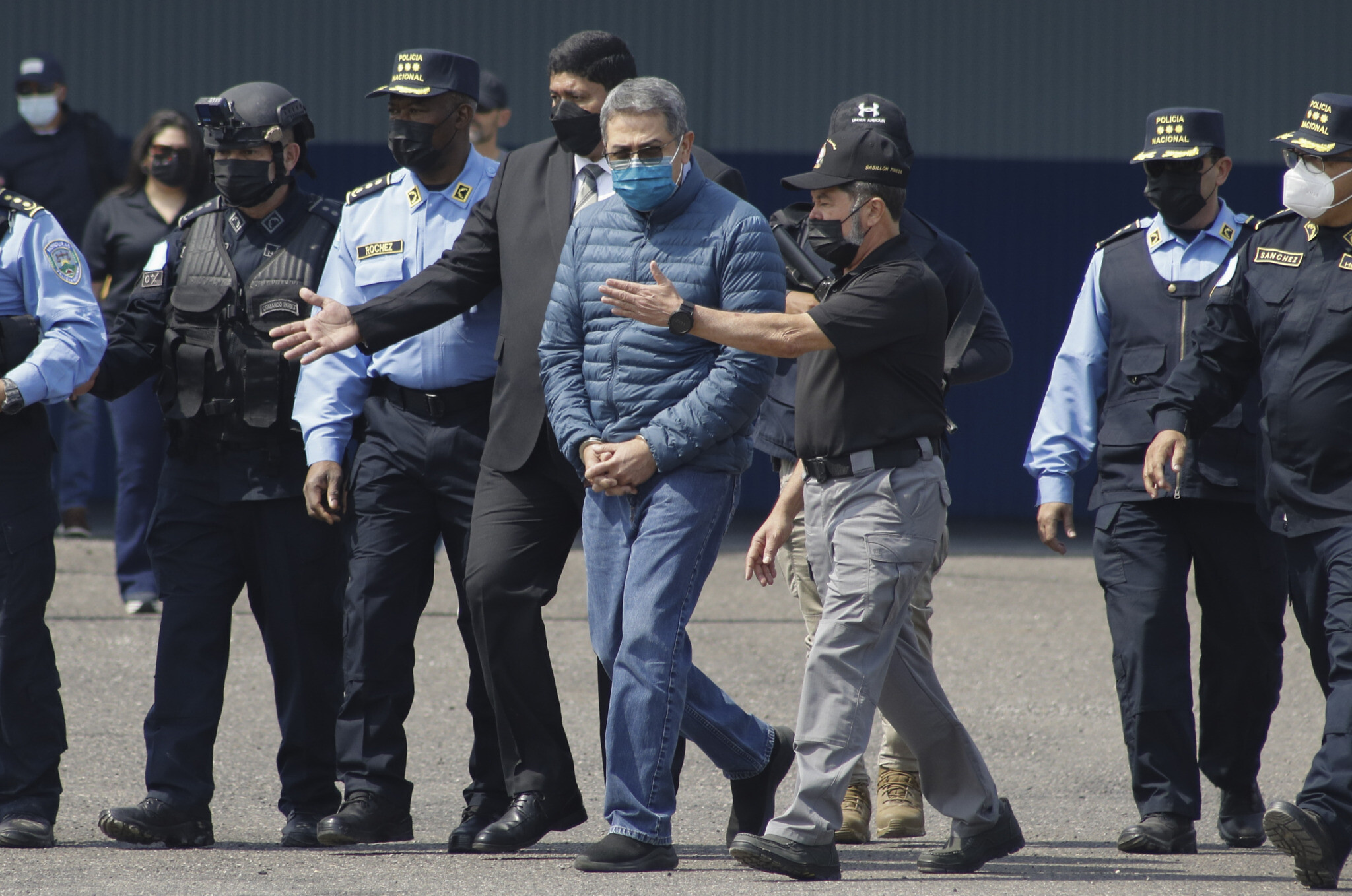 Former Honduran President Juan Orlando Hernandez was extradited to the United States on Thursday, where a New York court will try him for allegedly participating in the trafficking of 500 tons of cocaine between 2014 and 2022, a charge for which he risks life imprisonment.

Hernandez, 53, was airlifted to the U.S. Drug Enforcement Agency and is due to appear before a judge in New York on Friday.

On February 14, a federal court in Manhattan filed an extradition application in his name for alleged involvement in a "criminal group that transported more than 500 tons of cocaine to the United States."

In a statement issued Thursday, US Justice Minister Merrick Garland accused him of "abusing Honduras's presidency from 2014 to 2022 to make the country function as a narco-state".

"Hernandez is suspected of receiving millions of dollars from several drug trafficking organizations," Washington said, citing a $ 1 million bribe in 2013 from El Chapo, the head of the Sinaloa cartel, in exchange for a promise to protect drug cartel trafficking in Honduras'.

Juan Orlando Hernandez, who had presented himself as a champion in the fight against drug trafficking, was first seen by the United States as an ally in this fight.

Honduras is a relatively small country in Central America. During the 1980s, there were solid political tensions amplified by the presence in the land of approx—35,000 refugees from neighboring states. The first signs of relaxation appeared in 1987, with the signing of the peace plan in Central America (the Esquipulas plan), along with Costa Rica, Nicaragua, El Salvador, and Guatemala. The normalization process was marked by the time of October 1989, when general elections took place.

In June 1990, the disarmament process of the guerrilla groups ended. But the period of insecurity dominates most of the country throughout this decade. There has been a rotation between the National Party and the Liberal Party administrations. In the 1990s, Honduras gained some degree of economic independence from the United States, leading to better regional cooperation and integration. This was facilitated by the conclusion of the 1992 agreement with El Salvador, putting an end to border disputes between the two countries.

Honduras is currently facing the problem of drug production and trafficking and a relatively high rate of insecurity. These current problems are rooted in the political and social issues mentioned above.

Washington was one of the first capitals to recognize its re-election in 2017, while the opposition denounced fraud amid protests in which 30 people died.

In March 2021, the U.S. judiciary sentenced his brother, former MP 'Tony' Hernandez, to prison for his involvement with traffickers in these transports to the USA. U.S. prosecutors believe the former president was also involved in bringing in hundreds of tons of cocaine.

"I am innocent; I am the victim of revenge and a 'cartel' conspiracy, 'so that no government can resist them,'" Juan Orlando Hernandez said in a detention letter to Supreme Court judges before they decided to deport him. However, according to U.S. Secretary of State Antony Blinken, the former Honduran president "committed or facilitated acts of corruption and drug trafficking" and "used the proceeds of illegal activities to (finance) political campaigns."

Hernandez "protected drug traffickers from investigations, avoiding their arrest and extradition," U.S. officials said in exchange for the money received. Several properties, financial assets, businesses, and other 'family-related' assets were confiscated by the judiciary on April 1.