Former President of Honduras faces drug charges in the U.S. 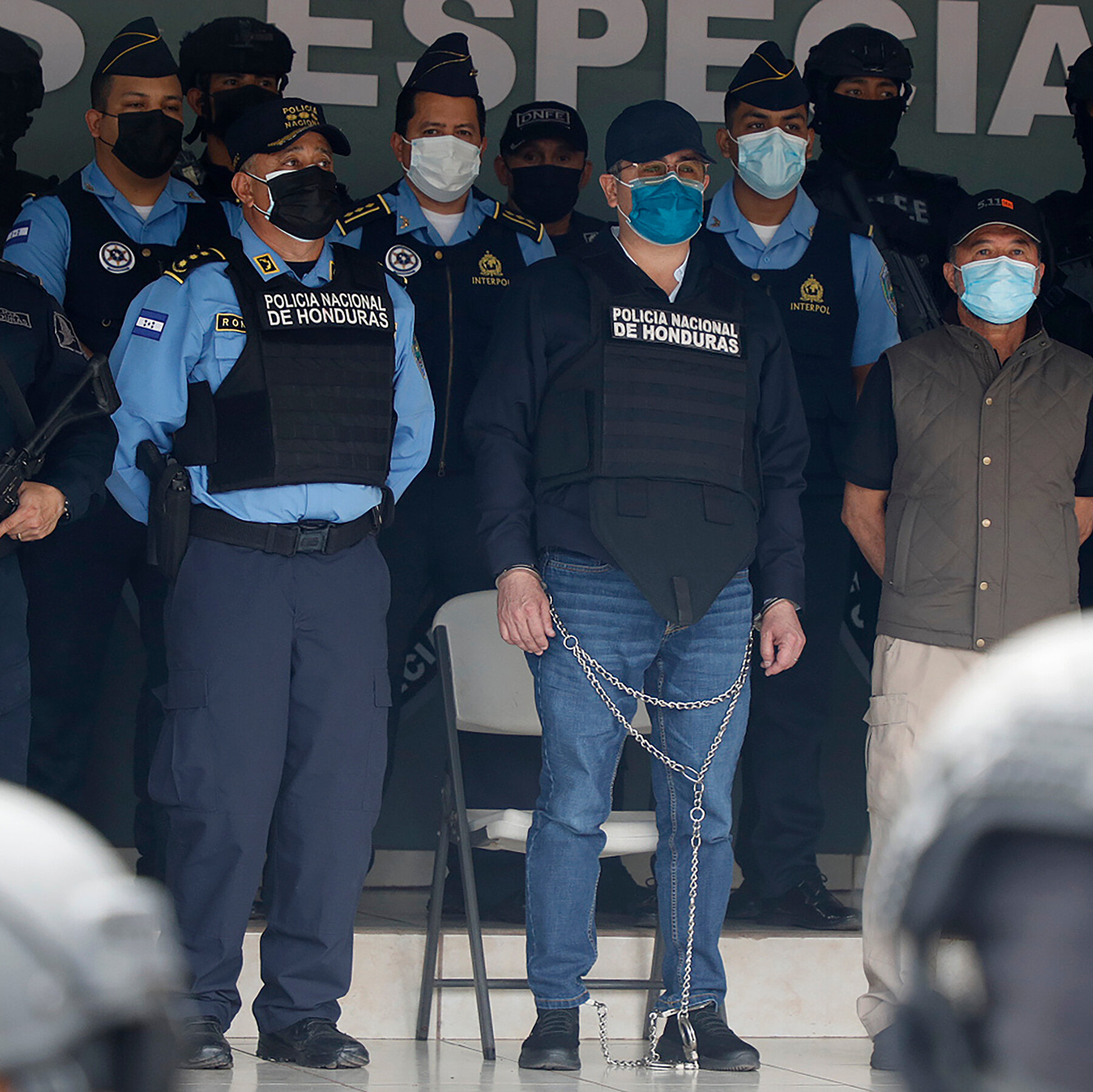 The former President of Honduras Juan Orlando Hernández has been extracted to the United States where he will face drug charges.  The 53 year old served as President from January 2014 to January 2022. Hernandez was arrested at his home a few weeks before his term ended. He faces three charges of, “conspiracy to import a controlled substance into the U.S. using or carrying firearms including machine guns, conspiracy to use or carry firearms.” Hernandez has claimed innocence to all three charges

Hernandez is also being accused of accepting millions of dollars in bribes for protecting drug traffickers coming in and out of the country, including money from Mexican drug lord Joaquin Guzmand also known as “El Chapo.” He will face charges in the South District of New York. According to court documents, Hernandez was involved in, “corrupt and violent drug- trafficking conspiracy to facilitate the importation of tons of cocaine from Venezuela and Columbia then through Honduras and  into the United States.” It is claimed that Hernanadez used millions of dollars to fund his campaigns as well as commit voter fraud in both the 2013 and 2017 elections.

Claiming his innocence, Hernandez appealed to the Honduras Supreme Court, his appeal was rejected by the Supreme Court, which allowed for the U.S. police forces to come detain him from his abode. Honduran Journalists were outside his found witnessing him being put in handcuffs. “I am innocent; I have been and I am being unjustly subjected to prosecution,” claims Hernandez. Retired National Police Commissioner Henry Osorto Canales stated, “This is a start because it has begun with the largest political piece that the country had and logically the rest of the pieces are going to fall, at least those closest (to Hernández),” Although this is not the best look for Honduras as a nation, it will bring justice to what was wrongly done.

Hernandez was arrested along with Tony Hernandez who was allegedly working with his brother in the movement of cocaine into the United States for money. It was not until Tony was caught and arrested when the suspicion got high around Juan being a part of the same crimes. Tony was a previous congressman in Honduras and is now facing life in prison for his contribution. He was charged for almost the same crimes that his brother Juan is now facing who will likely get the same sentencing. U.S. police forces have been building their case for years against Hernandez by gathering information from other drug dealers and politicians that Hernandez had worked with and eventually got all the information they needed to arrest him back in February.

Hernandez took a handcuffed and highly secured helicopter ride from Honduras to New York where his trial is set to begin. Broadcasted live for the world to see, plenty of press as well as Honduran citizens there watching him fly off. Those people were seen celebrating as the plane flew away.

After Hernandez’s term was over in January, he was succeeded by Xiomara Castro who publicly campaigned against Hernandez outing him for his possible contribution to the drug trafficking. People of Honduras realized that their leader was not a good man and voted for Castro to take office. Castro campaigned that he wanted a clean government, one without the President or anyone in office contributing to these crimes. Castro is also now facing heat for appointing government official jobs to her family members. Although this could be a less dangerous path that Hernandez took while being President, it is still evidence of nepotism and conspicuous corruption in the government.

“In exchange Hernández and his co-conspirators helped push 500,000 kilograms of cocaine into the United States – that’s 500 tons of cocaine – a poison that landed in this country, on our streets,” said U.S Attorney for the Southern District of New York. “And as we alleged in the indictment, that’s exactly what Hernandez wanted,” referring to the alleged “gringo” statement. Hernandez also allegedly built a “laboratory” where he held all of the cocaine and had his own armed forces protecting the drugs for him.

"Drug trafficking fuels violent crime and addiction; it devastates families, and it ravages communities," said U.S Attorney General Merrick Garland. "The Justice Department is committed to disrupting the entire ecosystem of drug trafficking networks that harm the American people, no matter how far or how high we must go." The trial for Hernandez will soon begin in New York City. According to U.S. Customs and Border Protection, Honduras is one of the largest countries of citizens who seek asylum on the daily. With a corrupt government and major hurricane disasters, it is reported that more than 200 families per day come to the southern border of the United States to seek asylum.

If Hernandez is convicted of these crimes, he can face up to life in prison. As for now, he still claims his innocence.