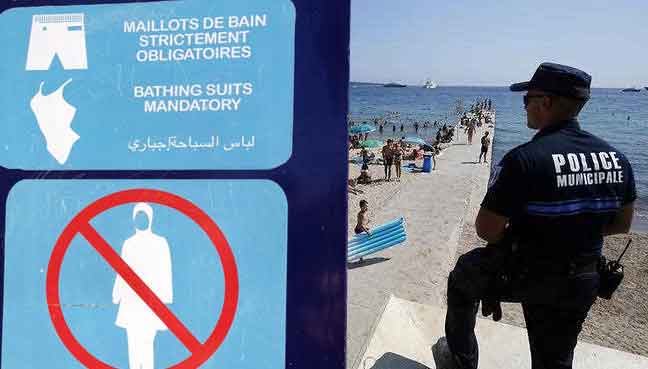 The city of Grenoble in south-eastern France authorized wearing “burkini” swimsuits in state-run swimming pools on May 16, 2022. The decision taken by the votes of the city council was ruled against by the top administrative court of France on June 21, 2022.

The all-in-one swimsuit, used mainly by Muslim women to cover their whole bodies and hair while bathing in public places per their beliefs, has been a topic of political debate in France in recent years. The top administrative court argues that such an authorization violates the principle of official government neutrality on matters of religion.

The burkini, as well as baggy swimming trunks for men, are prohibited in most state-run pools for hygiene reasons, and these strict swimwear rules oblige everyone to wear tight-fitting and less-covering swimwear. The decision of Grenoble aimed to allow everyone to dress how they wanted in these public spaces, which meant men would be able to wear long shorts and women could also bathe topless in the city’s pools.

Grenoble’s mayor, Eric Piolle, has been supporting the new measure, which women from Alliance Citoyenne brought up through the 2,600 signatures they gathered on their petition. The women argue that not letting women wear what they want is as oppressive as forcing women to wear the veil, and they believe both are the manifestations of oppressors who wish to impose restrictions on women.

While the mayor agreed with the petition, promoting the right for everyone to dress how they want in public spaces, there was a lot of backlash towards the decision. He was accused of doing deals with political Islam to get votes and also of harming the Republican values of France.

At first, the prefect for the Grenoble region, the top government official, blocked the decision, arguing that it violated France’s principle of secularism. La laïcité, or secularism, for France, means that any religious affiliation must remain a private affair and should not be displayed in the public sphere.

Following the prefect of Grenoble, the Council of State upheld the ban on burkinis and stated that the decision of the city council of Grenoble was made to satisfy a religious demand, and it disrupts the neutrality of public services.

The United Nations (UN) has been calling for France to lift the ban on burkinis since 2016. The spokesperson of the UN High Commissioner for Human Rights, Rupert Colville, said that “These decrees do not improve the security situation but rather fuel religious intolerance and the stigmatization of Muslims in France, especially women".

According to Colville, the humiliating and degrading attitude toward certain groups regarding dress codes especially affect the autonomy of women and girls to have their independent decisions of self-expression and is a form of discrimination.