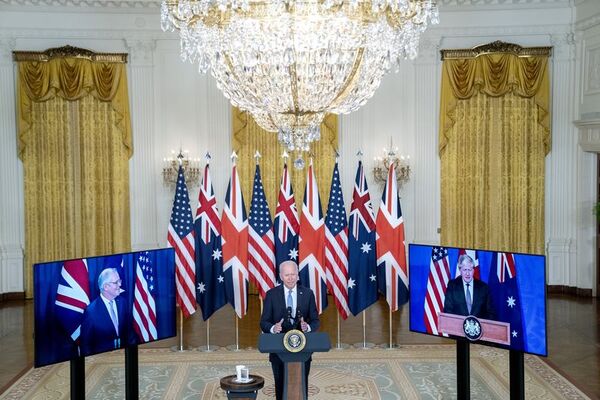 The French government has recalled its ambassadors to the US and Australia with immediate effect. The unusual diplomatic retaliation against France's allies occurred two days after Australia announced the cancellation of a significant deal of French conventional submarines in favour of US nuclear-powered subs. The French minister for Europe and international affairs, Jean-Yves Le Drian, said in a press statement on Friday that the decision was taken at the behest of President Emmanuel Macron.

On Wednesday, US President Joe Biden revealed a new deal between the US, the United Kingdom, and Australia, which includes a long-term commitment to developing nuclear-powered submarines for Australia. Mr Le Drian termed this move by their allies as a “stab in the back.” The French foreign minister cited the "extraordinary severity of the declarations" in justifying France's move to recall its ambassador to the United States, Philippe Etienne. He also confirmed that France will recall its diplomat to Canberra, Jean-Pierre Thebault.

The initiative to equip Australia with nuclear-powered submarines is part of "AUKUS," a new trilateral alliance between the US, Australia, and the United Kingdom. France is expected to lose the equivalent of $65 billion US dollars from an existing contract to supply conventional, diesel-powered submarines to Australia. The terminated agreement with France, a significant global arms exporter, is likely to have substantial economic consequences on the French defence sector. France also risks losing geopolitical ground in the Indo-Pacific, where it has major stakes.

France claims it was not given sufficient warning before cancelling the deal. However, Australian Prime Minister Scott Morrison said that in June, he notified Mr Macron that the arrangement was in jeopardy due to setbacks and economic difficulties.

Since the pact's unveiling, the heated diplomatic conflict has erupted significantly, with France scrapping a gala intended to take place at its Washington embassy to commemorate the US-French alliance. US Secretary of State Antony Blinken stated on Thursday, ostensibly to defuse tensions, "We collaborate very closely with France on many common goals in the Indo-Pacific, but also across the world." We want to keep doing so. We place a high emphasis on that relationship and alliance.” Australia has expressed disappointment at France's move to withdraw its envoy. “We deplore France's move to recall its ambassador to Australia,” a foreign ministry official said in a statement. “Australia places a high priority on its relationship with France. We look forward to engaging with France on our many topics of mutual interest and shared goals.” According to a top government official, key American policymakers discussed the new deal with their French counterparts both before and after it was made public.

In a press briefing on Thursday, Australia's Minister Of defence Peter Dutton stated that the move to pick the American nuclear-powered submarine over France's standard diesel submarine was made "in the best interests of our domestic security." Biden's attempt to thread the needle of European diplomacy and negotiate a post-Brexit world has some committed partners accusing him of ignoring their interests or aligning with those of his pro-nationalist antecedent, former President Donald Trump. Before withdrawing the French Diplomat, Le Drian lashed out at the US, stating, "This harsh and unilateral action mirrors a lot of what Trump is doing."

Meanwhile, Beijing branded the new coalition an "utterly imprudent" hazard to regional stability, calling Australia's adherence to nuclear non-proliferation into doubt and warning Western partners that they risk "shooting themselves in the foot." In an interview with radio station 2GB on Friday, Australian Prime Minister Scott Morrison said that China has its own "fairly substantial project of nuclear submarine development."

China claims nearly the whole resource-rich South China Sea, through which billions of dollars in yearly maritime trade traverses, rejecting opposing claims from Brunei, Malaysia, the Philippines, Taiwan, and Vietnam. Beijing has been accused of amassing a variety of military weapons, including anti-ship missiles and surface-to-air missiles, ignoring a 2016 international tribunal verdict that ruled Beijing's rightful claim to most of the territory to be invalid.

For some years, France has advocated for a European policy to strengthen economic, political, and military connections in the area, which stretches from India and China to Japan and New Zealand. The EU announced its Indo-Pacific strategy on Thursday. The AUKUS headlines, however, eclipsed the EU's Indo-Pacific policy, which aims to "explore measures to secure greater naval deployments by the EU Member States to assist defend maritime lines of communication and freedom of navigation," according to a statement.

It's unclear how the discourse went down with all of the entities involved. According to the US Secretary of State Antony Blinken, high-level US officials discussed the Australian collaboration with their French colleagues before its public announcement. Officials in the United Kingdom and the United States have stated that it is up to Australia to issue a warning to France.

For its part, Australia defended the termination of the French contract by citing the country's intrinsic need for nuclear-powered submarines instead of diesel submarines in an evolving security environment as China strengthens its military might in the Indo-Pacific zone. In a nutshell, it wasn't personal.

The French, however, have a different perspective, as seen by their reply.