Geo-economics- Another facet of Globalisation 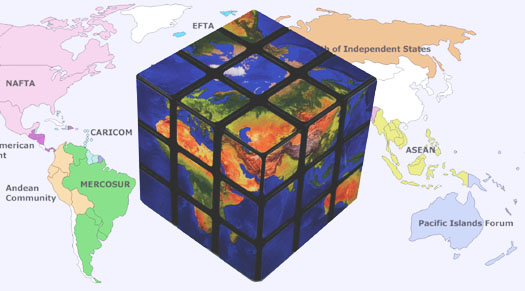 “In this constantly changing world, nothing changes more than geography” - P.S Buck

With the influx of globalization and multilateral cooperation amongst States, politics has had a transformed notion. It was just an internal phenomenon, but the one changing with geographies. Geopolitics is an ancient concept, where the kings and ambassadors opted for policies better suited for their national interest and seeking cooperation and coordination in terms of peace treaties, charters for trade and business, and aid in terms of conquests and warfares.

Different kingdoms, owing to their natural terrain and abundant resources were approached and taken advantage of differently. Only with the onset of better diplomatic missions and structured systems of embassies, and consulates has been the world geopolitics, and highlighted in the context of dynamic international relations. The reflections of geoeconomics can also be seen in the words of Thucydides, “The war will not be decided in Attica, as some people think, but at the locations where Attica pulls out its resources.”

Geoeconomics is a branch of study or a context under the broader theme of politics, predated to the post-Cold War era but solidified over a few years. Luttwark first coined the term “geoeconomics” in his 1990 essay “From Geopolitics to Geoeconomics”. It is defined as the study of the relation of international economies, geographies, and politics placed in the “infinite core” rising from within the center of the earth, extending till the outer space, as the Azerbaijani economist Vusal Gasimli puts it.

the increased influence of Chinese economic strategies in the global market, a resurgence of state capitalism and state-owned enterprises, and greater interlinking of the world economies through globalization has made it all the more necessary to have powerful geoeconomics at disposal.

With the loss of international fear, of inter-country military threats, and the increased use of soft power and economic diplomacy, economic strategies and situations have become more visible and dominant in parameters such as superiority and power display. Be it China’s “Belt and Road initiative” or the “21st century Silk Route” alongside the “16+1” format or State’s National Security Strategy; all stem out of geoeconomic perspectives to highlight the economic supremacy and put economic dominance as a central prerequisite to power. The driving force of geoeconomics relations is both endogenous and external sector; economic drivers are endogenous while politics, culture, and geography are external factors (Sustainability 2017, 9, 2363 ).

One aspect that needs to be understood while studying geopolitics is that it presupposes the presence of ‘international antagonisms’ spaced about multi-disciplinary fields. Economic strength is one of them and puts differently, the main root of geoeconomics, whereas geoeconomics, stems from the supposition that dominance, power, and security are not just to be confined to physical control over a territory which is the case in classical geopolitical theory. Barton (1999) marks these two concepts into eras and characterizes these eras through the structure of states and degree of liberty in trade and economic cohesion among nation-states.

He characterizes the geopolitical era as the one with ‘hegemonic state and stability in international relations while the geoeconomic era is the one with ‘highly flexion-state state actors and borderless transnational relations’. The skewed, asymmetrical, and highly dynamic dependencies in the contemporary contexts make economic power a ‘potent’ means to wield and establish power and pursue strategic agendas. I by no means am arguing that the economics leverage could eclipse military-based power dynamics, nor do I deny that it creates an edge in power politics.

In a more recent scenario, the novel Coronavirus has made health security and a robust public health system the cue determinant of soft power superiority. With restricted travel and slow down of the global economy, nuking the implications of this pandemic will be an essential parameter to open corridors for trade and investment. The economies like India will seek answers within. National spaces become the primary market with the ultimate focus on domestic demand and local businesses.

It is being predicted and argued that global trade channels will witness a complete overhaul, and the nations might have to reconsider bilateral trade agreements. The greatest fallout will be World Trade Organisation’s credibility and steer pressure, for how the global trade will look like, post-pandemic. There has been an evidential and exponential growth in ‘domestic’ sentiment, which might hurl global trade and slim any plausible progressive global trade outlook.

From Geopolitics to Geoeconomics: Logic of Conflict, Grammar, and Commerce by Edward Luttwak

Theory and Practice of Geoeconomics by Edwar Luttwak

Dialectical Prerequisites on Geopolitics and Geoeconomics in Globalization's Restructuration Era