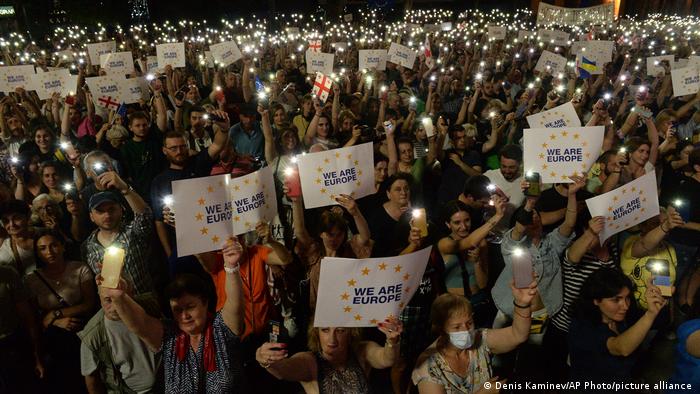 Georgians are protesting against the EU's decision to not grant candidate status to the country. Photo: Denis Kaminev/AP Photo/picture alliance.

On June 17th, the President of the European Commission, Ursula von der Leyen, released a statement concerning the membership of Ukraine, Moldova, and Georgia in the EU. The President, after collecting the opinion of the Commission on the progress made recently by the three countries, suggested that Ukraine and Moldova be granted the perspective to become a member of the European Union first and, successively, candidate status. Georgia would, instead, be granted only the perspective of becoming a member but not candidate status as the necessary political and economic criteria are still to be met.

In comparing the three countries, the President stressed that Ukraine and Moldova have taken substantial steps to demonstrate their aspiration to be part of the European family. Their actions include new laws that regulate the judicial system, the rule of law, and anti-corruption policies. Nevertheless, the President stressed that the countries still have a long road ahead of them to meet the requirements.

Accordingly, new reforms will be required. In the case of Ukraine, for instance, further steps need to be taken to regulate the condition of minorities with dedicated laws. As for Moldova, the country needs to improve its economy and public administration sectors. According to the EU assessment, Georgia, despite its market-oriented economy and strong private sector, lags considerably behind. The nation must unite politically to elaborate and implement a unitary plan toward structural changes that will ultimately lead to the European Union. This plan should explicitly lay out the required reforms to reduce the political polarization in the country.

A strong political consensus is, therefore, the sine qua non for the country to follow the required path toward the EU. Also, the lack of laws aimed at the inclusion of civil society, a stronger judicial system, and a free and pluralistic media environment are still problems. Consequently, the Caucasian country was granted only a European perspective. Consequently, the Caucasian country was granted only the European perspective.

This decision was not met with joy by many Georgians. Many reversed in the streets to express their disappointment while stressing their desire to be a part of the European family and not of Russia. On Monday night, at least 60,000 people demonstrated in Tbilisi, the capital of Georgia. The event was sponsored by opposition parties and coordinated by the Shame Movement, a pro-democracy action group. The organizers claimed that Georgia's constitutionally mandated choice to apply for EU membership embodies the aspirations of many generations of Georgians.

The Georgian Prime Minister, Irakli Garibashvili, although he defined the EU Commission’s decision to recommend the European Council to grant Georgia a European perspective as “historic”, did not hide his disappointment either.  He pointed out that the EU Commission has adopted a different strategy in Georgia. While granting EU membership to Ukraine and Moldova worked as an incentive for the two countries to meet the requirements as soon as possible, in Georgia, the EU adopted the opposite approach.

Furthermore, he explained to his citizens that Ukraine was granted candidate status because of the war. Furthermore, he emphasized that Georgia has been an unwavering leader for both the EU and NATO over the years. In doing so, he reminded everyone of Georgia’s contribution to the Euro-Atlantic ideal. Accordingly, the country was actively engaged in the fight against international terrorism and also sent troops for several peace-keeping missions, like in Iraq, Afghanistan, Kosovo, and the Central African Republic.

Nevertheless, the EU Commission has a point. Georgia needs a stricter approach to the oligarchs’ rule in the country. It is well-known the role of Bidzina Ivanishvili, Georgia’s richest man. The oligarch, after making his fortune in Russia in the metals and banking sectors, cashed out everything in 2003 and returned to Georgia, where he engaged in politics. He was elected prime minister in 2012. As Deutsche Welle reported, many Georgians acknowledge this problem and understand the need for a radical regime change through a de-oligarchization process. Not coincidentally, some demonstrators were protesting against the oligarch regime in Georgia and the fact that people like Ivanishvili are in command of the country.

The EU Commission decision was defined as historic and symbolic as membership of countries like Ukraine was deemed impossible before the Russian invasion on February 24th.  The next step will be the upcoming EU summit that will be held between June 23rd and 24th in Brussels, where the fate of the three countries will be decided. The EU Commission statements must be approved by the leaders of all 27 EU states. According to all indications, the suggestions made by the European Commission last week are expected to be approved by the EU leaders. As a result, both Ukraine and Moldova are expected to be granted candidate status on June 23rd in the evening.