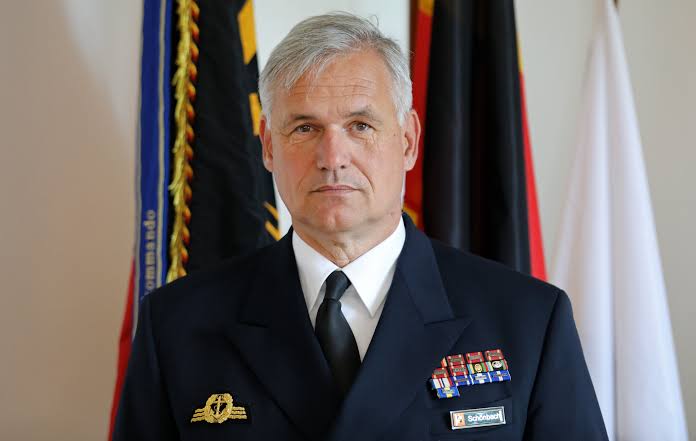 German Vice Admiral Kay Achim Schonbach was delivering a talk at the Manohar Parrikar Institute for Defence Studies and Analyses. Some of his remarks at the event did not go down well. He touched upon various topics like Germany's new foreign policy highlights, under a new chancellor, volatile global security situation, but primarily upon Germany's interests in the Indo-Pacific region in the context of an assertive and belligerent China. However, it was his comments on Putin and Crimea that stirred the controversy.

His analysis was that Putin was looking for respect from the west and that not only should he be given respect but that he probably deserved it. He said that giving some amount of respect will not cost anyone anything. He also said that Russia is an old and important country and it can prove to be important against China. These remarks came in the backdrop of heightened tensions between Russia and the West on Ukraine with signs of Russia preparing for a military assault on the former Soviet republic. The Navy Chief said that Putin’s intentions are probably to divide Europe. He also admitted that Crimea is lost to Russia and that Kyiv won’t be able to recover it. Russia annexed the Crimean Peninsula in 2014. Such a statement is in direct contradiction of the official position of the West and USA, that annexation of the Crimean Peninsula is unacceptable, illegal, and must be reversed.

The German Government immediately distanced itself from these statements with a German Defence Ministry Spokesman saying the Federal Ministry of Defence wasn’t associated with the content and the choice of the statements.

Schonbach issued a clarification on Twitter stating that it was a mistake. He stated that the remarks were his own opinion and did not represent the official views or position of the Defence Ministry. He also said that he had asked the German Defence Minister to relieve him of his duties with immediate effect which the latter accepted.

The comments particularly did not go down well with the Ukrainians who stressed “the categorical unacceptability” of the comments and urged the German Government to reject the Navy Chief's comments on Crimea saying that such statements undermine the efforts to counter Russian aggression.

The Ukrainian Foreign Minister, Dmytro Kuleba tweeted that while Ukraine is grateful to Germany for the support that Germany has lent to the country since 2014 as well as its diplomatic efforts in resolving the Russian-Ukrainian Conflict, such statements are disappointing and run counter to that support and efforts.

At the think-tank at New Delhi, his talks also touched upon issues of geostrategic issues of the Indo-Pacific where he stressed upon Germany's support for a rules-based international order being threatened by China and freedom of Navigation. He also invoked the need for India and Germany – two democracies – to better understand each other to reach a common ground and engage more deeply in the military sphere by exploring more avenues to strengthen naval cooperation and enhance strategic engagement. He also criticized China for giving money to dictators, killers, criminals as long as they received resources from them.