How an international student escaped the Ukrainian warzone 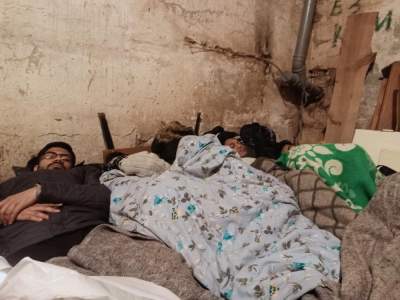 This article is based on a conversation with an international student who fled Ukraine during the Russian invasion. The person asked not to be identified for privacy reasons.

That is how the morning for people in Ukraine started on the 24th of February.  That is also how the escape story of this international student begins who was situated in Kyiv. The students were told that it was a border conflict. The prior advisory meeting that was held on February 15th by the Indian embassy in Ukraine informed the students that all non-essential people should consider leaving Ukraine. The issue with that statement is that students are essential people. Despite these miscalculations, students started booking tickets to get home. This student scheduled the flight on the 19th of February for the 26th while still attending classes because the school year continued despite the constant attacks. Classes were shifted to the online format even with professors constantly being in the streets and treating wounded soldiers and civilians.

The reaction of the citizens of Ukraine after the attacks was to rush to the nearby ATMs to withdraw as much cash as they could, while quickly stocking up on necessary food items. Shortly after, the focus of the population was to look for and hide in bunkers. If bunkers were unavailable, the next option would be to look for shelter houses that were in close proximity. The citizens that were coming in from other states of Ukraine were residing in metro stations that were quickly filling up.

Fortunately for the students, their building has a bunker that is easily accessible. Being on the 9th floor of the building, the student had to rush to the basement of the building where the bunker is, every time the siren would sound off. The sirens indicate the possibility of air raids. Due to having stuff leftover in the room, the student would have to continuously run back and forth between the 9th floor and the bunker throughout the day while not being able to utilize the non-functioning elevator. The bunker was described as a compact, underground chamber encircled by dusty pipes and Soviet-era electric cables. It housed over 900 to 1000 students in a claustrophobic area where students would use doors, beddings, pillows, jackets, or similar items to make sleep manageable. Students communicated with the Indian embassy in Ukraine ending up not receiving any assistance from the official other than acting as a part-time news outlet.

On the 26th of February, Kyiv implemented Martial Law which was followed by a city-wide curfew that prevented anybody from leaving their shelters. During this span, students were bravely packing their bags in case the restrictions would be lifted. Surviving in the bunker, students were trying to call their families so that they would urge officials in India to take necessary action in this escape plan, but the attempts of asking for help were unsuccessful.

On February 28th at 8:00 am, the curfew was lifted which prompted the students to permanently leave their bunker in the pursuit of catching a train that would lead them to the closest Western border. Walking to the central railway station, students would be frightened by the emphatic sounds of sirens and police cars they encountered along the way. Having arrived at the railway station on foot, the greatest struggle was to board one of the trains in the sea of wagons that would randomly depart and arrive on unplanned platforms. Ukrainian women, children, older citizens, and pets were the demographics expected to board the trains because the crowd of terrified people didn’t expect the addition of international students. Now the combination of Ukrainians and foreign undergraduates were pushing each other in hopes of securing a spot on these life-saving coaches. It was a collective stampede of hysterical bodies trying to squeeze into a traveling box whose capacity was determined by security guards. The student’s friend had a gun pointed at his head by the security guard who was pushing him from the railcar only because he was an international student. The student group moved from wanting to board a train that leads to Lviv, towards finding a train that was scheduled to go to Uzgurud, the city close to the Slovakian border. The 53-member group tried to push the crowd and themselves in the wagon but they were denied entry. The guards removed the ledge so that nobody else would board. Miraculously, the senior, international student jumped over into the moving train but was quickly removed by the guard who was repeatedly smashing his head of the train walls. The other 52 students had to board the next train by facing the same difficulties while getting in amongst the crowd. The wagon was congested with passengers who were finally going to arrive at Uzgurud.

This was followed by walking from Uzhhorod to the Slovakian border. The 10 km walk included being segregated into groups of 4 by the Ukrainian military and passing at least 4 checkpoints where their passports were being checked. The 4-hour walk proved to be a much easier challenge than boarding a train in Kyiv.

The students crossed the Slovakian border and were finally welcomed by the officials of the Indian embassy in Slovakia who provided buses and fully arranged their food and accommodation. Indian students who were studying in Slovakia were volunteering and coordinating with officials so that the reception would be successful and the students would be informed about the next steps. The student and the rest of the group were taken by bus to northern Slovakia where they stayed for 2 days. The particular student group was placed in a recreation center while other groups were placed in motels or Slovakian host families.

Being in the outskirts of Slovakia, gave students some space to recover after a grueling mental and physical experience in Kyiv. The volunteer informed the group on the 3rd day that they have to leave the recreation center and head to the Kosice International Airport where they would be given flight tickets. The bus took the student to the airport where they boarded a flight to Delhi.

Upon arrival to Delhi, the student group was hosted by Indian officials who instructed the group to smile and happily wave at the cameras as if the government actions were the reason why these undergraduates successfully fled the warzone. The source also disclosed that the group of students that escaped to Hungary and flew back to India was also greeted by the officials of the Indian government who directed the frightened bunch to smile at the cameras and to loudly chant “Praise Modi.”

The invasion is deservedly capturing the attention of the world. After all, Ukraine is being attacked by a powerhouse nation that is consistently targeting civilians and their infrastructure. These are valid reasons why the focus is shifted on the big geopolitical clash which has the whole world paralyzed. The undergraduate who shared this story had to survive in the bunker in Kyiv, walk to the central railway station, board the train which proved to be the most daunting task knowing how security guards were treating non-Ukrainians upon arrival, walk 10 kilometers to the border while passing through checkpoints to finally reach Slovakia.

This improvised voyage was performed without any help of Indian officials who finally stepped into the picture after the students reached Slovakia. This mistreatment and blemish could have been avoided if the Indian government would’ve issued earlier warnings to its citizens, something that the U.K. and South Korea performed two weeks prior while saving their citizens who were able to escape by booking and flying on commercial flights before the war began.