How HeroRATs Are Impacting Lives 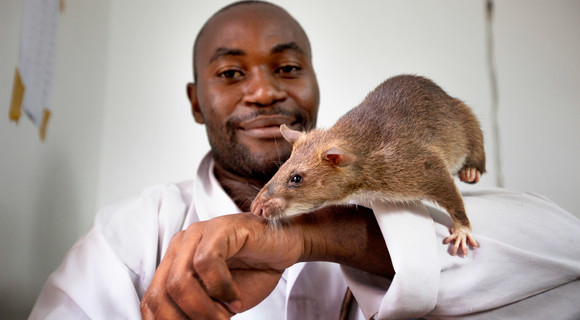 Rats may be one of the more highly disliked creatures in the animal kingdom, but they actually might be prove to be more useful than anyone suspected. Specifically when it comes to the African giant pouched rat, non-profit organization APOPO has found an extremely important use for them. The organization has actually been training the rats to detect both landmines and tuberculosis.

The acronym APOPO stands for the Dutch phrase "Anti-Persoonsmijnen Ontmijnende Product Ontwikkeling", which translates to Anti-Personnel Landmines Detection Product Development. APOPO’s mission is to “protect people and the planet with innovative solutions using trained rats and other scent detection animals.”

The African giant pouched rats that are trained by APOPO have been dubbed “HeroRATs.” This particular species was chosen because they have a very developed sense of smell, similar to that of a dog. Additionally, they are intelligent and therefore trainable, not heavy enough to set off landmines and are cheap to maintain.

More than fifty countries in the world have landmine contamination. Over three thousand people across the world die every year because of landmines, 80% of which are civilians. Remarkably, it would only take a HeroRAT thirty minutes to search an area the size of a tennis court for landmines when it would take a person with a metal detector up to four days. Part of the reason the land mine detection rats are able to work so quickly is because they ignore scrap metal that would delay metal detectors and only search for an explosive smell. APOPO is currently working to remove landmines in Cambodia, Angola, Zimbabwe and Mozambique.

A mine detection HeroRAT can take nine months to train. They are taught to associate the sound of a click from a human automated clicker with a food reward. They are eventually taught to distinguish between the smells of positive and negative TNT. Then the rats will only hear a click and receive a treat if they interact with a sample of positive TNT. Rats will undergo field training with real deactivated landmines and then be subject to a blind test where only a computer knows where the landmines are before they are allowed to become HeroRATs.

APOPO’s work with scent detection for tuberculosis is also incredibly important as TB is an extremely infectious and deadly disease that still affects all too many countries. In fact, tuberculosis currently causes the most deaths of any infectious disease, with approximately 1.4 million people dying of the disease every year.

For plenty of developing countries, the standard method of diagnosing TB is a smear microscopy. However, the smear microscopy is at best only 60% accurate. Therefore, TB is generally underdiagnosed in countries where it is active. But because of HeroRATs speedy process and powerful sense of smell, they are able to increase the detection of TB.

Any sample that is alerted by a HeroRAT is rechecked using WHO endorsed methods.

APOPO is doing wonderful work and has already made significant impact in the communities that they work in.

An interesting way to support APOPO is actually to adopt one of the HeroRats. “Adopt” is a technical term. Of course, the rat stays in the field. But for nine dollar a month, you can symbolically adopt an individual HeroRAT that you will receive monthly updates about as well as an official adoption certificate with your name on it.

Additionally, you can always make a traditional donation to APOPO.

To adopt a HeroRAT, donate or learn more about the HeroRATS, you can visit https://www.apopo.org/en.