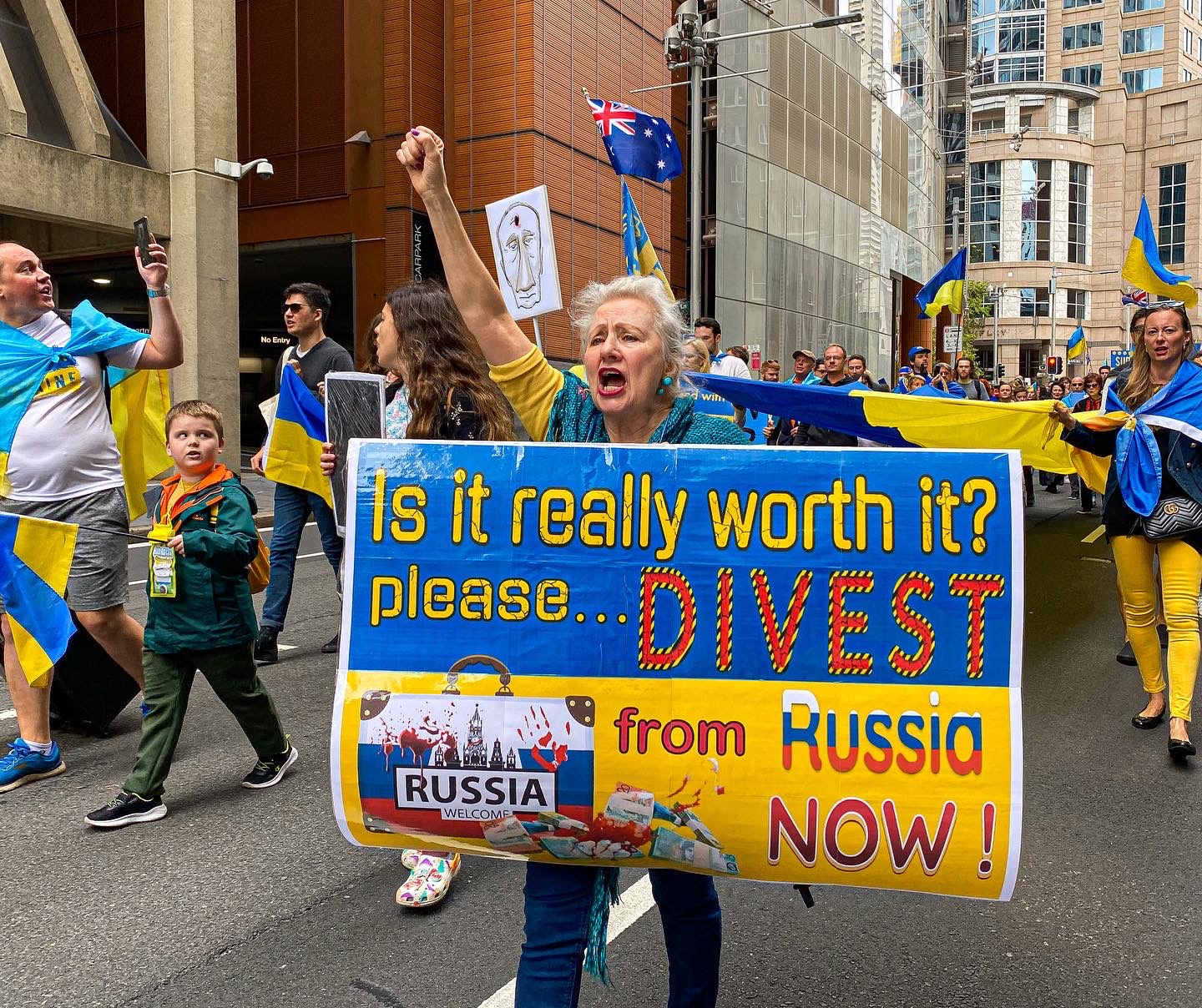 Hundreds of Ukrainians and supporters marched from Martin Plane to Sydney Opera House on Saturday (02) afternoon. They demand the termination of the activities of companies such as Pepsi and Nestle in Russia, as well as an increased support from international communities to fight what they call ‘an economic war’ as the invasion completed its 38th day.

Since the first day of the war, Anton Bogdanovych, a computer science university professor, has been organizing a weekly rally in Sydney's City Centre to make demands in response to the invasion of Ukraine. Mr.Bogdanovych affirms that now he has to fight an economic war. 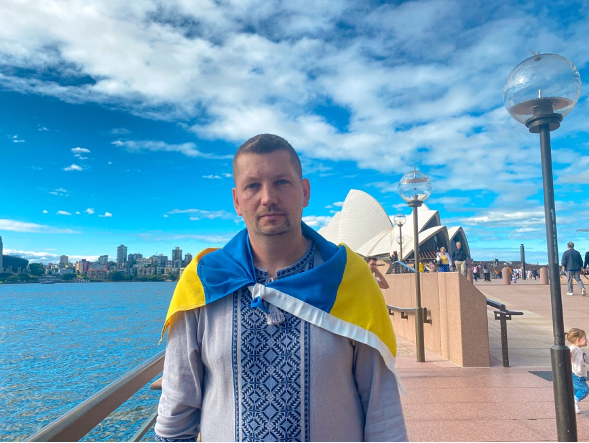 “Our main mission here is to push for Russian economy to collapse,” he said.

The professor had just taken a 6-month recess from his work shortly before the Russian invasion happened. With time he could never have imagined would be so valuable, he decided to build a structure to fight from overseas.

“It is a big group of volunteers, including even lawyers, who are pushing for legislation.

After several protests, including some in front of companies’ headquarters, Mr. Bogdanovych was finally contacted by Pepsi and Nestle. He revealed that their negotiation tactic is bringing the personal aspect to the conversation. 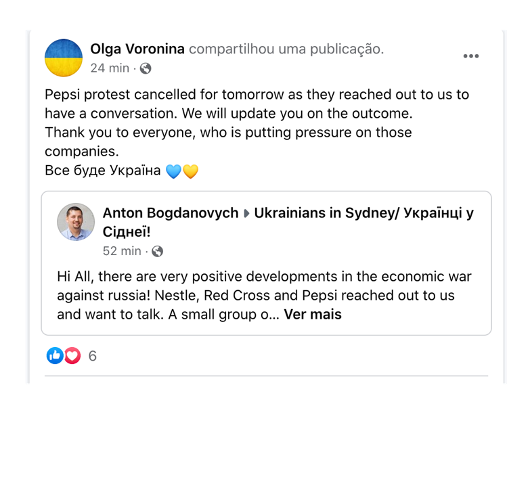 “It is the mission of my life wining this war,

“I make it clear that I will keep fighting no matter what they say. Almost every meeting actually ends up in emotional tears for them.”

From abroad, the Ukrainian’s strategy is to always work in horizontal structures around the world.

“We are all connected, we have a horizontal network where every person, if the idea is good enough, can deliver it anywhere in the world.

“It is something that is programmed in our heads, if our country is in danger, we have to gather in the main square of the city where we live, and this is how we quickly build these horizontal structures.”

The Professor also commented on the recent video appearance of President Volodymyr Zelensky in the Australian parliament and Prime Minister Scott Morrison's quick response in sending 25 million in weapons to Ukraine.

“It was extremely pleasing for me to see last week how president Zelensky gave his speech in the Australian parliament.

“Australian politicians calling him (Zelensky) the lion of democracy, and immediately the day after, the prime minister, without any hesitation said, ‘yes, we will deliver it’ (weapons), because Australia Stands with Ukraine.”

Katherine Argyrou, a speaker at the protest and a member of the Australian Federation of Ukrainian Organization, reminded the Ukrainians about the importance of people telling their personal stories as a strategy to get attention of the mass media. 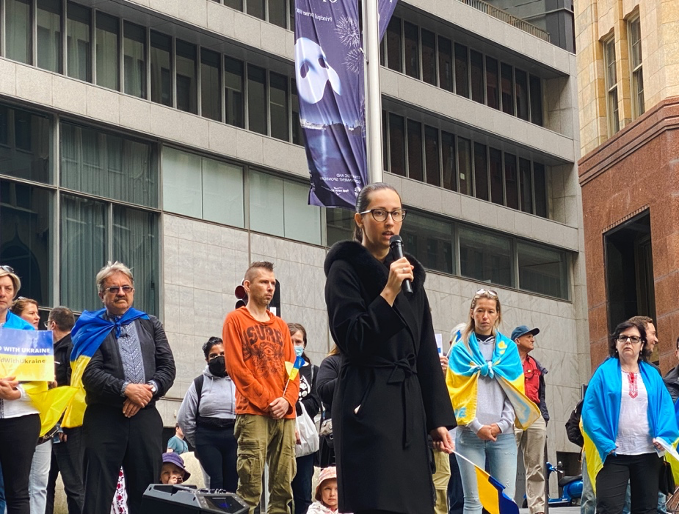 “They want a personal factor, so I urge you to continue spreading these stories, talk about uncomfortable facts,” she said.

“Australians need to know why we stand here every single week.”

Ms.Argyrou highlighted the importance of getting different communities to embrace the cause.

“This is important to get things passed through government. That are not only Ukrainians wanting something, but the broader community stands behind it.” 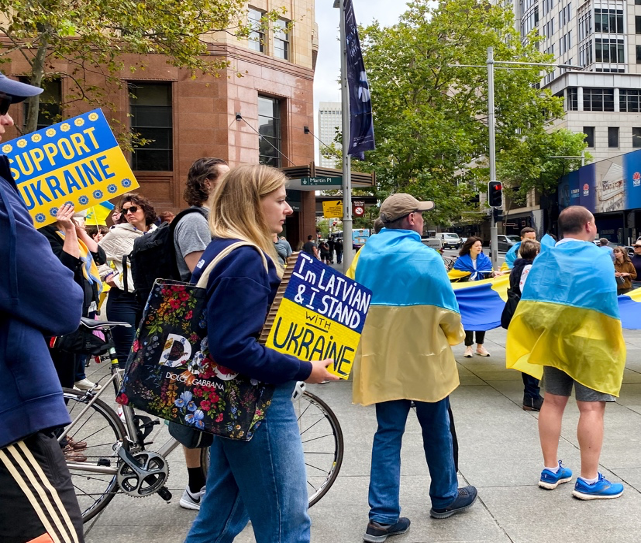 The rally was attended by people of various nationalities. Still, most of the crowd were Ukrainians living in constant worry as they had to leave their relatives behind.

Maryna Zeider, a Ukrainian woman who lives in Sydney, said that her parents are still living in terror in Ukraine’s capital.

“They do not have the energy to leave Kyiv,” she claimed.

While some cannot afford to leave their homes, others stay to join the fight in loco. This is the case of Tetiana Pyshna's husband, who stayed as a volunteer in Ukraine after his wife and his 12-year-old daughter, Anastasiia Pyshna, left Kremenchuk three weeks ago.

The mother and daughter came to Australia to encounter Tetiana’s sister Yulliia and her Australian brother-in-law, Matthew Girvan. He described the two girls’ journey to Oceania as an arduous mission. 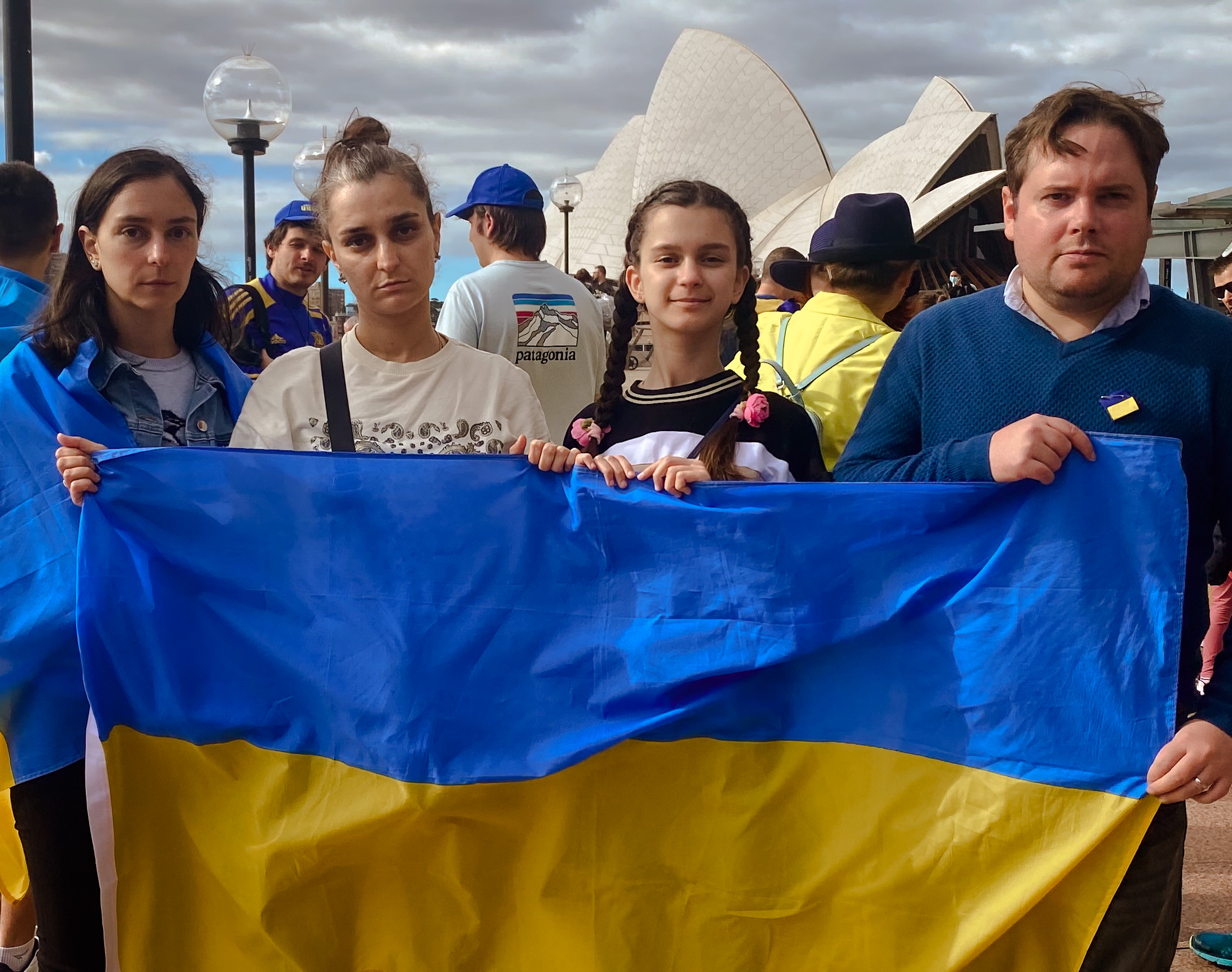 “There were petrol shortages, they did not have a car, they managed through their church group to have a bus,” he said.

“It was 28 hours from Kremenchug to the Romanian border. Then, they stayed in Romanian for a few days and then they got a flight to Australia.”

However, the four members of the family in Australia agreed on the reasons why the husband stayed in the conflict zone.

“They need people who are going to fight or volunteer, men, he is not able to leave Ukraine by law and this is absolutely normal,” Yuliia said.

The willingness to fight on the ground for the country defines the nation.

“Soccer players are fighting, many musicians; all celebrities are coming back,” said Mr. Bogdanovych.

Mr. Bogdanovych affirmed that he has to constantly convince himself that he will be helping his country better from Australia than on the battlefield.

“I’m just trying to calm myself down that I am more productive being here putting all my time fighting this economic war.”