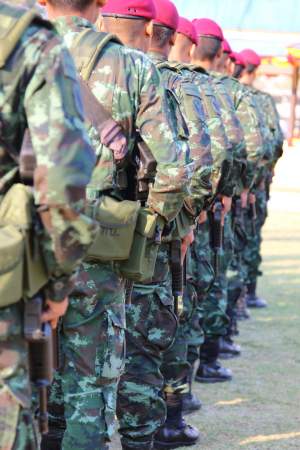 The annual parade of the military corps of the Alpini, specialized mountain troops of the Italian Army, showed widespread sexual harassment against women. The march drew hundreds of thousands of spectators and an estimated 75,000 veterans and active members of the Alpini division between May 5 and May 8 in Rimini.

According to activist groups, many women, many of whom were working in bars and restaurants, reported being verbally abused, catcalled, and groped during the event. "In a ten-minute walk with my dog, they stopped me four times, touched me, and chased me twice." Another Vic "im writes, "While I was cycling, they tried to let me into a shed, so I pedaled as fast as I could." A woman walking with her children was repeatedly invited to have sex. A girl claims she was slapped, and racist insults were directed at her friend who attempted to defend her (from Il Manifesto).

On Tuesday, the Minister of Defense Lorenzo Guerini called for a thorough investigation into the widespread sexual harassment and the Alipini's role. He stated: that "these episodes" will undoubtedly have to be investigated by the competent authorities. The testimonies vary in shape and form, but they all have one thing in common: the attitudes and behaviors that women were subjected to are all symptoms of structural gendered violence. There must be zero tolerance. Harassment and violence must never, under any circumstances, be justified and must be condemned without hesitation" (from La Rep" blica).

The Alpini are the world's oldest world's active mountain regiment, established in 1872 to protect Italy's northeItaly'sers. The black feather pinned to their green hats easily distinguishes the soldiers. The Alpini National Association, which organizes the annual event, condemned "reported uncivilized behavior" but said there had to be expected at events that draw such large crowds. However, these are not instances of "bad manners" "or drunkenness; they are examples of alleged harassment based on gendered narratives and ideologies.

As noted by the activist group NonUnaDiMeno and most women who reported the abuses, the issue is being able to file a complaint against strangers. Not to mention that most testimonies stated that the police were present and did not intervene. "When we report" serious violence, we are given little credibility, let alone harassment that society does not consider necessary," an activist" from the feminist group stated.

Elly Schlein, vice president of the Emilia Romagna region, insisted that asking only for complaints before discussing the issue is shortsighted: "In a country with such a deeply rooted patriarchal culture, reports must be taken very seriously," she wrote on "Facebook. "There is no n "ed to wait for formal complaints - which are frequently not made out of fear of being believed or taken seriously - to intervene both at a regulatory and cultural level."

The drama in this situation lies in the widespread belief that harassment results from simple inappropriate behavior or incivility. There is the notion that it is natural for this to happen and women to experience it. There is also the blaming of those who do not report precisely because of the victims' lack of support and assistance. Italy is supposedly founded on a whole gender equality system; however, there is a strong need to improve this and unequivocally condemn the subculture of male prevarication against females.