If EV’s are the future, does Tesla have what it takes to beat the Germans? 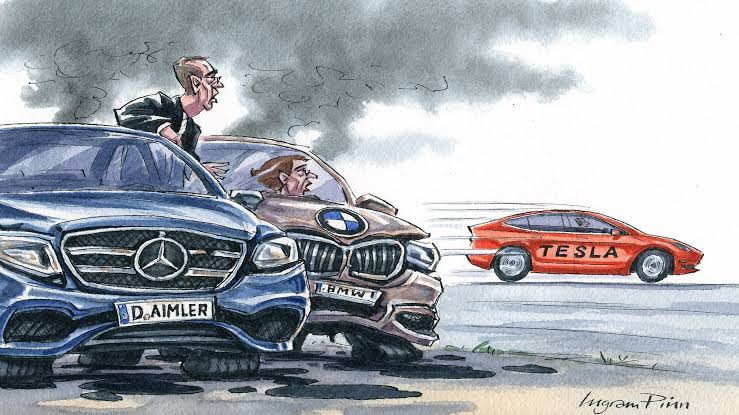 Tesla has time and again proven to be delivering the best electric vehicles from everyone's perspective.On the other hand, there are traditional car manufacturers like Volkswagen who don’t want to lag in the race of electric cars.

Tesla was ranked first as the best-selling electric car manufacturer worldwide after selling around 500,000 units alone in 2020.

The runners-up were a Chinese manufacturer SAIC. German manufacturers have been known for top-notch quality in their cars with perfection guaranteed on every component of the car. Audi, Mercedes (founded in Germany) have launched electric supercars which are way out of the league of a layman. This case is largely fulfilled by Tesla’s Model 3 which comes for $41,190 (roughly around 31 lakhs). German manufacturers have been lining up their production facilities for future EV manufacturing.

Tesla outsources its parts, which makes the company completely dependent on trade laws, bilateral relations between the two respective countries. The trade war between China and the USA has impacted Tesla. The lithium-ion battery which is the most important component of an electric vehicle, Tesla outsources from Chinese manufacturers. Since then Tesla has set up a factory in Germany, giving out a strong message to German car manufacturers. The electric car maker wants to produce many auto parts in  Berlin. Tesla has finally learned its lesson of outsourcing heavily from other countries. The American car manufacturer has started production of lithium-ion batteries in its German plant but is still heavily dependent on the Chinese.

German manufacturers are traditional and have always been insourcing their parts. The German policymakers have given certain incentives for manufacturers to promote EVs. Unlike Tesla, these manufacturers are subtle in their ways of pushing their cars into the market. The Germans seem to be analyzing the market very briefly. Volkswagen has placed a huge bet by deciding to manufacture its EV batteries. The Germans seem to be lagging, but according to analysts, the German giant Volkswagen will be the largest car manufacturer as soon as next year.  The key challenge for any EV manufacturer is to make a cost-effective battery, which decides the company makes any money or not. German manufacturers initially underestimated the challenges lying ahead of making EV’s. Mistakes are often lessons, and the Germans have learned their lesson.

Hence to summarise, Tesla does have what it takes to be the number one car manufacturer until the real player plays its game. German manufacturers will soon validate the aphorism “slow and steady wins the race."