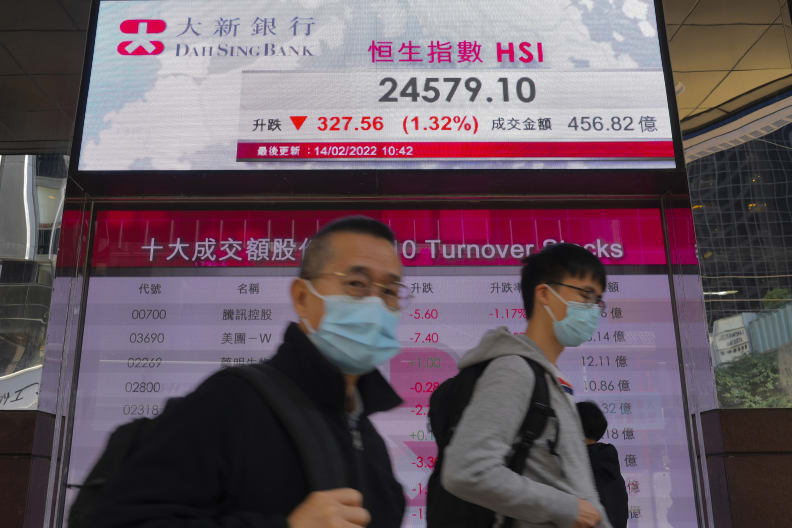 On Monday, Asian stock markets dropped and oil prices went up on fears that Russia was preparing to attack Ukraine, fearing restrictions that would cause an increase in energy costs and fuel worldwide instability.

Russia escalated its chances in the high-stakes diplomacy sport by extending military training in Belarus, while Maxar satellite pictures revealed fresh field placements of equipment and soldiers near the Ukrainian border.

According to an associate of French President Emmanuel Macron, France and Russia have promised to organize a meeting of the Organization for Security and Cooperation in Europe on Monday.

In early trading, the price of oil fell by about 2%, while Treasury futures rose. The Standard and Poor’s 500 futures were down 0.6 percent, while the Nasdaq futures were down 1.2 percent. Monday is a holiday in the United States, although stocks are still traded. The MSCI's main benchmark of Asia-Pacific stocks outside Japan was down 0.4 percent, while the Nikkei in Japan fell 1.9 percent.

Marketplaces have also been concerned about the potential of the US Federal Funds rate to tighten aggressively as inflation continues to rise. The Fed's recommended estimate of core inflation is scheduled to be released later this week and is expected to show an annual increase of 5.1 percent, the highest rate since the early 1980s.

As a result, we expect the Fed to raise the policy rate by 25 basis points in each of the next nine meetings, with the policy rate approaching balance by early next year. At least six Fed officials are scheduled to speak this week, and markets will be paying very close attention to their ideas and opinions on a likely 50-basis-point increase in March.

Recent research has urged against such a significant change, and markets have reduced the likelihood of a half-point increase to around 20%, down from well above 50% a week ago. Short-term bonds recovered some of their losses last week as the entire curved bull inverted as relatively secure buying sent 10-year rates down to 1.92 percent.

Money markets have been somewhat quiet, with the US dollar index only a bit stronger last week and last trading at 96.100, significantly off its previous record of 97.441.

The euro currency was trading at $1.1317, but it is susceptible if Russia launches a land battle in Europe. The dollar has fared less well against the Japanese yen currency. It has its own relatively secure status and was last held at 114.91, approaching the level of 114.78.

Oil prices fell for the first time in two months last week, despite a lack of movement on an Iran deal that could bring ready supply into the market. However, an agreement remains a long way off and is complicated by the prospect of restrictions on Russia, the world's largest oil producer.