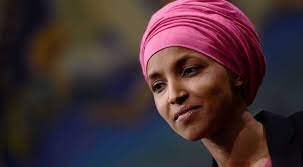 Ilhan Omar, a Democrat from Minnesota, has introduced a resolution in the US House of Representatives condemning India's human rights record and "violations" of religious freedom, including those targeting Muslims, Christians, Sikhs, Dalits, Adivasis, and other religious and cultural minorities.

In terms of declaring India a country of particular concern, lawmakers Rashida Talib and Juan Vargas have backed the resolution. This claim is based on the findings and conclusions of a report issued by the United States Commission on International Religious Freedom (USCIRF). The resolution stated that the USCIRF had called for India to be identified as a country of particular concern for three years in a row.

According to the resolution, the Indian government continues to establish its ideological concept of a Hindu state at both the national and state levels by utilizing existing power, new laws, and structural changes that are hostile to the country's religious minorities. Furthermore, the report describes the use of Indian laws such as the Unlawful Activities Prevention Act and the Sedition Law to instill fear and intimidate those who speak out against the government.

The report also mentions instances of the Indian government criminalizing, harassing, and repressing interfaith couples and converts from Hinduism to Christianity or Islam. In this regard, the report already emphasized the dangers of the Citizenship Amendment Act and the National Registry of Citizens for Indian Muslims, including the possibility of depriving millions of Indian Muslims of their citizenship or subjecting them to indefinite detention.

The resolution referred to a 2022 'Report on International Religious Freedom,' which detailed examples of violence and threats of violence against religious minorities in India, particularly Muslims and Christians, throughout 2021. During a press conference to announce the report's release, Blinken stated that India, the world's largest democracy and home to a diverse range of faiths, is seeing an increase in attacks on people and places of worship.

Rashad Hussain, ambassador-at-large for international religious freedom, also expressed concerns at the same press conference about the targeting of indigenous communities as well as Christians, Muslims, Sikhs, Hindu Dalits, and other religious minorities in India. The House urges Antony Blinken to designate India as a "country of particular concern" under the International Religious Freedom Act of 1998 in response to the resolution's additional statement of concern about the worsening treatment of religious minorities in India. The resolution has been forwarded to the Foreign Affairs Committee.