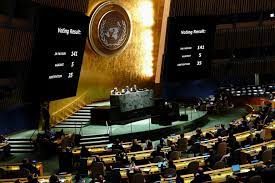 India broke its spell of abstentions on matters of the Russia-Ukraine conflict, voting in favor of Zelensky at the UNSC meeting on Wednesday. So far, India had maintained silence on issues related to the unprovoked war and has been widely judged for its muted stance. Earlier in the 11th UN General Assembly, India refused to vote on the emergency situation while a resolution was reached demanding Russia immediately withdraw its forces from Ukraine, correcting its disobedience against international law.

As per the UN Charter pacts, the 193 UN Council members are obliged to not use force against any territorial state and refrain from international violence until and unless it is employed in self-defense. Consequently, Russia's attack stands as a straight and unquestioned infringement of the covenant.

However, India had depended on Russia's veto in the past at the UN to protect itself from resolutions about the conflict with Pakistan over Kashmir. If disputes arise, the world's largest democracy also finds a strong ally in the Russian powers to defeat the Chinese forces on the India-China border. Such equations of dependency have thus made picking a side controversial for India.

Much to India's strategic relief, the UNSC sat for a meeting to review the state of affairs in Ukraine, giving India a convenient opportunity to poll in favor of Zelensky. At the council, the Russian ambassador pushed the participants to vote for or against Ukraine's president's participation at council through a virtual screen. Nebenzia, Russia's representative, objected, while 13 other members, including India, did not find enough reason to disallow. Nebenzia was of the opinion that participation of online nature was unprofessional and made sense only when the health emergency of the pandemic was a threat.

Taking advantage of the invitation offered to him, Zelensky suggested that Moscow's attacks on Ukraine only point toward future invasions of lands other than itself, making it necessary to stop Russian troops immediately. He also declared that Ukraine would not give up, marking 31 years of independence and the six-month anniversary of the war.

While excerpts from the meeting brought to light the state of international intervention in the matter, India's reluctance to align itself with one of the parties was harshly criticized. As a result, its tacit support for Zelensky during the procedural vote for the council was seen as one surprisingly directed against Russia. However, the Indian Ministry of External Affairs put such speculations to rest as they clarified: “There’s no question of us voting against Russia”. At a time when diplomatic forces are taking collective measures seriously in implementing the UN guidelines, India's ambiguity is set to be examined based on its moral compass.