Irish Language To Become An Official Language In Northern Ireland 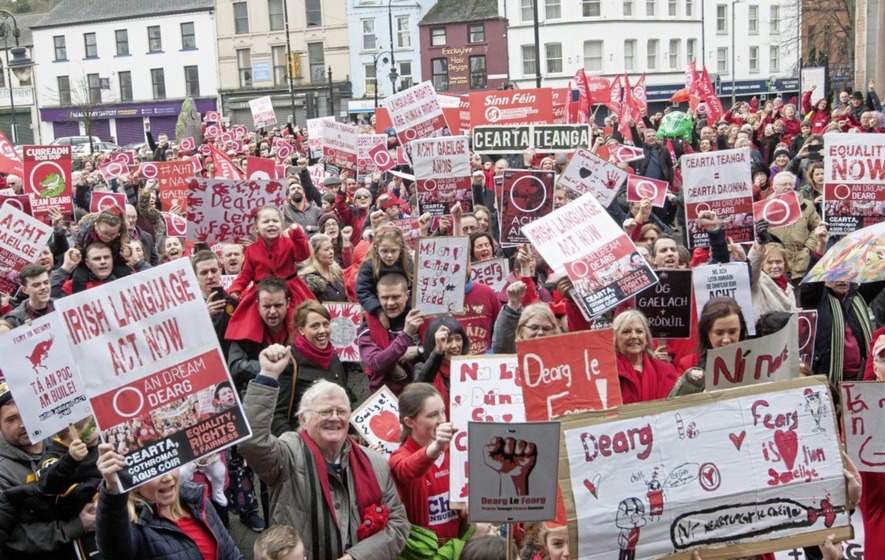 The bill introduces the creation of an Office of Identity and Cultural Expression and two Commissioner positions for the Irish language and Ulster Scots. The Commissioner for Irish will be tasked with the development of Irish within the region and “to help to facilitate interaction between Irish-speaking service users and public bodies”, according to the press release.

Unionists in Northern Ireland have long tried to prevent such a bill from being passed, to the extent that it resulted in the removal of the Democratic Unionist Party’s (DUP) last leader. Edwin Poots, who lasted a grand total of 21 days as leader of the DUP, had made a deal with the nationalist party, Sinn Féin. He would nominate fellow DUP member, Paul Givan, as First Minister of Northern Ireland and Brandon Lewis would bypass the executive at Stormont by introducing an Irish language act through Westminster.

Sinn Féin had insisted that the DUP had to commit to implementing the cultural provisions laid out in the New Decade, New Approach deal of 2020 that got the executive back in Stormont after a three-year stalemate, where Northern Ireland did not have an executive to govern the region. However, this attempt at compromise resulted in Poots losing the party leadership in June 2021 and the current DUP leader, Sir Jeffrey Donaldson, has described any attempts to introduce an Acht na Gaeilge (Irish Language Act in Irish) as “undermining the British identity of Northern Ireland”.

However, it would seem that Brandon Lewis is taking advantage of the fact that there is yet again no executive in Northern Ireland as the DUP refuse to take their seats after April’s election in protest against the Northern Ireland protocol in Brexit negotiations. Lewis introduced this new act through Westminster on Wednesday and also pledged £4 million to An Ciste Infheistíochta Gaeilge, the Irish Language Investment Fund. In a tweet on Thursday, Lewis stated, “Northern Ireland is home to a rich tapestry of identities, languages and cultures, and the Government celebrates the contribution of all of them to our Union”.

The introduction of this bill is timely as just last Saturday, thousands of Irish language activists gathered in Belfast for a peaceful protest demanding language rights for Irish speakers in Northern Ireland as promised in the New Decade, New Approach deal. The marchers dressed in red t-shirts with a white circle, the signature symbol of the An Dream Dearg Irish language rights organisation (translates as “the red group”) who organised this protest. What was most notable about the protest was the peaceful and diverse elements.

Historically, the Irish language was more closely associated with Irish Catholic identity and given Northern Ireland’s violent history, there was a worry that the protest would not be peaceful. However, the march and subsequent festival with live music happened without any incidents, perhaps because the message of the protest was not one of Irish nationalism but one of unity for all Irish speakers.

This messaging can be seen in the fact that Protestant unionist Irish speakers eagerly marched in the protest wearing the An Dream Dearg t-shirts. They were represented by Turas, a grassroots organisation established in 2011 to promote the language particularly in the Protestant Unionist community. The head of Turas, Linda Ervine, spoke to RTE News saying, “It’s a language for everybody, it’s a language of the British Isles. There’s legislation in other  parts of the UK [for other languages such as Welsh and Cornish] so why shouldn’t there be legislation here?”