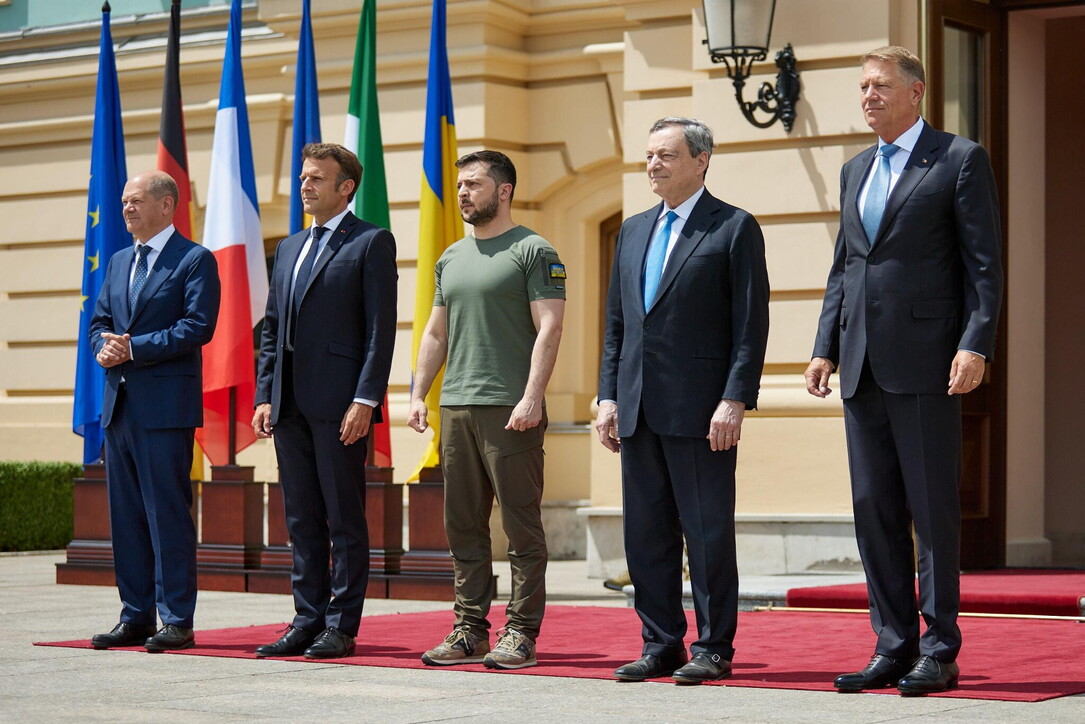 On the 16th of June 2022, Italian Prime Minister Mario Draghi, French President Emmanuel Macron, and German Chancellor Olaf Scholz visited Kyiv to meet with Ukrainian President Volodymyr Zelensky. This is the first official visit of the heads of state of the three most influential countries in the European Union since the beginning of the conflict. Klaus Iohannis, President of Romania, also participated in the meeting.

Draghi, Macron, and Scholz expressed their support for the intention of Ukraine to join the European Union; it is almost sure that soon the EU will grant Ukraine the official status of a candidate to enter the Union. The candidate status is just one of the many steps needed for Ukraine to be able to become a European Member State; It is still significant since there are many instruments, investments in particular, that the EU can activate once a country starts the procedure to reach membership.

Draghi underlined Italy's support for this membership and said, “The most important message of our visit is that Italy wants Ukraine to be a part of the European Union, wants it to have its candidate status, and will support the process in the European Council."  He also expressed his support during his visit to Irpin, the city on the periphery of Kyiv that was bombed repeatedly by the Russian forces; when he met with the head of the Kyiv regional military administration, Oleksiy Kuleba, Draghi stated that, everything that was destroyed will be rebuilt, and many programs have already been activated in this direction.

The visit of these three European Presidents together sends a strong message of unity and support from Europe, especially after the request of Ukraine for more support, in terms of military weapons from the EU. Zelensky has also accepted the invitation from the German chancellor Scholz, to participate in the G7 summit, between the 26 and 28 of June in Germany. Macron instead underlined how fundamental it is right now to send essential political signals from Europeans to the citizens of Ukraine that have been fighting for so long to remain strong.

Another theme discussed during the visit has probably been the issue of the blocked wheat imports from Ukraine; this country has a fundamental role in the wheat market in Europe, and its blockage has created many consequences, inflation being the first one, in the EU countries. A compromise is being discussed by the EU leaders and Zelensky.