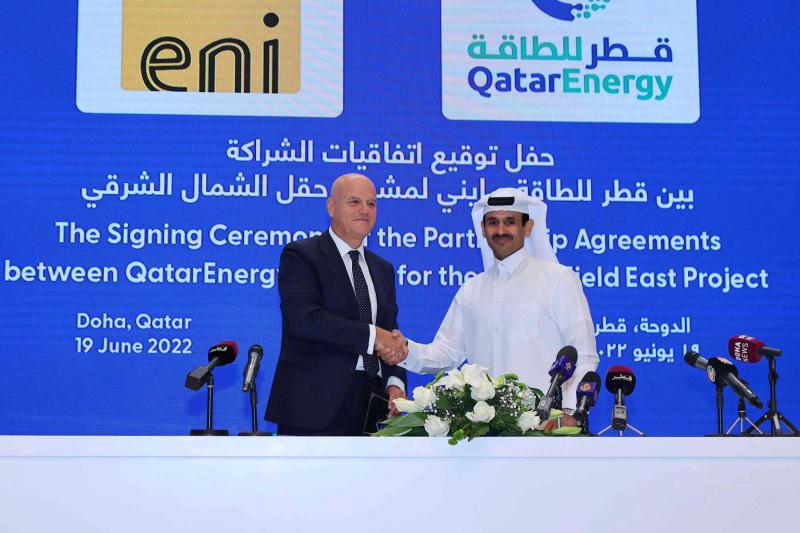 On June 19th, the Italian energy company Eni signed a profitable deal with Qatar allowing the former to acquire over 3% of the North Field East project. The Italian company has been chosen by Qatar Energy as a foreign business partner for the expansion of the North Field East (NFE). The deal has been signed in Doha by the Minister of State for Energy Affairs, who is also President and CEO of Qatar Energy, Saad Sherida Al-Kaabim, and the CEO of Eni, Claudio Descalzi.

The deal marks the end of a 27-year, highly competitive process that began in 2019. It is a significant move on the part of Eni to increase its foothold in the Middle East, which will give it access to one of the largest LNG producers in the world.

Thanks to the agreement, Qatar's LNG export capacity will increase within the NFE project from its present level of 77 million tons per year (MTPA) to 110 MTPA. NFE, a $28.75 billion project, is expected to begin its operations by the end of 2025 employing cutting-edge technology, such as carbon capture and sequestration, to reduce its overall carbon impact. As for Eni, the Italian company will retain 25% of the shareholding, while Qatar Energy will retain 75%. It is a significant move for Eni, as this will increase Italy’s presence in the Middle East’s energy market. This will also support the company's attempts toward diversification with the addition of a more dependable and clean energy source to its inventory.

The North Field East LNG project has been ideated by Qatargas, a subsidiary of Qatar Petroleum. The goal is to increase Qatar's ability to produce LNG from 77 million tons per year (Mtpa) to 110 Mtpa by 2025. During the first phase, the focus will be on the North Field East LNG project, which will generate the first gas by the end of 2025. The second phase will aim to boost LNG production to reach 126 Mtpa by 2027.

This new agreement is one of several attempts by Italy and other European Union countries to gradually phase out Russian Gazprom gas and oil supplies following the invasion of Ukraine. This becomes even more imperative after the recent cases of reduced gas shipments to Europe. For instance, on June 15th, Eni informed about Gazprom's decision to reduce the shipment of gas to Italy by 15% without any further explanation. Consequently, Italy is looking for alternative ways to stop receiving gas supplies from Russia. According to the Minister of Ecologic Transition, Roberto Cingolani, Italy will be able to say no to Russian gas in the winter of 2024–2025. For this reason, several agreements with six African states have recently been signed for the provision of 25 billion cubic meters that will substitute the 29–30 billion imported from Russia.

The first foreign partner to sign a deal with Qatar Energy was the French company TotalEnergies on June 12th. The company will get a 6.25% share of the North Field East project, and the agreement will last until 2054.

The two deals are tangible proof of Europe’s scramble for gas following the decision to cut ties with Moscow. This led the EU to rush toward greater supplies of LNG for two basic reasons: it is easier to transport and is cleaner than fossil fuels. As CNN Business reports, the reverse of the coin is that by avoiding the Russian market and addressing its request to countries that produce LNG, the EU will destabilize the global LNG market. As Europe is striving to reduce Russian fossil fuel consumption by two-thirds, the overall demand for LNG will skyrocket. This will have an impact on Asian economies, which have been importing LNG since 2010, as they will have to compete with stronger western economies.