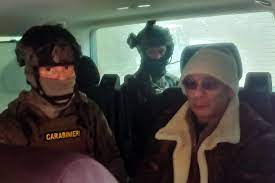 After 30 years on the run, Sicily witnesses the capture of Italy's most sought after mafia leader. Matteo Messina Denaro was infamous for violently leading one of the world's largest criminal enterprises.

According to reports, Denaro was imprisoned while undergoing cancer treatment in Palermo, Sicily's capital. He is thought to be a boss of the legendary Cosa Nostra Mafia and he was tried and sentenced to life in prison in absentia in 2002 for a series of murders.

More than 100 military personnel assisted in carrying out his capture. According to Italian media, Denaro was taken to a secret location by the Carabinieri shortly before 10:00 (09:00 GMT). He had allegedly entered the clinic under a fake identity to receive treatment.

Al Jazeera released a video that has been circulating in the Italian media showing a crowd of people in the streets cheering for the Italian police for successfully apprehending the violent criminal.

Among other murders, Denaro was convicted of truly horrible acts against humanity. He kidnapped, tortured and killed an 11-year-old for being the son of a mafioso-turned-state witness. Additionally, he was convicted of murders of anti-Mafia prosecutors Giovanni Falcone and Paolo Borsellino in 1992, as well as many deadly explosions in Milan, Florence and Rome the following year.

The criminal boss seemed to have no remorse for the numerous people he has murdered. He allegedly boasted about having enough victims to fill a cemetery.

During his period as a mafia leader, he was involved in a variety of illicit activities, including racketeering, the disposal of  illegal waste, money laundering and drug trafficking.

He is described as the Cosa Nostra's last remaining "secret-keeper." He is thought to be the source of all knowledge and to know the identities of those involved in multiple infamous Mafia crimes.

Despite the fact that Messina Denaro had been missing since 1993, it was thought that he was still delivering orders to his employees from a variety of hidden locations. However, because Messina Denaro was rarely seen on film, officials had to rely on computer composites to recreate his image of what an older version of him would look like, decades later.

The violent crime boss's voice was recorded on tape and publicly broadcasted in 2021. However instead, to narrow down their suspects, authorities had used a combination of traditional investigative techniques and advanced technologies. They had been prosecuting anyone thought to be helping or protecting Messina Denaro for more than ten years, which had damaged his network. The authorities were able to determine that Messina Denaro was ill and seeking treatment since they wiretapped his relatives' residences and only heard them speaking in general terms about cancer procedures. As time went on, they acquired information on all male cancer patients who were born in 1962 close to Trapani in western Sicily, which helped them identify the actual Messina Denaro as one of their suspects.

At a press conference on Monday afternoon, the Carabinieri appeared to contradict that they had received a tip regarding Messina Denaro's whereabouts and emphasised the careful work of investigators who managed to track down the mafia leader in a "painstaking and exceedingly delicate" operation.

According to the authorities, Messina Denaro did not seek to flee when he learned that the operation was underway and immediately upon being contacted by the Carabinieri, but rather acknowledged that he was the person they were looking for.

After his brother Piersanti was killed by the Cosa Nostra in 1980, the president of Italy, Sergio Mattarella, praised the interior minister and the carabinieri military police.

Prime Minister Giorgia Meloni observed a moment of silence at a memorial in Sicily honouring Giuseppe Falcone and the other terrorist victims from 1992. She called the arrest a “great victory” as she was thanking the armed forces for their assistance in the arrest for the most “important” member of the mafia criminal group.

For many years, Matteo Messina Denaro symbolised the state's failure to reach the highest echelons of organised crime syndicates. His detention is an unexpected sign of hope that the Mafia can be defeated in the south of the country. The Italian people may regain faith in their country's strength and capacity to keep them protected.