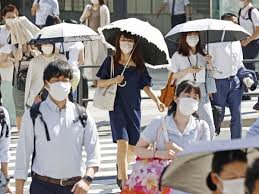 Most of Eastern Japan has been burned by heat for a week since Friday, with the government urging residents to reduce electricity use as much as possible while still running air conditioners to keep safe. These temperatures are the highest in at least 147 years. The area surrounding Tokyo was expected to experience its seventh consecutive day of highs above 35 Celsius (95 Fahrenheit), and a hot weekend was also anticipated. The western city of Nagoya was expected to reach a scorching 40C. On Monday, respite may come in somewhat cooler temperatures and possibly rain.

For the first time this week, authorities did not issue a warning of a potential power shortage. However, energy supplies will remain scarce due to rising energy prices, fueling calls within the government to restart more nuclear reactors that have been shut down since the Fukushima disaster in March 2011.

A potential power outage on Thursday was dangerously close to occurring on the greater Tokyo power grid, which serves 37 million people. The situation has improved, though, since July 1 marked the beginning of the government's response to the summer's high demand. Japan typically experiences sweltering summertime conditions. For example, due to the heat in late July for the Tokyo Olympics, some events had to be rescheduled for the previous year. However, this year's June temperatures were unusually high, catching authorities off guard.

"Due to the record high temperatures, we had (power) demand nearly equal to summer peak levels in June - before we could gather sufficient supply resources. That's why things got tight," an official at the Ministry of Economy, Trade, and Industry (METI) told reporters.

In Japan, where mask use was common even before the pandemic, the authorities cautioned that dangerous conditions would persist and urged people to refrain from wearing them outside. However, this message took some time to catch on.

Earlier this week, a few factories decreased their operating hours, and a few businesses urged employees to turn off any unneeded appliances. In addition, a few commuter train stations reportedly switched down their escalators. At the same time, the Nikkei Shimbun claimed that an entertainment park in the nearby city of Yokohama turned off the lights on its ropeway and Ferris wheel at night.

The early conclusion of the rainy season, which in some places of Japan lasted only two weeks, coincided with the hot wave, leaving some areas calling for water conservation and some dams partially empty. Next week, a tropical cyclone may pass across Japan, bringing with it rain and a little bit of a chill.