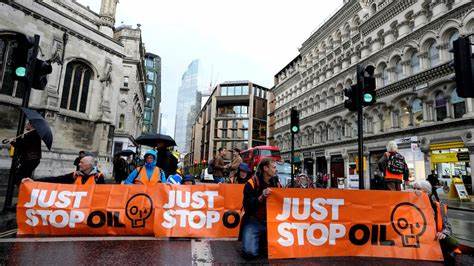 Throughout October, ‘Just Stop Oil’ activists came forward to rally against the United Kingdom’s Government inaction regarding the climate crisis. This article addresses ‘Just Stop Oil(‘s)’ aims and proposed resolutions to the climate crisis. Firstly, this article will present facts, with supporting statistics, regarding the problem with the oil industry. This will draw upon environmental, economic and health factors. Furthermore, ‘Just Stop Oil’ will offer resolutions to their identified issues, which give weight to their protests. ‘Just Stop Oil’ demonstrates their resolutions for climate change in rallying cries, in the hope that their activism will spur social change.

‘Just Stop Oil’ is a campaigning organization that argues against the U.K. Government's new oil extraction. The campaigners argue that the extraction of new oil will inevitably lead to the death of our planet, in turn sacrificing the younger generation's lives. According to The Wilderness Society, 1.2 million oil production sites pollute the U.S landscape, and from this 25% of greenhouse gases come from these lands. Additionally, the U.K. Government spend £230 million every week on the production and usage of these fossil fuels. In addition to the environmental and economical damage the extraction of oil causes, oil extraction will effect the health of the citizens in the surrounding area.

In an attempt to resolve these issues ‘Just Stop Oil’ has stated that in under ten years, humanity must discard its reliance on fossil fuels. To achieve this, the organization suggests that our world needs to become both low energy and low carbon. If this is not the case, the organization believes our excessive use of fossil fuels will collapse our society. With such high stakes, it is understandable why activists resort to disruptive and taboo behaviour to oppose fossil fuels.

During this time, the U.K. saw activists displaying disruptive behaviour, leading to anarchy in the streets of the capital and surrounding areas. Although these are non-violent protests, many of the public take issue with the disruption their protests cause, whether through inconvenience or destroying a part of our classical culture.

A multitude of incidents have led to these anarchist-esque behaviours displayed by activists. For example, in early October, the world saw two activists destroying Vincent Van Gogh’s famous ‘Sunflower’ painting. The activists received an excessive amount of backlash in response.

In an interview with Jeremey Till, a professor of architecture at Central Saint Martins, University of the Arts London, activists Anna Holland and Phoebe Plumer stated that throwing soup at the iconic painting was to spur a discussion. For ‘Just Stop Oil,’ some activists are willing to go to extreme lengths to disrupt culture and perform taboo acts. This is for the U.K Government to hear their rallying cries and get the attention of world organizations.

On another occasion, a ‘Stop Oil’ activist took to social media to gain the British Government’s attention by shutting down the M25. She, and 23 other activists, led a rallying cry that the climate crisis is only accelerating in speed due to the United Kingdom's demands to produce more oil. The activists claim the Conservative Government is allowing more multinational companies to invest in fossil fuels which is not only killing the planet but us as well.

To conclude, ‘Just Stop Oil’ has identified vital facts which demonstrate the danger our planet, and future generations face. In response to these statistics, they offer resolutions to overcome the anarchy and disruption that plagues our planet. ‘Just Stop Oil’ have demonstrated both their passion and message through anarchical actions, to encourage discussions surrounding climate change.

Therefore, I ask; is this anarchical behaviour necessary to spur conversations surrounding the climate crisis? Perhaps in time, we shall see.