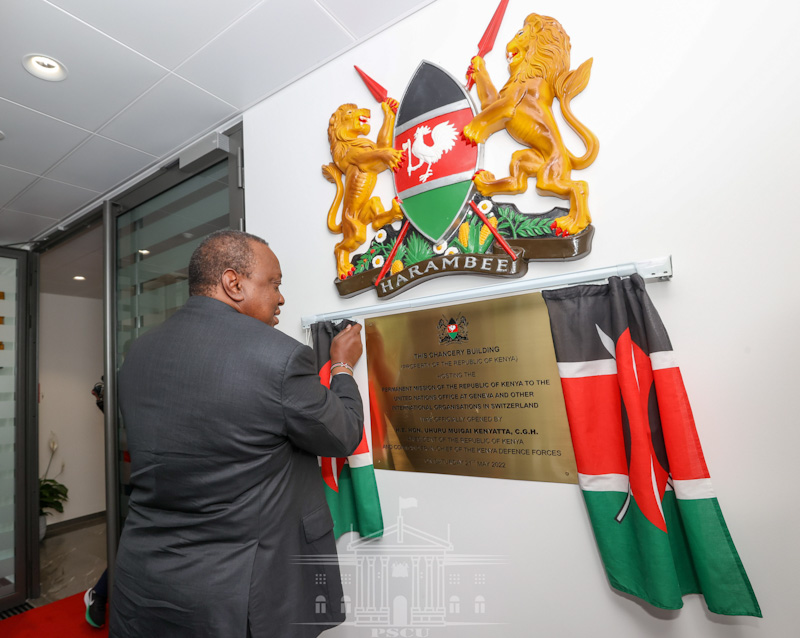 Kenya’s President, Uhuru Kenyatta, opened a new chancery in the Swiss capital, Bern. The embassy, which was opened during the president's official tour of the country, was hailed by Swiss President Ignazio Cassis as a crucial development in relations between the two countries. The chancery is set to enhance trade between the two countries, which has significantly developed over the years. Kenya’s exports stood at 40 million dollars and imports from Switzerland stood at 80 million dollars annually. While the trade deficit remains visible, Kenya continues to expand its trading base with Switzerland, with coffee, tea, and horticultural products forming the main exports for the country. President Uhuru Kenyatta further highlighted that Kenya remained strategically engaged in multilateralism due to its substantial presence in Geneva since 1995, forming a key contribution toward a better world. He also recognized the role of Kenya’s permanent mission in Geneva in promoting the state’s interests in the global arena.

During the tour, the president also met with President Ignazio Cassis and highlighted Kenya's desire to enhance the trade, economic, and investment ties between the two countries. With both countries showing commitment to boosting relations, Ignazio Cassis reiterated that Kenya remains the investment destination of the Swiss Confederation in the East and Central African region in the areas of research, education, training, as well as hospitality, and defense.

The president also attended the first in-house World Health Organization (WHO) session in Geneva, where he addressed the assembly, outlining the policies and reforms his government made to achieve Universal Health Care (UHC), which formed his key pillars, also known as the Big 4 Agenda. He also called on the member states to forge a united front in combating pandemics and create lasting solutions to avoid similar occurrences from happening.

President Kenyatta spoke on what is believed to be his final international visit as the president of the Republic as the state prepares for its general elections in August. He is set to retire after ruling the country for nine years and two terms.