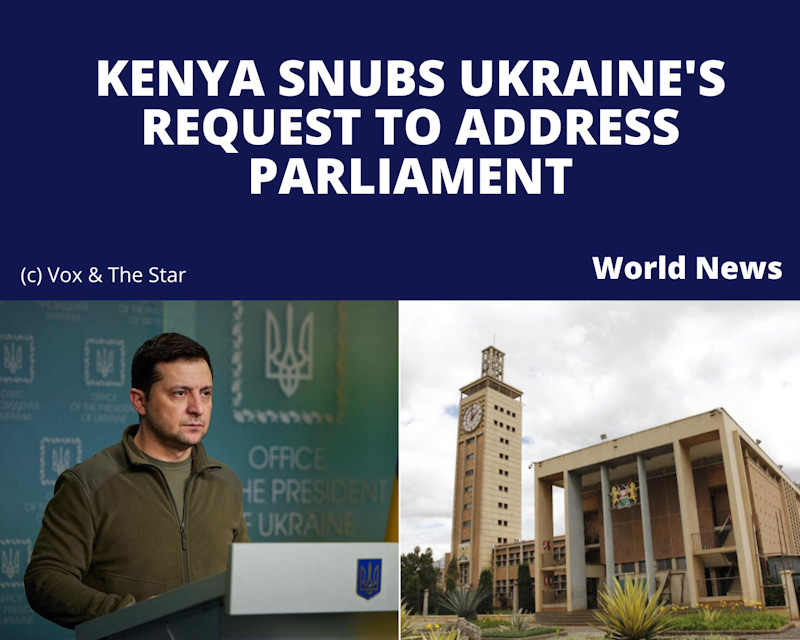 As deeper sources indicated, the Kenyan government, through its foreign ministry, declined the request as it believed that they were already putting enough effort at the United Nations through the UNSC. The recent report was denied by the Kenyan diplomats in Nairobi, further citing that they already maintained a positive position of encouraging the end of the war in the country.

The Ukrainian government, through the Embassy in Nairobi, has however protested the “two-sided” behaviour by Kenya as it recently met the Russian Envoy in Kenya during the early stages of the war. Kenya further responded by saying that the Ukrainian government’s address to the parliament should not be the main part of the agenda, but rather, should use the diplomatic means allotted to them.

Since the beginning of the war, the Ukraine Government, through its president, have addressed national assemblies around the world including the European Union, Canada and the United States as well as other high-profile events such as the Grammy Awards, in a bid to raise awareness of the war and its effects on the population and calling on these citizens to take up arms and join the conflict. Ukraine recently expressed intentions to address the African Union heads of states in Addis Ababa, a move that has not yet been clarified to date but was recognized by the current chair, Moussa Faki.

While Kenya continues to call for the end of the war, through its key diplomatic channels of the UNSC, the country has continuously exercised caution in the relations it undertakes with both Kiev and Moscow, through its Non-Aligned foreign policy, they have adopted the stance of the African Union, which calls for end to the war and further condemning the harsh economic sanctions given to Russia.

Kenya’s Foreign Affairs Minister, Ambassador Rachel Omamo, however, stated that the Nairobi delegation would meet the Ukrainian delegation in Nairobi, for talks on issues including the war, but however emphasized that the national assembly shall not be addressed. This is, as the parliament further expressed, that there was no intention for the country to be directly involved in the war whereby, they experienced positive relations with both countries. Kenya had recently abstained from the vote that saw Russia be removed from the UN Human Rights Council due to its role in the invasion of Ukraine.

The Russian-Ukraine war has reached its 47th day, with nearly 2,000 civilians dead and another 2,450 wounded according to the UN High Commissioner of Human Rights.