Microplastics Found in Human Blood in a New Study 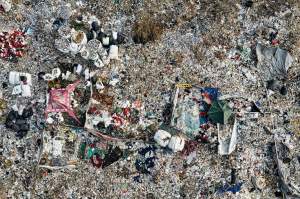 Plastics are everywhere. They are the most prevalent type of debris in our natural environment. The world is producing twice as much plastic waste as it was two decades ago, accelerating the effects of climate change and altering our ways of living.

According to the 2022 report of the Organization for Economic Co-operation and Development (OECD), plastic consumption has quadrupled in the last thirty years due to rising demand in international economies. The OECD reported that between 2000 and 2019 global plastic production more than doubled to 460 million tonnes, accounting for the 3.4% of global greenhouse gas emissions. Although much of it can be recycled, “only 9% of plastic waste is recycled (15% is collected for recycling but 40% of that is disposed of as residues). Another 19% is incinerated, 50% ends up in landfills and 22% evades waste management systems and goes into uncontrolled dumpsites, is burned in open pits or ends up in terrestrial or aquatic environments, especially in poorer countries” (OECD 2022 report).

Plastic debris comes in different forms and its environmental impact is self-evident. A less visible effect of global plastic production is microplastics, small plastic pieces less than five millimetres long. Researchers first reported fragments of plastics, particularly polystyrene, in the ocean in the early 1970s. The notion of ‘microplastic’ was introduced in the mid-2000s. Microplastics result both from commercial product development and the breakdown of larger plastics. By being so tiny, they can be carried by air, piled up at the bottom of the ocean, or end up in the food chain.

The impact of microplastics on our marine ecosystem has long been a source of concern. Microplastics have been found in a wide range of marine organisms, including fish and shellfish. As the world population grows and more products containing microplastics are manufactured, human exposure to this is inevitable. However, there is still a significant lack of research on microplastics and their effects on human health in this field.

In a 2022 study carried out in the Netherlands and published by the journal Environmental International, researchers managed to develop a method for detecting microplastics in human blood. The research,  funded by the Dutch National Organization for Health Research and Development and Common Seas, showed the presence of plastic particles in the blood of 17 of 22 study participants (or about 77% per cent of the sample).

●      poly(methyl acrylate) (PMMA), used in dentistry and other medical applications

Half of the samples contained PET plastic, commonly used in drink bottles; one-third contained polystyrene, used for packaging food and other products, while a quarter of blood samples contained polyethylene, from which plastic carrier bags are made (The Guardian). “Our study is the first indication that we have polymer particles in our blood - it’s a breakthrough result,” said Dick Vethaak, an ecotoxicologist at the Vrije Universiteit Amsterdam, to The Guardian. “The particles are there and are transported throughout the body” Vethaak added, despite the fact that the amount and type of plastic varied greatly between blood samples.

The big question is what does this do to our bodies? Various studies have found that microplastic can stretch the membranes of human red blood cells and greatly reduce their mechanical stability which can affect their proper functioning and alter, for example, their ability to transport oxygen. Microplastics were also found in the placentas of unborn babies, on both the foetal and maternal sides of the placenta, as well as in the membrane within which the foetus grows. However, the long-term effects are still unknown.

According to the 2022 study, “it remains to be determined whether plastic particles are present in the plasma or are carried by specific cell types [...]. If plastic particles present in the bloodstream are indeed being carried by immune cells, the question also arises, can such exposures potentially affect immune regulation or the predisposition to diseases with an immunological base?”.