Missile Testing Ramps Up Tension Across the Korean Peninsula 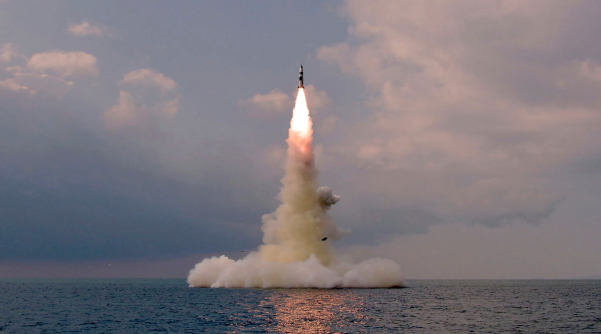 North Korea’s most recent missile testing attempts have provoked South Korea into making a quick and powerful response. On Tuesday, October 4, North Korea launched a ballistic missile an estimated 4,600 km off its coast, gliding right over the country Japan. Japan and South Korean governments have since responded, with Japan’s defense minister Yasuka Hamada stating they would focus on bolstering their defenses and would not rule out any counterattack contingencies.

South Korea in turn has worked closely with the United States to test its own weaponry as a show of force. Joint bombing drills have been conducted and carried out by the U.S. and South Korean fighter jets across the Yellow Sea. Furthermore, a report from Yonhan News confirmed with South Korea’s military that the two allies both fired their own set of Army Tactical Missile System missiles (ATACMS) against mock targets.

These reactionary exercises have contributed to heightened tensions, and  not all have been performed without error. Early on the morning of October 5, a South Korean missile malfunctioned mid-air and crashed into the ground during a live-fire drill. This caused a rout of panic among the citizens of Gangneung, who believed the defective missile was a North Korean attack.

Gangneung’s fire department and city officials acted quickly.  Sending in an emergency response team to contain the situation. Following this, the South Korean Joint Chiefs of Staff reported that there were no injuries and that an investigation  would be held to determine the reason behind the malfunction

Uneasiness continues to fester as North Korea remains undeterred from the show of force displayed by its neighbor. Not only has North Korea fired two more ballistic missiles toward the eastern waters, but were also later ordered to fly 12 warplanes across the Korean border conducting air-to-surface firing drills. South Korea responded as quickly as possible, flying 30 military planes in response. With both sides refusing to back down experts believe North Korea is beginning to set up for another nuclear test in the near future.

In an effort to combat this the United States, South Korea, and Japan have destroyers running joint drills in an  attempt to intercept any armed ballistic missiles fired from North Korea. This effort will be led by a strike group spearheaded by the USS Ronald Reagan aircraft carrier. In response, North Korea’s foreign defense ministry stated that the Raegan-led strike group only poses “a serious threat to the stability of the situation on the Korean peninsula and in its vicinity.” The North Korean regime has condemned the United  States’ efforts to compose even tighter sanctions on the North within the United Nations Security Council. Claiming these recent missile tests were only a counteraction to joint US-South Korean drills.

Diplomatic efforts have been strained further and further with each missile test. Tensions have grown both on the peninsula and on a global scale as the world watches on alongside the nuclear tensions growing between Russia and Ukraine. North Korea seemingly adds to this as its military has conducted over 40 missile launches in just the past year, with seemingly no intention to slow down.

“The Hurt Locker” Tells a Story of Addiction Through War