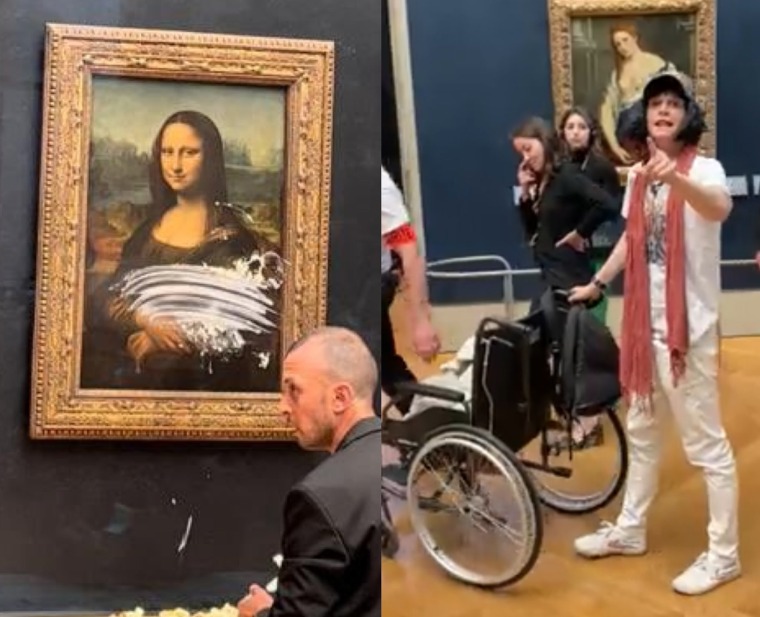 Mona Lisa, one of the world’s most famous artworks rendered by Leonardo Da Vinci was the victim of a vandal attack last Sunday, in what seems to be a publicity stunt fighting for climate change.

The vandal, a 36-year-old french man, was allegedly disguised as an old lady. He was described as wearing a wig and lipstick and sitting in a wheelchair. Once the wheelchair was pushed to the front of the crowd viewing the painting, the man stood up and tried to smash the painting before smearing a pastry on the glass and throwing roses at the crowd.

Fortunately, eyewitnessTwitter, the famous artwork is protected by a bulletproof glass panel and was not damaged in the demonstration.

An eyewitness @LukeXC2002 from Twitter described the scene firsthand:

According to a story published on Sky News on May 30 2022, Spokesperson Marion Benaiteau described the case: "A visitor simulated a disability to use a wheelchair and approach the work installed in a secure display case."

"The Louvre had applied its usual procedures for people with reduced mobility, allowing them to admire this major work."

Once near the painting, she said "this individual threw on the glass of the Mona Lisa a pastry that he had hidden in his personal effects"

The unknown man has been sent to the police psychiatric unit. There will be an investigation into the damage to cultural artifacts.

Sadly, this is not the first time this painting or the museum was attacked.

Over the years there have been several cases regarding attempted vandalism to the Mona Lisa, leading it to be installed in a bulletproof glass panel. However, the Louvre itself has also seen a number of security breaches. In 2017 the museum was evacuated in February, May and June due to three security threats.

The museum also had to involuntarily close its doors on 27 May 2019 due to a strike as even their security staffers believed there were issues of overcrowding and inadequate evacuation procedures.

It is unclear whether this attack was one of activism or simply a prank. However, the objective was for the message to be public and viral. This demonstration comes only weeks after another very public and viral activism stunt at the Cannes film festival 2022 when a young woman managed to gain entry into the glamorous event only to strip semi-nude to create awareness of the sexual harassment between Russian soldiers and Ukrainian women.

Rainbow Capitalism: Why The Pride Logo Is Not Enough?