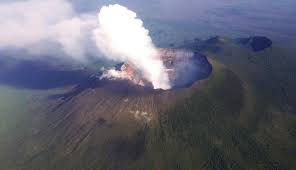 Mount Nyiragongo, the 11,500-foot-high butte inside Virunga National Park in the Democratic Republic of the Congo, erupted last Saturday, 22nd may, killing at least 31 people. Afterward, the area has experienced a series of earthquakes and aftershocks. Some felt so strong as far away in Various parts of Neighboring nation Rwanda. The volcano last erupted in 2002. According to national records, 110 earthquakes and tremors have been recorded around the Mount Nyiragongo volcano, in the Democratic Republic of Congo.

Nyiragongo's lava lake at the top is the most voluminous in the history of the world. The volcano owes its existence due to the activity of the Great African Rift. The rift is still widening and expanding. This expansion will lead to the creation of a new ocean, separating the bulk of the African continent from its present eastern portion. The volcano is a decade old. These volcanoes need extensive study due to their history of having large destructive eruptions and proximity to destroy densely populated areas.

Dario Tedesco, a volcanologist who has been surveying the volcano, told the media, ''regional faults, inside the rift are contributing to the earthquake activities in nearby areas.'' He cited that the crater top is collapsing. It was frozen for years, and it is going down now gently, and it is a good sign.

According to researchers, the black ashes from the volcano indicate an explosion.  Gray ash does not show any alarming danger.

Tedesco, has been studying the volcano since 1995. he told local media, the volcano, has passed the peak of seismic activity. Meaning, earthquakes will reduce now. But he cannot predict the volcano for another eruption. He & his team need a few more days to ascertain if it's safe for people to return home or not.

At present, 4 Lakh people, are already evacuated from Red Zones, Goma city, and its surrounding areas. Goma is the worst-hit nearby city. According to official projections from the United Nations and other Organizations, the city is home to approximately 6.7 Lakh people. This Number is unofficially expected to be around 11 Lakh people.

Not only this, 5 Lakh people in the Democratic Republic of Congo is currently living without clean drinking water after a volcano erupted. Many reservoirs and pipes are damaged, due to eruption on 22nd May.

The country suffers from Cholera and is expected, to rise after the eruption.

'Masuku' a CO2-related disease, has killed children even more recently in locations where the gas seeps from the ground at relatively high levels. The levels are expected to rise after the explosion due to the opening of new vents.

The volcano erupted last in 2002. The incident left 250 dead and 12 lakhs without homes. At that time, the crisis was managed by the United Nations.

The eruption in 2002 led to massive international support and much scientific research. Some warned, about the danger of rebuilding the city again near the lava site will be hazardous and dangerous for the future. The advice was dropped, and the city expanded nearly four times. And also covering the previous lava surface.

The laboratory that researches and keeps an eye on the activity of Volcano was defunded last year. Hence, the body stopped operations. The/ defunded led to a massive failure of saving people across the outskirts of a volcano.

In 2002, the same body raised the alarm for a volcanic eruption. Unfortunately, at that time, the Rwandan army was in a proxy war with Congo and was trying to occupy the area. Plus, the political instabilities of government became a reason for the alarms by the researchers to remain unheard. The result was many people were left homeless as immigrants to Rwanda.

It is need of the hour in Congo that the local and national government needs to be aware of the risks from tectonic rifting and the volcano. For this, the Goma Volcano Observatory should receive the resources and independence to fully operate, as the only authority. And Congo should listen to the UN for its development and betterment. Else, the Volcano and other problems will continue to make Congo Suffer.