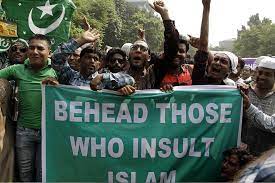 A Sri Lankan factory manager was lynched to death and then set ablaze to set an 'example' for citizens. Various disturbing clips surfaced on social media where Priyantha Kumar was seen being brutally beaten and burnt. Even infuriating is the fact that the perpetrators of the crime had no guilt whatsoever. They took selfies with the burning corpse and shared them on their accounts. The crime of the man? He allegedly tore a poster of the hard-line Tehreek-e-Labbaik Pakistan (TPK) containing Quranic verses and threw it in the dustbin. This poster of the Islamist party was pasted on the wall adjoining the office of Kumar. Some factory workers saw him removing the poster and spreading the word around. Pakistani Prime Minister, Imran Khan tweeted " The horrific vigilante attack on the factory in Sialkot and the burning alive of a Sri Lankan manager is a day of shame for Pakistan. I am overseeing the investigation and let there be no mistake, all those responsible will be punished with the full severity of the law. Arrests are in progress." The local chief minister remained tight-lipped, describing the tragedy as a "very terrible situation," while the police remained tight-lipped, saying that the facts would be discussed after a thorough investigation. While lynching Kumara, the mob screamed slogans and triumphantly claimed that blasphemy was the reason for his death. However, police Assistant Commissioner Mohammed Murtaza believes that the workers may have a private motive for harming the manager and that blasphemy is just a cover for them. So far, around 50 people have been arrested, and the surveillance material is being studied to identify other perpetrators.

There was no judicial interpretation engaged in this episode. Hence, it has nothing to do with legislation. It's comparable to mob lynching in India or everywhere else in the world, with the majority versus the minority as the typical trend. Minorities are often protected by laws, which promise security through fundamental or human rights. There are also laws in place to prevent hate speech and religious harmony. Section 295 A of the Indian Penal Code stipulates that intentionally and maliciously injuring religious sensibilities of any class is a serious act. However, Pakistan has notorious blasphemy laws, which can result in death sentences. Asia Bibi, who was sentenced to death in 2010 after being accused of blasphemy, was one of these examples. After a decade of court battles and international pressure, she was acquitted last year. Critics linked the Sialkot incident to the central government's new policy towards TLP. This Islamic organization was banned earlier but in the wake of protests in Lahore which killed 6 police officers, this ban was lifted. Due to their government being in a subservient position, such cases are escalating. Hussain Haqqani, a scholar at Hudson Institute and former Ambassador to the US said that "The state machine supports those who are perpetrating violence in the names of religion instead of protecting the victims. Only recently the government cut a deal with TLP which was responsible for killing policemen during violent protests." Almost all religious traditions have inextricable ties to specific sacred objects or practises, which would be harmed if they were to be defiled. While administering civic life, the legislature must put religious bias aside. Blasphemy will become a site of political contestation whenever religion and authority are linked, and anarchy will lurk on the horizon.

Blasphemy laws in Pakistan are inherited from the British colonial enterprise, which enacted a set of religious regulations in the Indian subcontinent in 1860 to quell Hindu-Muslim strife. These rules were developed by the British divide and rule ideology, but they were rarely implemented even after Pakistan gained independence. In 1980, General Zia-ul-Haq added five new sections, all of which promoted Islam, effectively criminalizing practically everything a non-Muslim can do in the name of Islam. According to the final provision, anyone who insults Islam's Prophet or uses insulting remarks against any of the Islamic religious figures can be prosecuted with blasphemy. No proof is required for the interpretation of his words; it is the majority's word versus the minority's. Between 2011 and 2015, more than 1296 blasphemy cases were registered in Pakistan. Other Islamic countries, such as Saudi Arabia, Iran, Malaysia, and Indonesia, take into account a variety of elements in similar cases, including the accused's age, mental health, intent, and habits. The prophet is termed "liar" in Q.40:24, "possessed" in Q.15:6, and "foolish" in Q.7:66 in over 200 passages in the Quran. Despite such insults, the Quran never calls for lashes or death, although it does mention in Q.2:256 that "faith is not compelled." The death penalty should not be applied to blasphemy, according to Pakistan's previous Chief Justice. In a poll published in 2014 by The Nation, a Pakistani daily, 68 percent of respondents said that blasphemy laws should be repealed. The majority of the world's blasphemy laws are ambiguous and imprecise, allowing for a wide range of applicability.

A blasphemy law might protect some people's beliefs, but if it restricts the freedom of life for others, it is a shame on Human rights. To combat hate speech, useful and precise regulations must be enacted. The Rabat Plan of Action, which specifies a concrete six-step threshold test for assessing when something is incitement to hatred and violence, can serve as a model. It is high time Pakistan and the rest of the world work to ensure a harmonious and pluralistic society.