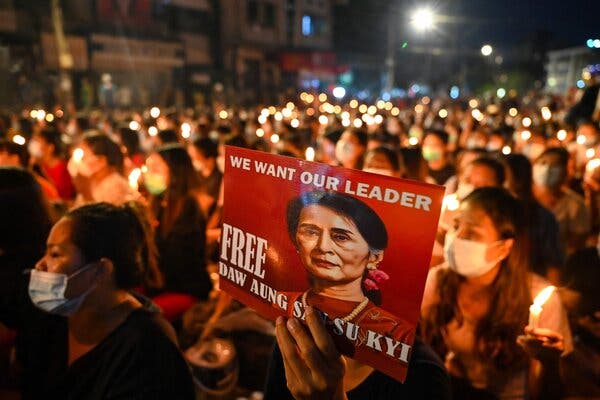 Among several cases, Monday’s ruling sentenced a 76-year-old ousted leader of Myanmar Daw Aung San Suu Kyi, to 4 years in jail, in charge of inciting public unrest and breaking Covid-19 protocols. She is facing dozen series of charges against her, which can keep her locked up for decades.

Ms Aung San Suu spent several years under house arrest due to the previous government before she was freed in 2010. She emerged victorious in the 2015 elections leading from National League for Democracy (NDL). Her party once again came into power in November last year, but right before her party were to take seats in Parliament, they were accused of rigging voting, and thus the military seized the power.

Earlier this year, she was detained on February 1 in a military coup. She has a total of 11 charges approximating imprisonment of 102 years against her.

Many came in support of Suu Kyi, calling detention a politically motivated strategy to exclude her by Junta Government because she stands out as the most popular in Myanmar politics and can prove a formidable threat in upcoming years. Her trials are being held in closed-door hearings in Myanmar’s capital, Naypyidaw. All her five lawyers are barred from communicating with the media, stating that their exchange of information can result in destabilizing the country.

“This ridiculous ruling is a travesty of justice,” Charles Santiago, chairman of ASEAN Parliamentarians for Human Rights and Malaysian legislator spoke, highlighting the concern over the illegal takeover by the Junta.

Since the coup, prosecutors are loading her with charges as the case proceeds. The Monday verdict marks the beginning of the several which are expected to be declared in the coming months. It is another attempt to stifle democracy and limit freedom.

The incitement conviction leading since the last year after the military coup held Suu Kyi a flawed leader, provoking disruption and sabotaging the nation’s peace.

The charge of violating Covid-19 protocols roots from an episode of 2020 elections in which she stood outside, covered in a face mask and face shield, and waved to her supporters passing by in vehicles.

Suu Kyi is pressed with a slew of charges, including- incitement, violating Covid-19 protocols, corruption, colonial-era Official Secrets Acts, electoral fraud and many more. Her trials are closed to media and spectators. However, the supporters have come out wholeheartedly, declaring it a military’s agenda to end her political career.

Suu Kyi is like a godlike figure in Myanmar for her supporters, who see her as a deity to defend harmony and democracy against offenders, which won her a Noble Peace Prize. But, her image is constantly being tarnished internationally by the military coup.

Amnesty International’s Ming Yu Hah called out the corrupt implications of the military on Monday as “bogus charges are the latest example of the military’s determination to eliminate all opposition and suffocate freedoms in Myanmar”.

In retaliation to the allegations, the military, which has ruled over Myanmar for decades defended its coup calling these fraud accusations.

The international pressure to release Aung Sang Suu Kyi on Junta to reclaim and resettle democracy witness upfront protests. However, there has been no sign of change as of now. The clashes with anti-coup protestors prevail throughout the country. More than 1,300 people were killed and thousands arrested since the outbreak of the military coup in February.

The International community, without deferring anymore must step up to intervene to safeguard the lives of civilians and hold the violators of justice accountable. It must ensure humanitarian aid as a matter of prime importance.