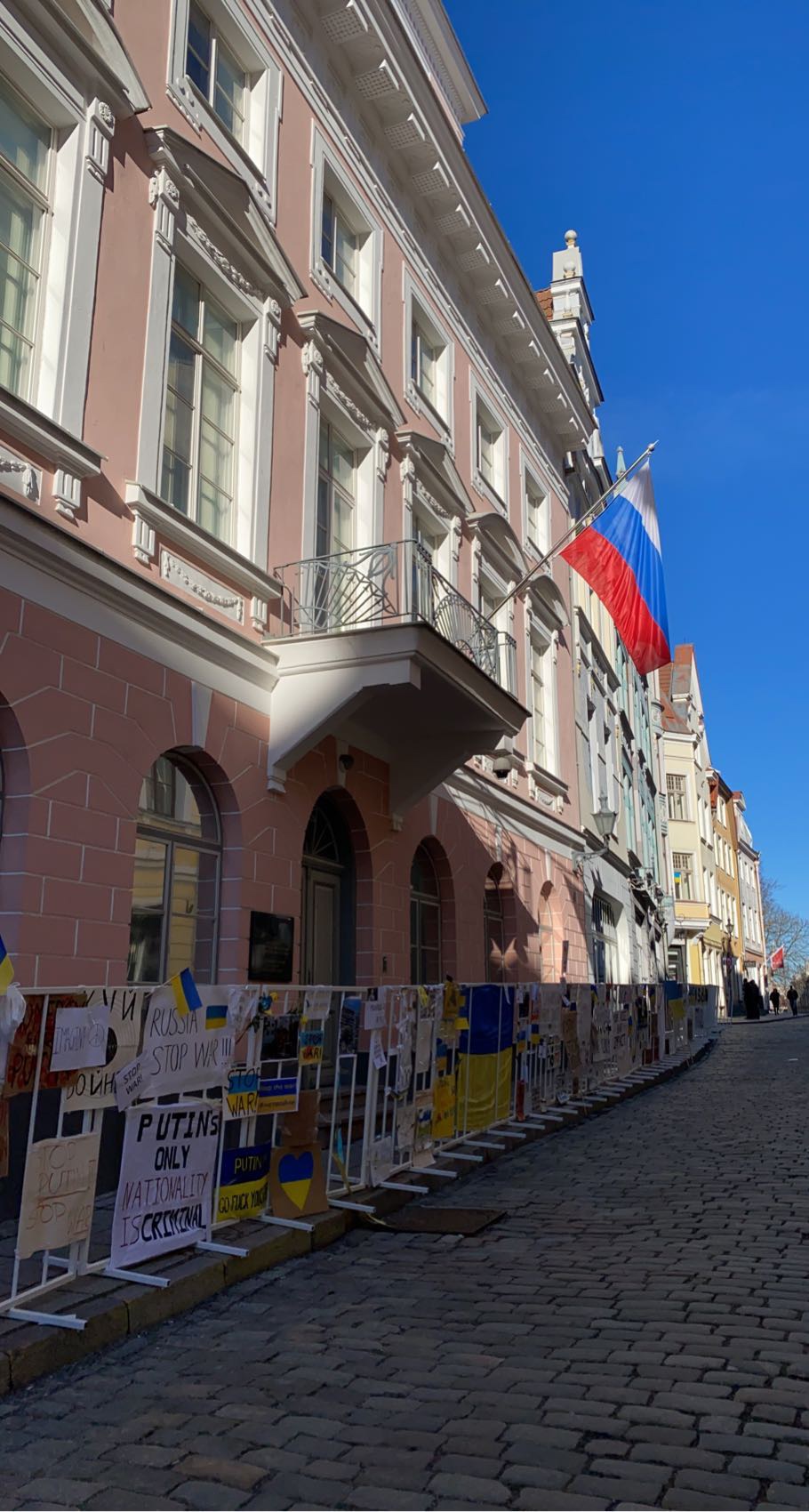 Narva, Estonia is located on Russia’s border and is the checkpoint for road traffic between the two nations. Driving across the bridge into Estonia, even at night, you see the distinction in architecture between the fortresses on each side of the river. For a Westerner, like myself, (fleeing from Russia days after the Ukrainian invasion) travelling across this bridge signified a sigh of relief in terms of safety and security. However, for some people, this border does not hold such poignance. In Narva, according to Bolnews, 95% of the population speak Russian and 30% are Russian passport holders.

The Estonian Soviet Socialist Republic saw mass immigration of Russians into the country. After the fall of the Soviet Union in 1991, many questions were raised regarding the nationality of these migrants and their families now living in the independent country. Shortly after, the government introduced new regulations regarding who was eligible for citizenship. With a large Russian speaking community, many had not fully integrated by learning the Estonian language, which became a condition of Estonian citizenship. Because of this prerequisite and Estonians not being allowed to hold dual citizenship, the population who failed to qualify were given ‘grey’ alien passports and considered stateless.

Now, with the increasing Russian belligerence towards NATO countries (Estonia being one of them) and more NATO forces entering Estonia, much ambiguity has been caused for alien passport holders and the Russian speaking community in Estonia.

Last month in Narva, the Estonian Defense Minister Kalle Laanet attended a town hall meeting to address local concerns. Previously, he had stated that the invasion of Ukraine would cause parts of society to look ‘at the issue differently’, implying grounds of ethnicity, but that the country must remain united regardless. This is against a history shaped by distrust and suspicion between the Russians and Estonians; for the Estonians, the inferior treatment at the hands of the USSR and for the Russians, the problematic change in relationship within the country after Estonian independence in 1988.

In Narva, the ambience has deteriorated. Only months ago, there were daily pedestrian crossings at the border with Deutsche Welle reporting up to 3000 daily. To the East, there is cheaper petrol and to the West, popular European products. However, this has dramatically changed since the invasion. From my own experience on a bus from Saint Petersburg to Tallinn, this materialised into a four-hour border crossing, the segregation of Ukrainians from other passengers and the offloading of kilos of luggage late into the sub-zero snowy night. The queues at the border and heightened suspicions from both sides have severely impacted the border's ‘openness’.

Against the Defence Minister’s hope for unity, within the Russian communities of Estonia, there has been a concern from the chief executive of the International Center for Defence and Security, Dmitri Teperik. He stated that in Narva, there is a “small, but real group of pro-Putin residents with toxic views”. In conjunction, Estonia has seen an increase in the arrival of British troops in Estonia in recent weeks, who have been proudly brandishing weapons to the British press. Lieutenant Colonel Rupert Streatfield was reported by the Sun Newspaper as saying, “It’s to defend. We’re ready to anything…There is swagger among the troops.”. To the ethnic Russians, who have lived in Estonia for decades, this cannot be a welcome remark.

From the grey passports to the language barriers, there is a framework of division that could form a catalyst of dissidence in this community. While in Tallinn, I saw anti-Russian and anti-war placards adorning the Russian embassy (as pictured) and clearly, this sentiment is not shared to the same extent in Narva.

Officially, the agenda from the Estonian government in Tallinn is to oust all Russian propaganda, especially from influenceable communities. CNN’s Estonia correspondent stated that before the invasion, “In the absence of a whole lot of Russian language media in Estonia, Russian state media has been left to fill the void, giving people a steady dose of Kremlin propaganda”. However, now that Russian media outlets have been federally blocked after Russia invaded Ukraine, Russian speakers must go out of their way to pick up such media and its associated propaganda i.e. through VPNs. However, Deutsche Welle interviewed a Russian speaking member of the voluntary Estonian Defence League. “Aleksandr Pavlov, who joined the league in 1996, says some of his friends have been admirers of Putin — but he's since noticed a shift following the war in Ukraine. "After the invasion, they changed their views. A world is gone," says Pavlov.” Furthermore, the Estonian broadcasting service has produced more resources for Russian speakers like ETV+ to foster Western integration.

All in all, the feeling seems to be mixed in this community. Some will sympathise with Ukraine and the threat Russia poses to its neighbours’ sovereignty. Many have lived in Estonia for decades or even all their lives and individual loyalties may have changed. Others, however, will continue to be steadfast to their heritage, especially those who still obtain ‘grey’ passports and cannot access the full extent of Estonian influence.