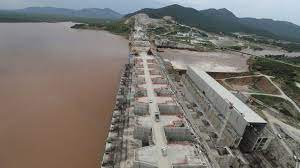 The Nile River is the largest and longest river in the world that rises in the south of the equator and flows northward through northeastern Africa to drain into the Mediterranean Sea. It has a length of about 6 650 kilometers and drains an area estimated at 3 349 00 square kilometers.

The Nile River has been in the center of attention since 2011 when Ethiopia began to build the largest hydroelectric dam that will generate power to the second-most populous country which is Ethiopia. The project that Ethiopia has started has been regarded as a threat by Egypt, saying that the project could cut off nearly all the key sources of water for the Egyptian country's rapidly growing population.

There have been talks between Ethiopia, Sudan, and Egypt over the building of the Grand Ethiopian Renaissance Dam (GERD), but the talks between the three countries ended without a breakthrough and no progress was made. During this Nile River war, there were interventions of international negotiations by the United States of America, which was to meditate, but there was also little progress to the intervention.

Before today the Grand Ethiopian Renaissance Dam that began in April of 2011 was finished in July of 2020, has been filled with water and the Ethiopian country began producing electricity for the first time from this Grand Ethiopian Renaissance Dam (GERD). The GERD that has cost the country of Ethiopia $4.2 billion is expected to produce more than 5 000 megawatts of electricity, more than doubling Ethiopia’s current electricity output and out of those 5 000 megawatts, only 375 megawatts is currently operational. The project manager of the dam Kifle Horo said that “the dam is currently expected to be fully completed in 2024”.

Despite the opening of the dam, Egypt sees it as an existential threat because 97 percent of Egypt's irrigation and drinking water comes from the Nile River. Sudan hopes that the project of the dam will regulate annual flooding of the Nile River but fears its dams could be harmed without the agreement on the GERD operation.

The GERD project will be a huge boost to the development of Africa, and It will help revive the economy of Ethiopia which has been devastated by the combined forces of a deadly war, rising fuel prices, and the Covid-19 pandemic.

The Surge Of War In Our World - Ethiopia's Cry