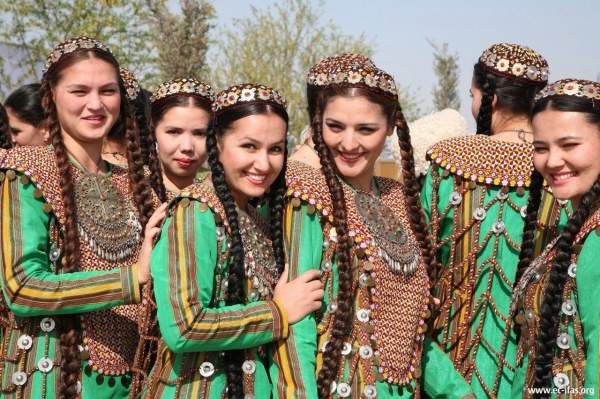 In Turkmenistan, the new President Serdar Berdimuhamedov has banned women from wearing tight-fitting clothes, dyeing their hair, and resorting to cosmetic procedures such as nail or eyelash extensions. The authorities of the country, where the majority of the population is Muslim, have always urged women to wear traditional clothes, avoiding Western-style outfits. The traditional outfit consists of an embroidered ankle-length dress with long sleeves. The traditional headdress is a skullcap embroidered with coloured threads for girls; women often wear a scarf on their heads. Women wear traditional clothes to go to the office, official meetings and social events. Some women still wear Western-style clothes.

The new restrictions also include cosmetic operations. Breast and lip augmentation or even eyebrow tattooing are forbidden. Dozens of women have already lost their jobs and been fined for violations. Women are forced to get rid of the results of cosmetic procedures and pay fines, the size of which is almost half of the average salary in Turkmenistan. As a result of restrictive measures, dozens of beauty salons across the country stopped functioning, having received warnings from the police about the ban on offering “unauthorized” procedures and services to clients. The restrictions are not official but are strictly enforced throughout the Republic.The rules came into force in May after Berdymukhamedov took office.

Serdar Berdimuhamedov, the son of the former President of Turkmenistan Gurbanguly Berdimuhamedov, won the presidential election in March 2022. As follows from the data of the Central Electoral Commission, he got 72.97 percent of the votes. The elections were held ahead of schedule due to the resignation of the former president. It was expected that the new president was going to conduct liberal reforms as his predecessor, who began his presidency with quite serious positive reforms. Gurbanguly Berdimuhamedov canceled the mandatory study of Ruhnama and allowed the Internet in the country.

From the first days of presidency, Serdar Berdimuhamedov has shown the opposite tendency.  Due to the new order, the road police of Turkmenistan does not allow male drivers of private cars to transport women unless they are their relatives. Women are not allowed to sit in the front seat next to the driver. Drivers face a fine of $2,000 in this case. In addition, couples who publicly demonstrate relationship are detained. Dozens of couples have already been detained for holding hands or sitting on a bench in public places. The police accused them of violating traditional principles.

At the same time, there was no official announcement or explanation of the latest restrictions imposed by local authorities and law enforcement agencies throughout the country. Authorities and business leaders hold special meetings to discuss new rules concerning women's clothing, cosmetic procedures and appearance, but refuse to explain the reason or provide a copy of the document prescribing the ban.

"Women in Turkmenistan are extremely dissatisfied with these restrictions," notes Dursoltan Tagayeva, a well–known activist in the country. "Even those who did not support (anti–government activists) are now becoming more and more active and are beginning to express their dissatisfaction with the current situation." Protests and public criticism of government policies are extremely rare in Turkmenistan. However, new restrictions may be the last straw in the cup of people's patience.