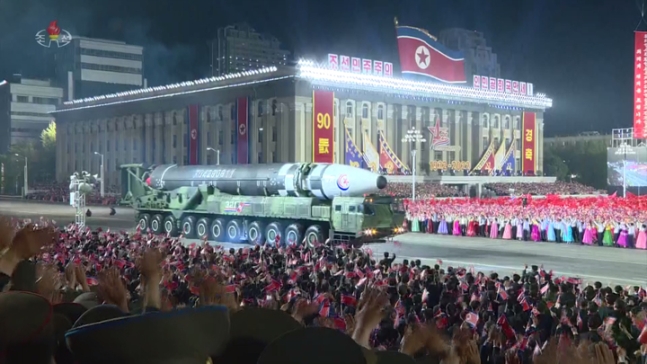 The military parade was held at Kim Il-sung Square in Pyongyang, North Korea around 10 p.m. on April 25. The event was suspected to have been the largest ever with a wide range of new weapons and more than 20,000 troops mobilized.

Kim Jong-un, the incumbent governor presented in the ceremony, delivered his message saying, "If any force seeks to invade the fundamental interests of our country, our nuclear forces will have no choice but to carry out their mission." And he vowed to strengthen the nuclear arsenal, mentioning the possible use of the nuclear weapons.

North Korea has been holding military ceremonies in succession until recently, beginning with the 75th anniversary of the founding of the Workers' Party of Korea in October 2020. The wide range of colorful lighting and fireworks were involved in the event, which is designed to build an internal cohesion.

This was the first time to display the intercontinental ballistic missiles (ICBMs), the Hwasong-17, the largest they have. North Korea test-fired the Hwasong-17 on Feb. 27, March 5, and March 16. During the launch on March 16, it exploded in the air. It provoked widespread condemnation from the international community, but Mr. Kim was never deterred by the condemnation.

According to the official North Korea media, the new missile equipped with nuclear warheads, saying, "Strategic missile squadrons have emerged, showing off their ability to carry out a war that can respond to any mode of war in any space in the sky, earth, sea, or space, and resolutely subdue and crush the enemy."

Also, the media reported that "the super-large radiator squadron, one of the absolute arsenals of shipbuilding that is not in the world that can be devastated by a preemptive continuous strike at any moment, with the main strike targets in the area of operation within the sphere of control, has advanced with dignity."

This military showcase is in connection with the Ukraine crisis and the South Korea-US joint military exercise, according to Senior Research Fellow, Cho Han Bum at the Korea Institute for National Unification said in an interview with MBN news.

In response to the ceremony in North Korea, the officials in South Korea criticized the parade for showing off the menacing weapons, which outwardly called for peace, but the actual intention behind is to develop the means to threaten world peace, the Won Il-hee, deputy spokesman said.