North Sentinel Island: Let Them Be 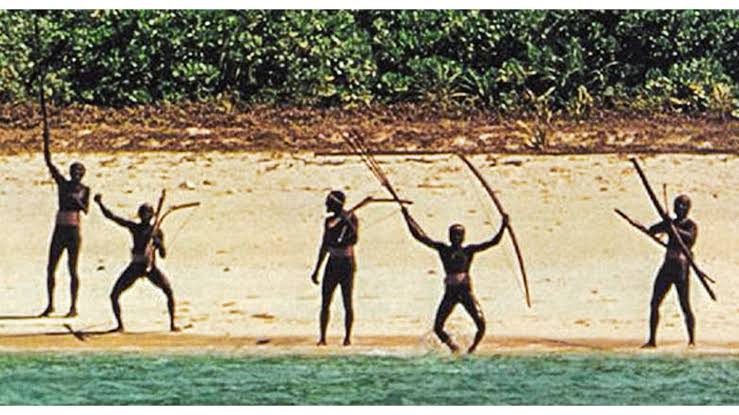 An Island, Andaman and Nicobar Island, situated in Bay of Bengal, 50km west from Port Blair - North Sentinel Island. The island prohibits the entry of outsiders on the island and any approach within the 9.6km of the island is restricted. Protected by the Andaman and Nicobar Protection of Aboriginal and Tribes act 1956, the Forest Act, and Restricted Area Permit regime. The residents of the island - the Sentinelese - we have yet found out what they call themselves - are indigenous people and desire to be left alone, from time to time they have protected their voluntary isolation and often became violent defending it. It is believed that Sentinelese has descendants of Africans but 60,000 years ago and may have come here as deliberate migration or group drifting off-course.

In 1771, a British surveyor john Ritchie, passed by the island by a surveying vessel of East India Company and observed ‘multitudes of lights’. In the middle of 1867, an Indian merchant ship was wrecked on the reef near the island, reached the island with a boat, and fended off the attacks of the Sentinelese. The 106 survivors were eventually found and rescued by the Royal Navy rescue party after a week. Another tribe of people of Andaman island, Onge has very similar traditions and culture to the Sentinelese, of what has been observed. Onges were brought to sentinel island in the 19th century by the British but they couldn’t understand the language so the gap of separation is major.

A British government administrator, Maurice Vidal Portman, and his group reached North Sentinel Island in hopes of researching the natives and their customs. They abandoned villages and a network of pathways that led to them. 6 natives were kidnapped after several days, in which 2 were couples and 4 children, and taken to Port Blair. The officer inscribed the gross organization ‘sickened promptly, and the aged man and his wife died, so the four children were sent back to their homes with quantities of presents.’ The second time Portman visited the island was in 1883 and visited several more times between 1885 and 1887.

After independence, exploratory parties of India kept visiting the island every few years since 1967 to retain friendly relationships with the Sentinelese but every expedition was unsuccessful. In 1981, ship Primrose ran ashore but got stuck in the coral reefs of the North Sentinel Island and the captain radioed for assistance. The next day crewmen noticed that some men-who were naked- were building boats and were carrying spears and arrows. The captain radioed for the demand for firearms and was in urgent distress. Until then they kept the tribe at bay with axes, pipes, and flare guns. But they did not earn any because the enormous hurricane kept other ships from entering them which also halted the process of Sentinelese. They were rescued a week later by helicopter of Indian Oil and Natural Gases. And the shipwrecks were foraged by the Sentinelese for iron.

In 1991 the first-ever friendly contact was made by the team of Triloknath Pandit, director of Anthropological Survey of India. In that team was Madhumala Chattopadhyay, the first female anthropologist to make contact with the Sentinelese. They approached the island on a small boat, saw men with arrows and spears made of wood. The team started dropping coconuts- used it overcome the barrier of communication- towards the shores and then the Sentinelese men came into the water to collect the coconuts (they are novel products because they didn’t grow on their island). They visited two more times in which the last one was a disappointment because there was no one at the beach and they returned. The message was clear that the Sentinelese wanted to be left alone. After that, the authorities decided to reduce the visit to the island to protect them from the diseases to which they have no immunity. The visits to the island were ceased in1997.

After the ocean earthquake in 2004, the government sent a helicopter to observe the island and its habitant, and it seems that they survived because the Sentinelese chased the helicopter away by shooting arrows at it- which were now tipped with iron. In 2005, the Andaman and Nicobar administration stated that they have no interest in pursuing any relationship with Sentinelese and interfering in their lifestyle. Two fishermen were fishing in the illegal water spent the night on the boat all through which their boat drifted toward the island and was killed by the tribes’ men in 2006.

Even though the island is restricted, in 2018, a US missionary John Allen Chou was killed by the Sentinelese during his illegal trip to a restricted island for preaching Christianity to the Sentinelese. Seven other people were arrested for assisting the illegal access to the island- five fishermen who were hired by Chou and dropped him on the island and the other two were Chou’s accomplices. The fishermen told the police that they saw a dead person being dragged and buried by the tribes’ people. The Sentinelese were not charged. The Sentinelese continues to violently resist contact with outsiders attacking anyone who comes near.

The rights of the people of the island are non-negotiable. The Sentinelese wants to be left alone and they should be. It is stated in the policy document of the Anthropological Survey of India that the rights are unassailable and uninfringeable and they should be protected by the state therefore the island should not be cast for any commercial or strategic gain. The Sentinelese are classified as the particularly vulnerable tribe group because their contact with the outside world is almost none. Any contact will be the reason for the diminishment of them as it has caused to the Great Andamanese tribe during the 19th century which brought down their numbers from 5000 to 1858.

The Sentinelese has opted for voluntary isolation and they should be because the outside world holds the potential to wipe out the entire tribe. We don’t know how they are handling themselves or thriving. But they have done it for many years without any outside assistance. Let them be because Sentinelese is considered to be one of the most untouched tribes in the world.