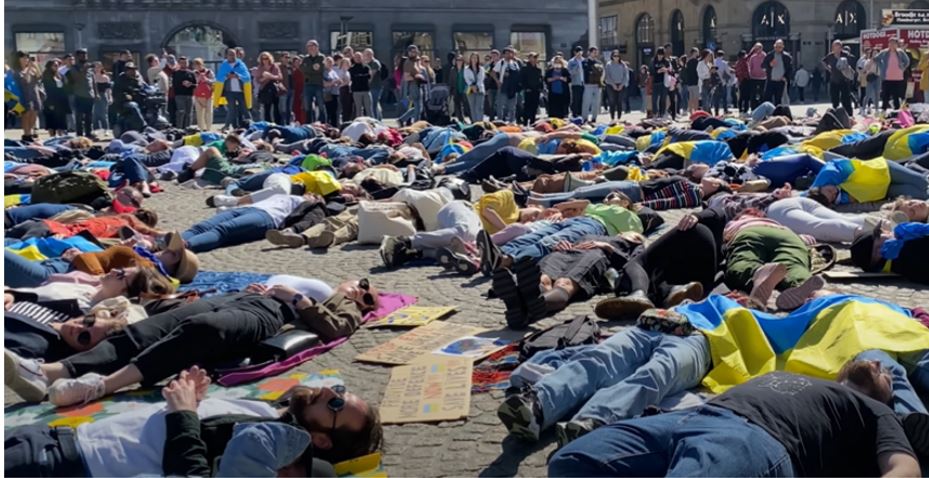 As European societies were shocked by, and condemn, the Russian invasion of Ukraine, Amsterdam is thus one of the European cities that are joining the similar rallies devoting attention to the Ukraine crisis. The rallies against the war in Amsterdam lasted almost 2 months after Russia invaded Ukraine from the end of February to April.

The first rally was a national scale protest 3 days after the Ukraine crisis, the first Sunday, April 27 in the different cities across the Netherlands including Amsterdam, Maastricht, Nijmegen and The Hague.

Protesters demonstrated against the Russian invasion of Ukraine, with a sea of blue and yellow of Ukraine flags as they surrounded and chanted at Amsterdam's Dam. Some Russian people joined the protest against the war and the Russian government.

Also, the Facebook page of the Peace for Ukraine campaign asked people to stand in solidarity with Ukraine, support refugees, and call for peace and freedom in Ukraine. Activists held a speech in Dutch, English, Ukrainian, and Russian during the demonstration, emphasizing that the Ukrainian war is a war against Europe. Protesters called for peace and closure of the airspace over Ukraine and to stop SWIFT payments to Russia.

One week later, the public gathered again on March 6 in several cities like Amsterdam, Maastricht and Roermond. In Amsterdam, the demonstration was held at 2 pm in Dam, the same spot as last week. Pax, DeGoedeZaak, Free Press Unlimited, the group Ukrainians in the Netherlands joined the demonstration to support Ukraine. In Maastricht, over 150 people participated in the march.

Next week, the gathering was organized again by the public and the Netherlands government at Dam square, Amsterdam on March 12. The government stated Amsterdam is answering the call of Eurocities, the network of European cities to show solidarity with Ukraine and support the Ukraine people.

Femke Halsema, the Mayor of Amsterdam, opened the event with a speech. The program included music, songs and a variety of speakers, the Netherlands Philharmonic Orchestra, Trijntje Oosterhuis and Dwight Dissels, the Amsterdam Andalusian Orchestra and a refugee student’s speech. The event ended with 2 minutes of silent performance.

The latest protest took place on April 17 in Amsterdam. The Ukrainian community played a flash mob where people played dead lying on the ground to remember the victims and the devastating impact of the ongoing war in Ukraine. The protesters demanded further sanctions on Russia and called for peace in the demonstration.

Why Russia Wants to Annex Ukraine