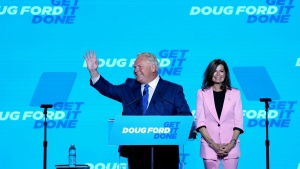 On Thursday, June 2, the provincial elections in Ontario took place. The Progressive Conservatives won the election, and Doug Ford was re-elected as the premier of Ontario; he was also re-elected as a representative for Etobicoke-North. The polls opened at 9 am and closed at 9 pm, giving all eligible voters in the entire Ontario 12 hours to vote for their desired candidate. Shortly after the polls closed at 9 pm yesterday, the Progressive Conservatives were announced as the winners of the 2022 provincial election.

The Ontario Progressive Conservatives were elected into eighty-three of the available one hundred and twenty-four positions. The party with the second most positions would be the NDP with thirty-one positions; the Liberals were able to secure eight jobs. The Greens and another independent candidate secured the remaining two positions.

Following his re-election as premier of Ontario, Doug Ford appeared before a crowd at Toronto Congress Centre. There he expressed his gratitude to the audience for his re-election. He spoke about economic growth and how he plans to make the economy experience growth by making changes and providing more jobs. He promised to build a better future for people living in Ontario and Canadians.

During the campaigns, he was able to get endorsements from distinguished municipal and union leaders, which he did not fail to address during his speech. Following his election as premier of Ontario in 2018, his popularity was affected because he made several budget cuts to various ministries like healthcare and the environment at the beginning of his first term.

During the campaign for the election, he was the frontrunner and face of the PC party. During his speech, he revealed that his team knocked on more than three million doors during his five-week campaign. This helped the party in that the Ontario Progressive Conservatives secured more than 41 percent of the votes, similar to the number of votes they got in the 2018 election. He promised to build more infrastructure like new hospitals, Brantford Bypass, etc.

Following the announcement of the Progressive Conservatives' win, a few leaders of the other parties began to make statements about them stepping down from their position as leaders of their respective parties.