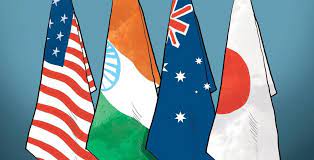 The Quadrilateral Security Dialogue, or Quad, is a strategic security dialogue that takes place between India, Australia, Japan, and the United States. All the QUAD leaders are meeting in Tokyo for the second Quad summit.

Geopolitical alliances have long been a part of India's foreign policy. India has prioritized retaining bilateral ties with countries for regional benefits. India has been able to opt out of any bloc while still participating in key debates that can affect minor achievements in its favour. However, after the border dispute with China last year, there has been a rapid transformation.

The Quadrilateral Security Dialogue (QUAD) is an informal strategic group constituting four countries: the United States of America (USA), India, Australia, and Japan. One of the Quad's main objectives is to foster an Indo-Pacific region that is free, open, wealthy, and inclusive.

The group initially convened on the fringes of the Association of Southeast Asian Nations in 2007. (ASEAN). It is an alliance of marine democracies, with all member countries participating in meetings, semi-annual summits, intelligence exchanges, and military drills.

India has begun to participate in international multilateral alliances that can help it counteract any security threats. The Quad was founded in 2007, but tensions between India and China in the Galvan Valley in 2020 reawakened it. It has found its footing in the Middle East by joining the New Quad, which will allow New Delhi to expand its position beyond its immediate neighbours. This unique multilateral partnership will assist India in broadening its global horizons.

The leaders of the Quadrilateral Security Dialogue (QUAD) increased their scope of cooperation during their September 2021 conference in Washington, DC, to include climate change, emerging technologies, space, cyber security, and developing next-generation talent. Leaders promised to ensure a free and open Indo-Pacific region that is economic and inclusive during this summit. Given India's current economic relationships with QUAD members, the QUAD could provide India with significant economic benefits. These advantages could be realized in five different ways.

1) India's soft power is strong in the Middle East, where it has approximately 8 million diasporas. India may benefit from significant potential such as Big Data, Quantum Computing, and expanding its export market.

2)The alliance will focus on non-military concerns such as commerce, energy, and the environment, as well as the promotion of public goods.

3)It will give India a platform to pursue regional multilateral relationships. This region attracts major powers such as France, Russia, and China. As a result, it will assist India in defining its geopolitical stance.

4)Rare earth minerals supply:  Several critical minerals, especially rare earth, are heavily reliant on China in all QUAD economies. Rare earth metals are made up of a small number of elements, including the 15 lanthanide elements on the periodic table and two other closely related elements, scandium, and yttrium. Metals are used in a wide range of high-tech products, including smartphones, computers, hybrid automobiles, wind turbines, and solar cells, to name a few. Both the United States and Japan have already faced catastrophic consequences as a result of China's threat to disrupt the rare earth supply. India holds 6% of the global deposits of this mineral and has the potential to play a key role in its development.

The Quad has been criticized by China, which sees it as a mechanism to contain its worldwide rise. The 'Quad alliance,' as China calls it, is a mechanism to keep it from rising. The Malabar naval exercises have been repeatedly denounced by Chinese media as a threat to regional stability. It also claimed that the naval drills were part of a strategy to curb China's rise, referring to it as "the Asian NATO." China is afraid that if India joins forces with other powers, it will cause massive issues for China. China is also concerned about the possibility of South Korea joining the Quad. Aside from that, other countries have begun to regard the Quad as a critical tool for countering China.

China has also spoken out before the Quad Summit 2022, claiming that the US-led Indo-Pacific policy is a ruse to sow divides and foment conflict in the area.

According to PM Modi's departure statement, the Quad Summit 2022 will provide an opportunity for the four leaders of the world's leading economies to review the progress of the grouping's initiatives as well as exchange views on developments in the Indo-Pacific as well as global issues of mutual interest. PM Modi stated in his leaving statement that a review of Quad activities is one of the four world leaders' top priorities. On May 23, Prime Minister Modi attended a launch ceremony for the Indo-Pacific Economic Framework hosted by US President Joe Biden (IPEF). The US President and Prime Minister Modi will meet in a bilateral discussion to discuss the future of India's diverse bilateral relations with the US. The two leaders will also continue their conversation about regional growth and current global issues. It will be a continuation of their previous discussion about how they see the situation in Ukraine. The Indo-Pacific Economic Framework for Prosperity intends to strengthen regional ties by establishing common standards in sectors such as renewable energy, supply-chain resilience, infrastructure, and digital trade. The leaders of four countries met virtually in March 2022, and the Ukraine conflict was one of the main topics discussed during the Quad summit. A free, open, and inclusive Indo-Pacific region, maritime security, emerging and essential technologies, climate change, and challenges will all be discussed during the Quad Summit Japan. PM Modi will meet with the Indian diaspora, prominent business leaders, and other dignitaries in Japan to strengthen India-Japan ties.