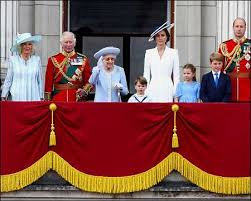 Queen Elizabeth II, reigning Queen of the United Kingdom and other countries of the Commonwealth since 1952, became, in 2015, the longest-reigning monarch in British history. Today we celebrate her Platinum Jubilee to mark the 70th anniversary of her becoming Queen.

Queen Elizabeth II, after her father’s death, King George VI, became Queen at age 25. Since that day, she has been one of the greatest symbols. According to the website “Angleterre” (French word for England), an interesting survey showed that more than 69% of the British people think that the monarchy is a good thing for the country, compared to only 22% who think it is not.

It is an art to dress the one who draws the most attention and is photographed the most. From blue, green, fuchsia, yellow, red, or pink, she is unmissable. It makes her easy to spot. Yesterday, it was for her platinum jubilee that people saw her dressed in a light but vivid blue dress and hat. However, no matter how she is dressed, there are two things that will never change: her three-strand pearl necklace and her sparkling brooch.

Her majesty waving at the crowd, standing and surrounded by her family, made the people assisting in the Platinum Jubilee more than happy.

First, let’s answer the question: what does it possibly mean? It is a four-day event from the 2nd to the 5th of June to principally honor and respect the royal’s service to her nation. Even though the official date is February 6, when in 1952, she originally acceded to the throne, it will only be on the 2nd of June, 1953, that her coronation will take place.

Many events are organized throughout the year and broadcast to share the celebration with the world. Starting from the Queen’s Birthday Parade on the 2nd, to the service of thanksgivIng at St Paul’s Cathedral on the 3rd, the Epsom Derby and the Platinum Party at the Palace on the 4th, and the Windsor Big Lunch on the 5th, the royal family already gave an incredible show to the world yesterday, during the parade, as not all the events can be completely shown.

As it is a special year for those who support the royal family, the Platinum Jubilee is not only defined by the events mentioned above but also by, just to name a few, a platinum pudding competition, for example, or a royal family spring world tour.

Nonetheless, the Queen assisted with all the events that took place yesterday, June 2nd, but today, it is with surprise that she did not come to St. Paul’s Cathedral. At 96 years old, the Queen might need to stay away to rest for further events.

This year, it will be 70 years since she became Queen Elizabeth II, which makes her two years away from becoming the world’s longest reigning monarch, who is still alive today, French King Louis XIV, who ruled for 72 years. All we wish for is to see her majesty go that far.